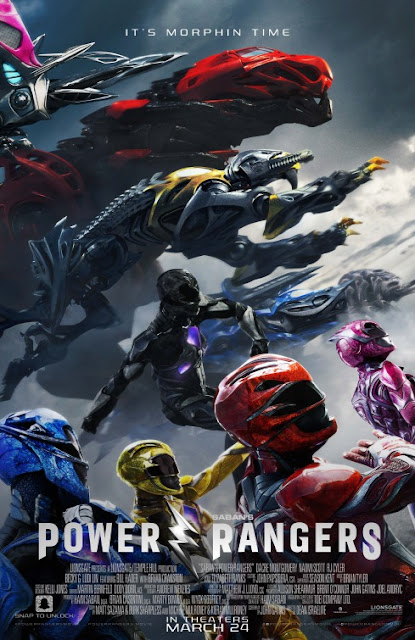 Someone at Saban Entertainment (the company that owns Power Rangers) obviously wanted to make a live-action feature film about the Power Rangers in order to cash in on the craze of big-budget live-action movies adapting childhood TV shows with massive nostalgia-driven fanbases. And so, lo and behold, the resulting project is Saban's Power Rangers, a $100 million budgeted motion picture whose starting premise basically amounts to "What if we merged The Breakfast Club and Pacific Rim into one movie?". That very much sounds like two motion pictures that should never ever be mashed together but they've gone and done just that. The resulting movie is....actually not bad, much better than I expected it to be, though this whole thing carries more than a few major shortcomings to its name.

In the town of Angel Grove, there are five high schoolers whose lives are about to be intertwined in a big way. There's jock Jason Scott (Dacre Montgomery), whose recently been placed under house arrest in a plotline that figures heavily in the first fifteen-ish minutes of the movie before being abruptly dropped altogether. There's also mean girl Kimberly Hart (Naomi Scott), whose recent actions have left her without any friends and ashamed, Zack Taylor (Ludi Lin) a devil-may-care dude, the emotionally distant Trini Kwan (Becky G) and the intellectual Autistic individual Billy Cranston (RJ Cyler). All five of these youngsters find themselves in a rock quarry one night where an explosion set off by Billy (in an attempt to find potentially buried valuables in the area) reveals five different color coins, with each of the teens taking one.

The morning after this discovery, all five of them find out they have incredible powers, including super-strength and the ability to jump great distances. It isn't long before they're able to discover a spaceship buried underneath the Earth that is inhabited by the figure Zordon (Bryan Cranston) who reveals why they have gotten these powers; these coins have chosen all five of them to form a new version of a legendary group of warriors known as the Power Rangers to ward off evil like Rita Repulsa (Elizabeth Banks). From that point on, we get some training montages, sassy dialogue from a robot named Alpha-5 (Bill Hader) and a bunch of robot dinosaurs (naturally).

Despite what seems like an overly convoluted premise in the way I've retold it, Saban's Power Rangers mostly works as a story, which may be the surprising part of it. Oh there's plenty of story flaws in here, such as the aforementioned house arrest Jason's been placed under that goes nowhere, the clunky way it tires to introduce all five lead characters in short order while the personal arc of Kimberly gets severely undercut by a moment in the climax involving personal revenge that feels puzzling at best and woefully miscalculated at worst. To boot, the plot's climax has a few moments of fun craziness and one pretty nice character moment that emphasizes unity, but it mostly just feels obligatory and more often than not direly lacks previously established dynamics or personalities that the individual Rangers have.

All that having been said, the film does otherwise flow nicely as a story, mainly because I knew what was happening and why people are doing things. The Rangers have to train to stop Rita while Rita is building a golden monster to get a powerful crystal. Cool. That's all decently established early on and makes it easy to follow the budding relationship between the lead characters and them coming to terms with their newfound status as superheroes. Believe it or not, that part of the movie is actually one of its best assets, since the main cast bounces off each other well, coming off like real teenagers and a decent depiction of how people in that age group interact. Plus, the film's good at giving individual personalities to the leads that mostly work, except for Jason and his arc of "making poor decisions" which just feels like it sputters out and goes nowhere.

Otherwise though, the individual members who make up this new team of Power Rangers are decently realized and the film is surprisingly deft at handling the darker subject matter (such as Zack's ill mother) that makes up their backgrounds. Trini even gets a monologue about her parents wanting her to be "normal" in terms of what friends she has, clothes she wears and her sexual orientation that feels raw and like something an actual teenager whose finally opening up would say. And then there's Billy, maybe the highlight of the whole movie. I'd heard during the week prior to this movie's release about Billy being on the Autistic spectrum and though I was excited at the prospect of an Autistic superhero existing in American cinema, I also carried a lot of worries on how they would handle that aspect of his personality.

To my happy surprise, Saban's Power Rangers handles Billy as a character quite well, treating him like a human being instead of a vehicle to teach non-Autistic characters lessons, a role far too many Autistic individuals are relegated to in American cinema. The writers of this project deserve major props for handling an Autistic character with such grace as does RJ Cyler for playing the character so well. Way less successful is the camerawork of the motion picture as a whole, which all too frequently utilizes handheld cameras that shake constantly even during tranquil dialogue scenes. As the movie goes along, it uses this type of filming style less and less, but good Lord, are the awkward uses of abruptly zooming in and zooming out of certain shots aggravating. There's some similarly stilted shooting choices (the Power Rangers first confrontation with Rita at the docks is shot from a notable distance away in pitch black darkness, rendering the scene visually incoherent) throughout that diffuse the fun vibe the movies trying to give out.

Conversely, maybe the best element of Saban's Power Rangers is its ability to freely embrace the science-fiction elements of the plot. Like I said earlier, this thing has heavy elements of The Breakfast Club in its first act, so the story starts off on a more realistic note, but once it comes time to introduce aliens into the story, it does so without even blinking. Even better, it does so without shoehorning in contrived explanations for things. The villain has the world "repulse" in her last name just because, Alpha-5 is just a robot helper, the Zords aren't acronyms for anything, they're just called that. Just letting goofy science-fiction be goofy science-fiction? Sounds good to me! Embracing the premises goofiness and a much-appreciated lighter tone, plus the surprisingly well-realized characters, put Saban's Power Rangers certainly above the low expectations I had walking into this one. Despite some seriously irritating and distracting filming choices frequently popping up and some notable storytelling missteps, I just can't dislike a movie that has scenery-chewing Elizabeth Banks (in a fun over-the-top turn as the villain) making rock monsters to the tune of an awesome Kayne West song. That's the kind of stylized tomfoolery that makes Saban's Power Rangers a pretty fun time-waster.
Posted by Douglas Laman (NerdInTheBasement) at 1:54 PM