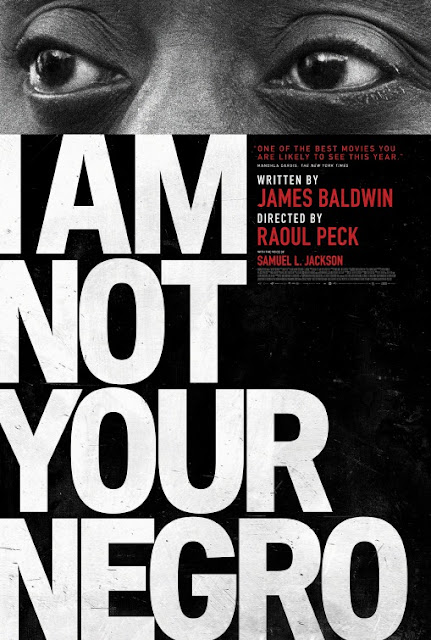 James Baldwin has got to be one of the most influential writers of the 20th century, a man whose perspective on the struggles of African-Americans through this century and how it relates to centuries-old oppression is revered throughout the literary world as a crowning achievement and a vital look into the psyche of the disenfranchised. Tragically, I have been unfamiliar with his pieces of writing, though the Oscar-nominated documentary I Am Not Your Negro offered up a prime opportunity for me to get more acquainted with this prolific author and the words he's weaved on racial struggles in America.

Raoul Peck's documentary relies nearly entirely on James Baldwin's text for dialogue, as Samuel L. Jackson reads aloud, as James Baldwin, passages from the man's writing as narration for the documentary. The topics explored in the select pieces of Baldwin's oeuvre that are read aloud include Baldwin's relationship with 1960's civil rights leaders Martin Luther King Jr. and Malcolm X as well as his own interactions with other similarly well-known individuals fighting for equality and how the anemic portrayal of African-American in American cinema throughout the decades depict an extremely narrow and unrealistic definition of what it means to be an African-American in this society.

From the first line of dialogue in I Am Not Your Negro, it becomes clear why James Baldwin's writing have emerged as an essential tool to understanding the African-American experience. Baldwin is not here to comfort White people and offer theme peace (which is something that Baldwin believes various pieces of cinema that star African-Americans, like The Defiant Ones, solely exist to convey), rather, he is here to shed light on the unique struggles facing African-Americans who just want to live their lives, chase their own individual dreams and garner a reasonable education without being tormented and spat upon by white bigots. In the the mid-20th century, when so many African-Americans were fighting for their God-given rights and were being silenced by white oppressors, James Baldwin was here to be their voice, to speak out against the darkness with his words.

And wow, what powerful words he weaves. The man has such an eloquent way of describing the experience of living amongst societally-ingrained hatred, what it's like to lose men and women like Malcolm X or Martin Luther King Jr., people who were like family to you, to senseless racist violence. There is a graceful despair in the way James Baldwin delivers his words in the segments of this movie where we get to see the real figure be interviewed, as he describes these horrible situations stemming from systemic racism in a steady manner that lets every devastating experience or all-too-true perspective seep into the listener. His vocal cadence in these fascinating interviews shows that James Baldwin has much to say on life-or-death matters and he wants to ensure that every human being in earshot gathers every word he says.

Samuel L. Jackson does a great job recreating that vocal style in his narration, which comprises the lion's share of the documentaries dialogue. Jackson commands a weary but wise nature to the way he reads aloud pieces of writing that Baldwin has penned down. This mans never-ending suffering is obviously weighing him down but not enough to stop him from writing about these unique experiences that are providing such inner turmoil. It's incredible how such a large amount of that specific emotion comes through in Samuel L. Jackson's narration, he truly brings the words of this great author to life in a way that reinforces the high levels of wisdom regarding racism and pain stemming from the way he and his loved ones had been treated that drove James Baldwin to speak out and write about the suffering of African-Americans.

Accompanying this narration is a wide array of footage that depicts interviews or speeches given by various real-life figures that James Baldwin was close to, namely 1960's civil rights leaders Malcolm X and Martin Luther King Jr. But it is not just the past that is glimpsed at in I Am Not Your Negro, oh no. Plenty of footage of modern-day examples of oppression of African-Americans is shown, including police brutality enacted on protestors in Ferguson, Missouri to a montage of photos shown of victims of police brutality, individuals like Trayvon Martin and Tamir Rice. This is not a movie looking to show discrimination as solely an element of the past, rather, as a constant in society that makes the lives of so many non-white human beings a living nightmare.

This is the kind of comprehensive look at racial discrimination in America that I Am Not Your Negro pervasively provides and its all built upon the foundation of James Baldwins phenomenal writings. At one point in the feature, Mr. Baldwin makes mention of how white people typically do not want to confront the harsh realities of being a non-white person in this country so they push such realities entirely out of their worldview. Out of sight and out of mind and all that. I Am Not Your Negro looks to provide a gaze on the plight of human beings that many intentionally turn their back on, one that's brought to terrifying life by way of one mans engrossing writing.
Posted by Douglas Laman (NerdInTheBasement) at 6:05 PM