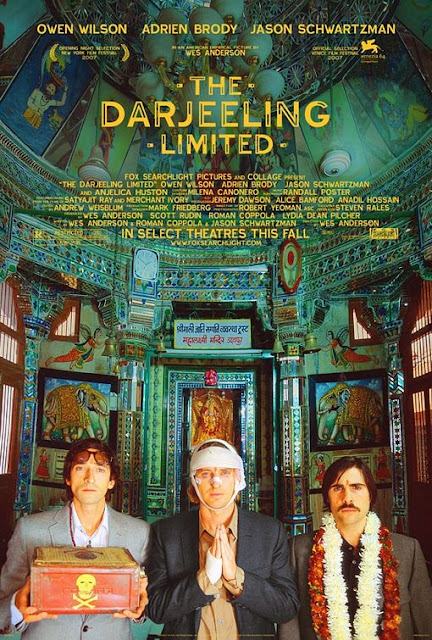 In every Wes Anderson film, the elements of whimsy and reality are always prevalent, with the whimsy usually coming in the form of the sets and dialogue while reality rears its head in the character arcs, plot points and overall themes of the stories. In his three most recent movies, Anderson has found phenomenal success going for more heightened stylized tendencies while also exploring fresh new dramatic terrain that's more complex and mature, helping him solidify his place as a truly remarkable artist. Just before that trio of masterpieces, Anderson created The Darjeeling Limited, which, interestingly, leaned on realism more heavily than a number of other movies in his filmography.

Keeping in touch with your adult siblings is difficult under any circumstances. For the trio of brothers that headline The Darjeeling Limited, their individual lives has made them grow distant from each other. Francis (Owen Wilson) has decided to invite his brothers Peter (Adrien Brody) and Jack (Jason Schwartzman) on a journey through India that he hopes will get them closer to each other and help them track down their mother. But the moment the three actually get on a train together, tension immediately begins to rise amongst the group, setting into motion a number of events that both challenge and strengthen the bond behind the lead group.

Right from the moment this story starts, it' is interesting to see a Wes Anderson movie inhabiting a more realistic plane of existence, one that still carries Wes Anderson's trademark idiosyncratic style of dialogue and even the train cars the three brothers travel in certainly carry the filmmakers more heightened visual tendencies. But The Darjeeling Limited is more like early Wes Anderson effort Bottle Rocket in that its characters occupy very real environments while usually wearing more subdued costumes. That's a unique approach for this director and one that allows for some moments of vulnerability from its lead characters to really hit home.

Unfortunately, that more realistic tone other times feels like it's smothering the characters, since there's such a quiet restrained tone to much of the movie yet the characters carry these very broad personalities that don't have the depth necessary to feel at home in this more somber aesthetic. Thus, the tonally disjointed plot leaves the individual characters arcs of the three leads missing some of their intended impact while the world carved out by The Darjeeling Limited also suffers from this tonal clash by just not being incredibly memorable or entertaining on its own merits, especially since it typically uses the Indian backdrop as merely that, a backdrop instead of incorporating it into the story in a more interesting way.

Luckily though, the three lead actors still give strong performances that make all the difference in the world. Frequent Wes Anderson collaborators Adrien Brody, Jason Schwartzman and Owen Wilson all provide memorable turns and lending both humor and depth to their individual personalities. Brody gives Peter's inability to cope with incoming new responsibilities (he's a dad-to-be) real nuance, Schwartzman gives Jack this subtle charm while Owen Wilson conveys real inner sadness (to match the exterior pain the character is going through after a motorcycle accident) at how distant he and his in-film brothers have become.

Another frequent Wes Anderson fixture bringing some high-quality elements to the table is Robert Yeoman, who shows up in the role of cinematographer to utilize the unique landscapes and other notable visual opportunities provided by various spots in India to create plenty of excellent imagery.
He helps make The Darjeeling Limited wonderful to look at, though would you expect anything less than ravishing visuals in a Wes Anderson film? Even if it struggles more with balancing out the whimsy and the realism than his best movies. The Darjeeling Limited is still a swell effort from Mr. Wes Anderson, chock full of the kind of great performances, strong camerawork and memorable humor (I'm still cackling over Jack's use of a mace gun) that we've all come to expect from this renowned auteurs work.
Posted by Douglas Laman (NerdInTheBasement) at 9:15 AM