Skip The Shack And Go Stay At The Love Shack (Baby, Love Shack!) Instead 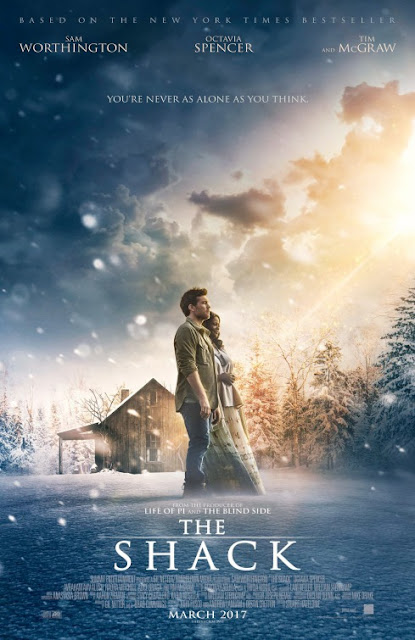 In terms of the general type of quality found in the Christian movie subgenre, The Shack is slightly better than average, which means, for general cinema, it lands slightly below mediocre. That's a drastic improvement over the likes of the two God's Not Dead movies, but it's still plagued by plenty of sins, er, flaws, of its own. Based upon a book I've never heard of but a lot of people I know just can't stop raving about, The Shack attempts to separate itself from many other recent Christian movies by tackling some darker material in its plot, particularly within the confines of a prologue that seems like it could easily serve as a supervillain origin story.

In this prologue, we see our main character of the movie, Mack Phillips (played as an adult by the star of the biggest movie of all-time, Sam Worthington) watch as his mom is beaten by his father, then we get to witness a young Mack get beaten by his father and then the youngster, unbeknownst to his father, pours poison into the liquor his dad consumes so frequently. Like I said, this is the kind of stuff that informs Batman villains. Right after that grisly opening sequence, we cut to adult Mack living a happy life as a husband and a father of three....but then, one day, his youngest daughter is kidnapped and murdered, leaving him in a state of inescapable woe. Time passes, and as Mack is still coping with grief, he is invited to stay at The Shack, a place where God, known as Papa (Octavia Spencer) invites Mack to stay awhile and maybe learn some lessons on how to cope with his grief.

From there, we get all sorts of quick situations where Mack gets to gain a valuable lesson in regards to how to improve his life. And this is where The Shack kind of just goes down the drain, since it introduces a bunch of dark material (child abduction and murder, namely) and then tries to resolve such grim predicaments with cheesy moralizing that wouldn't make the cut on a subpar Hallmark greeting card. Some of these lessons even seem to come straight out of nowhere, such as a lesson for Mack involving him not to judge people, with the lady delivering this lesson saying he's always judging people based on their behavior and skin color.

That came as a surprise to me, the viewer, since nothing I've seen from Mack up to that point suggests he's particularly judgemental, let alone judgmental in the sense of race. So this scene ends up being both too schmaltzy to fit into the darker plot points that have preceded it and is also abruptly introducing a new character flaw to Mack's personality. This is also a scene where the final moral ends up being "Don't judge people", specifically referring to Mack's dad. For some reason, this lady (who we never see again) is concentrating on the fact that eight-year-old Mack didn't think highly of his father after he beat him and his mother instead of the fact that Mack murdered his dad. Shouldn't that be a higher priority in terms of lessons to teach?

It's a confusing sequence that sets the stage for the sort of ham-fisted and all-too-easy moralizing that The Shack imparts on its main character and the audience. Look, as a Christian, I'm a firm believer in the power of forgiveness and all that jazz in being a powerful coping mechanism in terms of handling grief, but I'm also aware that, even with the grace of God at your back, it's long hard road that no one ever fully recovers from in regards to dealing with the death of a loved one. The Shack seems to suggest watching a tree grow in a garden and learning not to judge people who beat you as a child is the easiest way to grapple with pain and it just didn't sit right with me, especially since it also deals with these very real and very dark plot points in a way that can't help but feel exploitative.

At least The Shack, compared to stuff like the God's Not Dead movies, feels like somebody on the crew skimmed a few pages of David Thomson's How To Watch A Movie and decided to use some of the differing camera angles discussed in that text. Also a highlight is Octavia Spencer as Papa, with Spencer bringing the personality traits I've always attributed to God (grace, wisdom, kindness) in spades with commendable believability, she's easily the highlight of the entire movie. Meanwhile, Jai Courtney/Garret Hedlund/Luke Bracey/Sam Worthington speaks in a one-note mumble for the entire movie that feels more suited to a lumberjack than a grieving father, though he's mostly solid otherwise even if he dips his toes a few times into over-the-top acting that sometimes feels inappropriate. Even with these virtues at its back though, The Shack still falls incredibly short of even being watchable thanks to the way it botches handling its deeper plot elements. If you want the experience of watching The Shack without actually seeing it, just imagine someone took the basic premise of Manchester By The Sea (though The Shack has nowhere near the craftsmanship, acting or incredible high quality of that Kenneth Lonergan movie, obviously) and then, mid-way through, had every single one of the protagonists problems revolved by some boilerplate platitudes dropped by Bob The Tomato and Larry The Cucumber.
Posted by Douglas Laman (NerdInTheBasement) at 9:53 AM