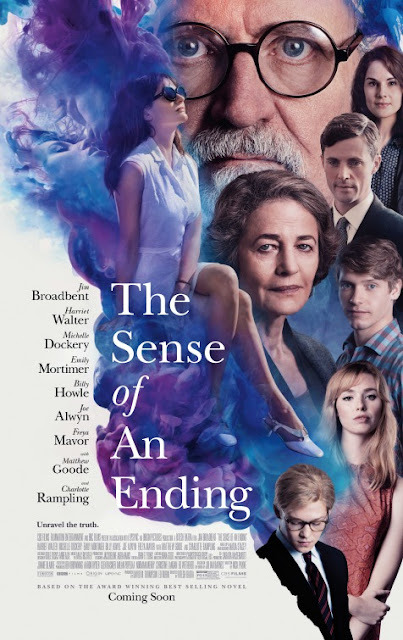 The past is always a difficult thing to grapple with, particularly past regrets and mistakes. Lord knows I myself have spent countless nights sitting in bed thinking about all the social faux pas and other mistakes I've committed over my life and I do not think I'm the only one who's been consumed by such late-night mournful reminiscing. I'd wager very single human being has got their own personal foibles from their past that they can't help but obsess over and Tony Webster (Jim Broadbent), the lead character of the new drama The Sense Of An Ending, is far from an exception in this regard.

For the most part, Tony Webster is mostly known a curmudgeon who runs a camera store, one whose got an ex-wife and a pregnant daughter and an overall decent life. But then he receives a letter in the mail notifying him that, as part of the will from an ex-lovers now deceased mother, he's been bestowed a diary written by an old friend from his college days. In his attempt to obtain this journal, he opens a number of personal wounds, including those of his now also elderly ex-lover, Veronica Ford (played in the modern day segments by Charlotte Rampling). The film constantly flashes back to a younger Tony Webster in college to visually depict what kind of past mistakes are now coming back to haunt him.

I think the main problem with The Sense Of An Ending as a whole is that it feels too...timid, I think is the word. It's a drama so soft-spoken as to leave its entire story lacking any sort of impact at all. Aside from one gut-punch of a twist in the third act, The Sense Of An Ending mostly just plods along with the occasional revelations that come from unearthing new corners of Tony's past feeling way less significant than they should be. This stems from the fact that both the present day and flashback segments are clunkily handled, the flashbacks done in an out of order manner that doesn't enhance the plot and Jim Broadbent not getting much to do in the modern day sequences beyond look concerned and wait for his characters daughter to go into labor.

It's not necessarily a bad idea to present this story in a more subdued manner, but you can easily create plenty of compelling characters in a more muted narrative, and unfortunately, none of the players in The Sense Of An Ending turn out to be all that interesting to watch. That's a shame, since the likes of Jim Broadbent and Charlotte Rampling do give the performances all they got, even if I think Broadbent honestly plays the character of Webster a bit..off. We're constantly told the characters a curmudgeon, and while he becomes more self-absorbed once the prospect of this diary re-enters his life, before that he just seems like a normal guy, and certainly not particularly cranky in both the way the character is written nor in the way it is performed by Mr. Broadbent.

Billy Howle and Freya Mavor do serviceable work as the younger versions of Tony and Veronica, respectively, while I was surprised to learn that, playing Tony's former best pal Adrian was Joe Alwyn, the star of Ang Lee's Fall 2016 misfire Billy Lynn's Long Halftime Walk. Did not expect to see him in another movie so soon, but he does alright works in those flashback scenes. Doing similarly decent but not quite noteworthy work is director Ritesh Batra. The way he films the movie comes off as mostly ordinary, though I like how his wider shots that take place in the city have plenty of action in the background that do make the environments the characters occupy feel like they're realistically lively.

Really though, the adequate directing summarizes nicely how The Sense of an Ending came off to me as a whole, a motion picture that works fine I suppose but didn't leave a lasting impression on me due to some scattershot story and acting choices that rob the twisting-and-turning plot of a good chunk of its potential potency. Real shame on that front given the super talented crop of British actors assembled for the project. Even with that misused cast and the presence of some notably lovely period-era costumes and sets in the various flashbacks, The Sense Of An Ending just isn't able to stick around in your mind long after its, well, ending.
Posted by Douglas Laman (NerdInTheBasement) at 11:47 AM