What Kind Of An Impact Can One Man's Life Have? Andrei Rublev Sets Out To Answer That Very Question 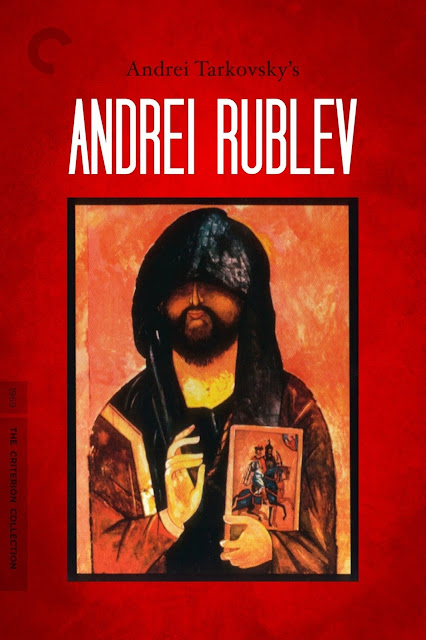 It's gonna be tough for me to review Andrei Rublev, Andrei Tarkovsky's widely raved 1966 motion picture chronicling the life of an actual famous Russian painter. You see, I'm not familiar with Russian history in the slightest, let alone the various portions of the 15th century in that country this movie depicts. This means that, while I found much to appreciate, admire and even be outright enthralled by in watching the feature film, I did find myself feeling like I'd carry a greater appreciation for Andrei Rublev if I carried more familiarity with the time periods it depicts or even was just more accustomed to Andrei Tarkovsky's obviously individualistic style of filmmaking (this is my first time watching one of his movies).

The actual premise of Andrei Rublev is segmented into about eight individual stories, each featruing Andrei Rublev (Anatoly Solonitsyn) in some capacity and shedding reflection on various facets of the human condition, with the depictions of various real-life events in this era (and even flashbacks to events of centuries past, such as one scene showing Jesus being crucified on the cross) reinforcing this concept. For instance, the opening scene kicks off this recurring theme by showing how man's ingenuity, depicted by way of one guy trying out a sort of flying contraption, can inadvertently lead to agony, as seen when the man comes crashing to the ground mere moments after soaring into the sky. Euphoria over being able to travel into God's domain can turn into confusion and sorrow in the blink of an eye. There is no way to escape torment even during our most successful moments.


Grander examples of this idea soon find themselves cropping up in the plot, including a brutal raid on Vladimir, Russia that shows the darkest side of humanity, the level of hideousness a man can accomplish in order to exact revenge on those he feels wronged by. On the other hand, right after this grisly carnage (which includes a pretty disturbing depiction of actual animal abuse that struck me as malicious, cruel, shameful and unnecessary on the part of the filmmakers), we see a portrait of a more hopeful side of the human race when Andrei Rublev takes an orphaned and mute young girl into his custody, trying to protect her from the myriad of horrors that await in this landscape in this process. Just as misery is bound to seep into our happiest moments, it is inevitable that glimmers of hope will be tied into times of our lives marked by despair.

Throughout the various trials Andrei Rublev and other characters find themselves in, religious imagery and ideas frequently crop up. Rublev clings to the teachings of Jesus Christ in times of turmoil like a man holding onto his tiny sailboat in the middle of a hurricane; this is all he has left to tether him to clarity in the midst of wretched suffering. Andrei Tarkovsky's work here certainly seems to be an influence on my two favorite modern-day spiritual movies, Noah and Silence, in that, just like that duo fo 21st century feature films, Andrei Rublev is more interested in examining how faith and the word of God can affect a human being's psyche instead of just being a feature-length commercial for how awesome Duck Dynasty is like the God's Not Dead movies are.

The teachings of Jesus Christ are a catalyst in many ways for the way Andrei Rublev is and how he manages to keep going day-to-day despite all the hardships he's been through. He's going to need something that reliable to lean on in the wake of one of the movies most shocking events, the length raid of Vladimir, Russia. In order to capture the sense of scale of the events Andrei Rublev interacts with in this segment of the motion picture, as well as other stories in the movie, a grandly orchestrated production has been put together under Andrei Tarkovsky's direction, with this extended raid on Vladimir, Russia being particularly impressive in the way it is able to juggle a whole horde of extras, destruction and chaos all while maintaining the more intimate nature of the prior sequences that's made it so engrossing up to that point. Of course, this is also where the aforementioned animal abuse comes in, which made me sick to my stomach and disgusted by Andrei Tarkovsky's contempt for a living breathing creature. I don't care what kind of auteur filmmaker you are, no movie is ever worth killing an animal over, end of discussion.

Anywho, this particular sequence is definitely the most spectacle-driven portion of Andrei Rublev, a massacre intended to turn the protagonists world upside down. Afterwards, the tales intentionally get smaller in scope, as Andrei grapples with raising as mute orphaned girl and later on bounces off a youngster who's been tasked with orchestrating the construction of an extremely important bell. Now we get to see an older Andrei Rublev interact with a new generation of human beings with their own hardships to grapple with. While these final stories may be more compact visually compared to the previous raid sequence, they do manage to show the large scope of impact Andrei Rublev is having on those around him even in these later stages of his life.

Through these final segments of Andrei Rublev, we get to see the titular character attempt to impart the wisdom and strength he's garnered from the teachings of Christ unto two young human beings, both of whom aren't fully receptive to the ideas he possesses. Even when he takes on a vow of silence while he is taking care of the orphaned mute girl, you can see the ways of Jesus Christ emerge from his body language and actions even by accident. Through his attempts to share his wisdom to the next generation, you fully get why Andrei Rublev is still a noteworthy figure not only in his own home country of Russia but all across the planet. This man's actions were bigger than just one person back then and that's only gotten more true as his deeds and stories have inspired countless people over the ages.

Andrei Tarkovsky is incredibly skilled at conveying that specific idea, and numerous other weighty concepts, with a sense of skill in his filmmaking that lends this film a unique atmosphere that only can be properly described as harrowing and profound. Those two words particularly leap to my mind whilst thinking about the final scene in Andrei Rublev, in which majestic music plays as the camera pans over various pieces of religious artwork, the influence of Jesus Christ on these various artists and painters etched into these pieces of artwork for all of eternity. In the course of jotting down my thoughts on Andrei Rublev and the various themes and plot elements it grapples with, my already notable level of respect for this 1966 motion picture has increased mightily. This is a captivating take on theology and its effects on a singular human being, a lofty idea that Andrei Rublev handles with incredible prowess.
Posted by Douglas Laman (NerdInTheBasement) at 2:11 PM