Get Trapped With Overly Familiar But Sometimes Chilling Thrills In Life 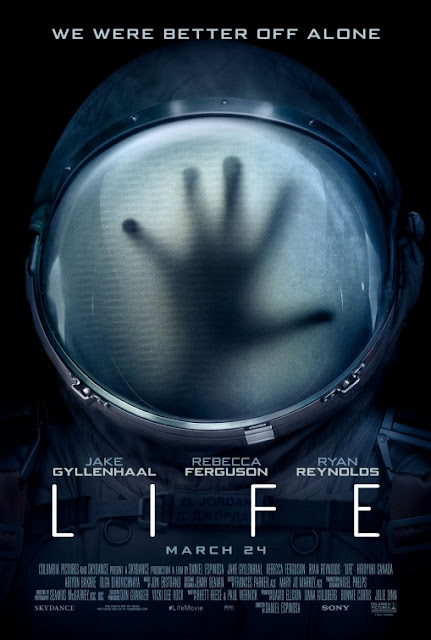 Jake Gyllenhaal has been on quite the roll lately. His exemplary lead turn in Nightcrawler was one of the peak moments of his entire career and even in something more middling like Southpaw Gyllenhaal managed to craft a solid performance out of a subpar script. Last years Nocturnal Animals continued his recent career choices of doing bold and daring projects by offering Gyllenhaal a chance to inhabit a tortured persona to fascinating results. So, of course, after all these challenging dramas, it's no shocker that the next big movie Jake Gyllenhaal is headlining is Life, a science-fiction horror film chock full of blood and mayhem, just like Nocturnal Animals. What I'm trying to say is that Life is the exact same movie as Nocturnal Animals.

Snark aside, let's get into the brass tacks of what we're dealing with with this movie in terms of plot. The crew of a satellite orbiting Earth, which includes David Jordan (Jake Gyllenhaal), Miranda North (Rebecca Ferguson) and Rory Adams (Ryan Reynolds), have just picked up a pod containing samples from Mars that happens to contain an organism that confirms that life can exist outside of Earth! The creature begins to grow just as the team's excitement over being the first human beings to make such a shocking discovery similarly escalates. Of course, if you think there will be only cheerfulness over this breakthrough, you'd be dead wrong.

The alien, dubbed Calvin, soon grows to a large enough size that he attacks a crew member...and then another...and then another. As the body count rises, it becomes apparent that Calvin is a crafty booger who'll do anything to survive and provides immediate danger to the crew and potential danger for those on Earth if they don't kill this thing soon. Basically, Life smashes together an Agatha Christie book with Ridley Scott's original Alien and the results of such a mixture are surprisingly decent, sometimes being nicely chilling but also all around feeling a little too derivative of what it's taking obvious inspiration from.

Familiar storytelling trappings do keep Life from feeling as innovative as it could be, from a sequence where one character ventures outside of the ship that couldn't help but feel like it came straight from Gravity to moments that very much do feel like they crib too much from the original Alien movie from 1979. Similarly distracting is that the characters feel too underdeveloped, especially the two lead individuals, David and Miranda. Despite being played by such a noteworthy actor, David doesn't do much in the story for a long stretch of the plot in the middle of the movie while Miranda comes off as simply a caricature of authoritative figures (yes, the primary, though not sole, female character in the movie is the "mother" figure, which sucks).

Luckily, Life does find success in creating some fun alien-filled thrills, which is what you really want above all else when you plunk down dollars for a ticket to Life. The screenplay is clever in utilizing practically every different area of the satellite as a possible venue for alien-induced carnage and director Daniel Espinosa keeps the grisly action filmed in a cohesive manner that allows for tension to be properly felt by the audience since they can actually see what is going on. Espinosa also does a fine job directing his ensemble of actors to react to the alien horrors happening around them in a way that conveys real fear. Gyllenhaal's character could have certainly used a boost in depth but there's no denying Gyllenhaal himself does a splendid job making the terror David Jordan feels about being trapped in this situation feel all too vivid.

Meanwhile, the alien itself is decently designed, looking a lot like a grey cobra snake in its final form. It did strike me as amusing how the first extremely small in size form for the alien is meant to invoke shock and suspense in the viewer, when, in reality, seeing this tiny critter walking around, picking up needles and causing mayhem is outright adorable. Of course, the alien quickly goes from being a Baby Groot to a more Xenomorph-like creature before long and the mayhem he causes to the various astronauts really needed more originality to it, but I found myself reasonably diverted by the familiar science-fiction chaos that ensued in Life.
Posted by Douglas Laman (NerdInTheBasement) at 12:03 PM