An In-Depth Autopsy Of Daddy's Home 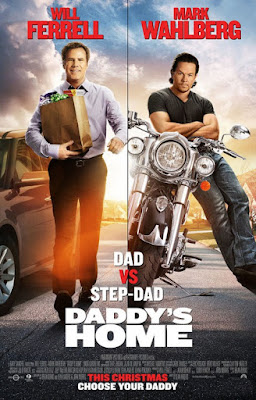 It's pretty apparent that Daddy's Home started out life as a singular concept; a step-dad, played by Will Ferrell, is just beginning to become a real father to his two step-kids when the biological father, played by Mark Wahlberg, re-enters the picture. And then...that's all they got. They didn't bother to write down distinct personalities for the characters in the story, nor a cohesive story structure or, perhaps most egregious of all in a comedy, any jokes to speak of. Daddy's Home isn't entertaining, it's simply 90 minutes of inertia.

Easily one of the biggest problems in the film is that the biological father, Dusty, is a pretty terribly written character. Early on in the feature, the step-father, Brad, is told by his wife, Sara (Linda Cardellini) that her ex-husband is a powerhouse of a man, a rebellious rock n roll kind of dude. This attitude then never once appears on-screen, with the extent of any sort of "rebellious" nature of his personality being limited to his facial hair, an over-sized belt buckle and him driving a motorcycle. Truth be told, he really doesn't have any notable disposition to speak of, aside from being a manifestation of conflict to drop into Brad's life and to generate the one "joke, the movie uses ad nauseum.

Ya see, the closest thing Dusty has to a main personality trait is that ,once he comes into the movie, he's good at everything, and I do mean, everything. Then after he does something awesome, everyone around Brad (who usually does nothing to draw the ire of those around him, sans his drunk escapades at a basketball game) getting mad or indignant at him because he isn't as incredible as Dusty. In fact, Daddy's Home essentially has only that one specific story beat that it drives into the ground and then proceeds to pummel into the asthenosphere. It's not an engaging plot point, and it doesn't deliver any sort of memorable jokes, and to boot, all of the gratuitous mean-spiritedness doesn't have a larger point in the context of the narrative.

So, yeah, this all becomes pretty damn grating by the time the half hour mark whizzes by, and believe you me, despite being only 96 minutes, this damn thing stretches onward into infinity. Despite a very talented supporting cast (consisting of Hannibal Buress, Thomas Haden Church and Bobby Cannavale),  none of these figures get anything remotely funny to do during this seemingly never ending motion picture. Poor Linda Cardellini, a talented actor more than worthy of projects waaaaaaaaay better than this garbage, is stuck being a nagging wife for the entirety of the feature, save for one scene where she (along with Ferrell and Cannavale) gets to ogle Mark Wahlberg's enormous elephant trunk like penis at a fertility clinic.

This omnipresent slipshod nature of Daddy's Home extends to the directing as well, with director Sean Anders resorting to a choppy visual scheme that becomes all the more aggravating as it becomes more and more clear as the feature goes on that there's gonna be no awesome jokes to distract the viewer from directorial shortcomings. That sort of lackluster directing reaches its apex of ineptitude the two times the film tries its hand at visual humor, and as one might suspect, both attempts fail harder than Jeff Dunham strides to be funny. The screenplay (credit to Anders, as well as John Morris and Brian Burns), as I've made abundantly clear, is abysmal, with lack of creativity on display when executing the jokes or the conflict between Dusty and Brad being kind of astonishing. And oh Lord, the forced sentimentality in the final scenes of Daddy's Home, Jesus, there's not even an attempt to make the inevitable resolution between our two leads organic. They just settle their differences (via dancing to Like A G6, which for some reason is playing at an elementary school dance where the finale of the plot takes place) seemingly because there's only a few minutes left in the movie.

By the time the credits began on Daddy's Home, I darted out of the auditorium in a fit of misery. What a woebegone effort that squanders an immense amount of talent and potential on a script overflowing with storytelling platitudes. Our two lead actors seem to be on autopilot (on a sidenote, Wahlberg is woefully miscast in this movie and seems legitimately lost in one or two scenes) and more effort appears to have been put into the Ford Flex product placement (which pops up twice!!!) than into anything of actual relevance to the screenplay. It's pretty apparent that the filmmakers behind Daddy's Home, to quote a police chief/Bed, Bath & Beyond manager from a far far far far funnier Will Ferrell/Mark Wahlberg vehicle, were chasing waterfalls with this abomination.

Posted by Douglas Laman (NerdInTheBasement) at 9:47 AM