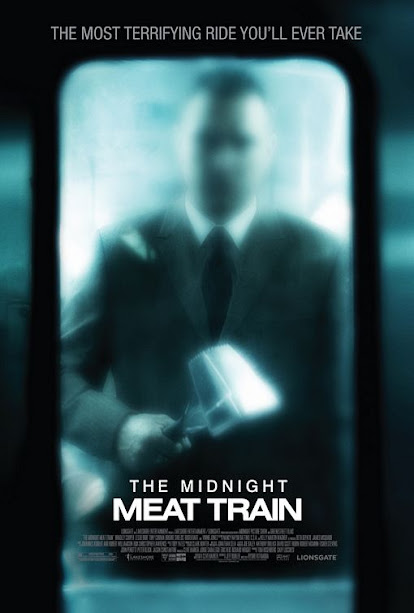 Midnight Meat Train is a classic story of an ambitious man who brings misery unto himself by way of his aspirations. It’s the same story skeleton Icarus played around with decades ago while it’s easy to see a much less gruesome version of this same plot playing out in a Twilight Zone episode years ago. It’s also a concept familiar to the original Hellraiser, which hailed from Clive Barker, who serves as the producer of The Midnight Meat Train and the author of its source material. Anybody expecting anything comparable to the best Twilight Zone episodes or Hellraiser will leave Midnight Meat Train disappointed. Still, this grisly excursion isn’t without its charms.

Leon (Bradley Cooper) just wants to have his photographs seen. Living in New York City, he's surrounded by great opportunities for snapshots that could change his career. While trying to capture some perfect photos, he runs into a young woman who ends up going missing. This strange occurrence leads him to develop a theory regarding a man known only as Mahogany (Vinnie Jones) who works at a local meat plant. Leon is convinced Mahogany is responsible for a string of local disappearances. Turns out, Leon isn't just right, he's stumbled onto a grisly conspiracy involving humans being viciously slaughtered. Leon's investigation into this matter will change his life for the worse and the bloodier.

Sometimes, subtle hints (like which lenses are used or a throwaway line of dialogue) make it clear what era a movie came out in. In the case of The Midnight Meat Train, it’s rampant on-screen depictions of humans being carved up make its apparent this is from the 2000’s, aka the “Torture Porn” era of horror. This kind of gruesome misery existed before Saw (hi Herschell Gordon Lewis!), but usually only in midnight movie releases, not in horror fare intended to play in wide theatrical release. Midnight Movie Train follows in the footsteps of Eli Roth and Alexandre Aja by ramping up the gore and leaving nothing to the imagination when it comes to what this Butcher does to the humans he captures.

Sometimes, the excessive violence yields some interestingly unnerving results. The most memorable instance of this is when the camera takes the perspective of a woman about to be slaughtered by the Butcher. In this first-person sequence told in one long take, Ryuhei Kitamura places the viewer directly into this woman’s terror even after her head gets chopped up. The slow pull-out from her hollow pupils to reveal the massacre left in the wake of this maniac’s carnage proves to be the most unsettling moment in all of Midnight Meat Train. The camera actually switches up which characters perspective it''s replicating quite a bit throughout its runtime. Sometimes we're in the shoes of the killer, sometimes we're in the eyes of the victims, still other times it's a twist whose perspective we're watching things from. This creates a sense of uncertainty that proves sporadically unnerving.

Holding back some of the scariness in Midnight Meat Train is that a number of the more grisly moments are rendered through CGI. Obviously fake CG gore and eyeballs just aren’t all that scary. These distractingly artificial details stand out against the chills generated from either practical-effects work or just Vinnie Jones’ intimidating screen presence. Another odd visual detail; interior sequence set in the daytime have so much light pouring in from the windows it’s like Janusz Kaminski was doing the cinematography! This is neither a compliment nor a complaint. It’s just an unexpected facet of Midnight Meat Train that stuck around in my cranium.

As for the cast, Jones proves to be the most interesting member of the ensemble. His natural 6 foot 6 frame makes him a natural fit for a guy who capable of striking fear into your heart even before you know he’s butchering people. And then there’s our leading man, Bradley Cooper. Midnight Meat Train premiered about a year prior to The Hangover turning Cooper into an A-list leading man. I wonder what the timeline where Cooper’s major breakthrough came with Midnight Meat Train looks like? Anyway, Cooper’s fine here. He doesn’t have much of a discernible personality but he at least commits to this strange premise, there isn’t a hint of jaded cynicism in his performance. This trait is especially useful once Midnight Meat Train decides to just go off the rails, in an enjoyable way, in a bonkers climax that asks the age-old question “What if the Sleestak’s came from Hell?”