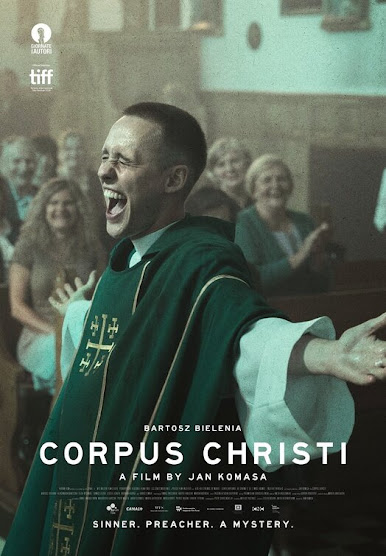 Recently released prisoner Daniel (Bartosz Bielenia) has had his life changed in the slammer by religion. However, any hopes of becoming a man of the cloth once he gets out are dashed by the fact that a former convict could never get the job. But what if nobody knew who he was? What if Daniel got a shot at a whole new life? That's the opportunity Daniel gets after he shirks his new job at a sawmill. Instead of going there, he walks up the road to a small town whose local church is about to be devoid of a vicar. Posing as a preacher, Daniel is offered to temporarily take over the job on the spot. While in this position of power, Daniel finds himself struggling to keep up the facade while also becoming embroiled over local drama stemming from a recent automobile accident.
Maybe it's just the fact that I was reading about this playwright in one of my Graduate courses, but Corpus Christi, a film hailing from director Jan Komasa, evoked the kind of moral complexity seen in the works of Bertolt Brecht. In Brecht plays like Mother Courage and her Children, there aren't heroes and villains, just every day people surviving in a world far larger than any one person. As playwright Tony Kushner once pointed out, Mother Courage can do things, like barter prices while her son's life hangs in the balance, that would inspire immediate hatred in any other play. In the context of Mother Courage, though, such behavior merely inspires one to reflect on the hardships the character of Mother Courage is enduring, the hard choices she's faced with every day.
So it is with Corpus Christi, which is built entirely on a former murderer lying to a small town and taking over as a preacher. Screenwriter Mateusz Pacewicz does phenomenal work in taking such a provocative starting point and unraveling such a morally intricate story from there. In the hands of Pacewicz, we may not always approve of the decisions Daniel makes, but we always understand the psychology behind them. We can see why he'd rather live a lie that could always crumble rather than live a steady but unfulfilling existence rooted in reality. There's layer upon layers of complexity in Daniel's saga and it's all executed so effortlessly.
You're so engrossed by Daniel's story that you won't even realize the masterful screenwriting and directing Pacewicz and Komasa, respectively, are engaging in to bring it to life. That same approach to both morality and subtle craftsmanship is present in all the characters in Corpus Christi, most of whom are dealing with their own form of grief stemming from a car accident that took several lives. Whether it's the townspeople still enraged at the loss of their loved ones or the widow of the supposed drunken driver at the heart of the accident, Corpus Christi organically finds time to devastatingly explore the psychology of each of these individuals.

Lending such nuance to the world of Corpus Christi means you never know where this story is going to hurl to next. Even the arrival of someone from Daniel's old life into this small town doesn't unfold in an expected manner. This commitment to nuance-driven unpredictability means Corpus Christi is just riddled with tension. This level of suspense also comes from how the precariousness of Daniel's newly-crafted existence is made so apparent in even the quietest moments of this production. Both the audience and Daniel are aware everything in Daniel's new could shatter at any given moment. The question of "How long can this last?" lingers over every scene of Corpus Christi to varying degrees.

Nothing lasts forever. That's just as true for new lies we carve out for ourselves as it is for exceptional movies. But it's hard to forget about either those lies or those exceptional movies. Those impactful memories actually can stick around for a long time. Certainly I'll be thinking about Corpus Christi's mesmerizing lead performance from Bartosz Bielenia for ages to come. The way he fuses a sense of quiet menace with palpable sorrow is truly impeccable. Within Bielenia's acting, as well as the various supporting performances, the intended intricacy of both the character of Daniel and the entirety of Corpus Christi is beautifully realized.

Posted by Douglas Laman (NerdInTheBasement) at 10:57 AM