13 Days of First-Time Frights: The Crazies 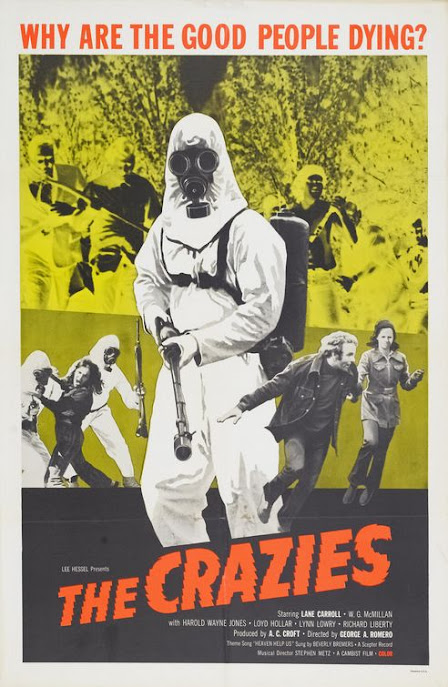 13 Days of First-Time Frights is a series of reviews where Douglas Laman, in the spirit of Halloween, watches and writes about thirteen horror first-time watches These reviews will be posted each Tuesday and Thursday, as well as the three Wednesdays and a Friday, throughout October 2020.
Entry #22: The Crazies

It's not exactly going to be a mind-blowing sentiment to observe modern-day parallels in The Crazies. This George A. Romero movie from 1973 is about a small American town that goes to pot after the governments' response to their water supply being tainted by a bioweapon. Watching it in 2020, one can't help but evoke the modern-day world and the COVID-19 pandemic that has consumed it. In particular, the very same government ineptitude that Romero was satirizing with The Crazies is still around today casting a blind eye to the very existence of this virus in America. It may not be an original observation but it is one that reflects how well Romero used a horror movie to reflect reality. Nearly fifty years later, The Crazies is a piece of satire that feels timely rather than dated.

The specifics of the plot for The Crazies see the townsfolk of Evans City, Pennsylvania being infected by a mysterious disease that causes them to act irrationally and violently. The primary focus remains on David (Will McMillian) and Judy (Lane Carroll) as they, along with a select few others, travel across the town hoping for some sort of escape. Meanwhile, Dr. Watts (Richard France) is called in to help develop a cure for this disease. While there, Watts informs Colonel Peckem (Lloyd Hollar) and the audience that what's actually going on here is that the water supply of Evans City has been tainted by a bioweapon. Now, time is running out for Evans City as the disease spreads and even more vicious behavior is enacted by government officials in hazmat suits looking to contain this contagion.

Like all of Romero's early productions, The Crazies has its amateurish qualities. In this case, sound effects and vocal work tend to sound a bit off while the camerawork sometimes is too grimy for its own good. However, those cracks in the seams don't distract from the far more plentiful good qualities found in The Crazies, which demonstrates that quality writing and an evocative tone can overcome any budget limitations. In particular, Romero effectively handles executing the film's version of the age-old horror movie quandary "Whose the real monster?" While the infected townspeople would seem to be the easy answer to that, it quickly becomes apparent that the faceless government officials in hazmat suits are the ones providing more problems than answers.

Intriguingly, the faceless quality of the real antagonists in The Crazies even extends to the President of the United States, whose only seen from the back and openly endorses nuking a small town. The infected townspeople are acting like monsters because they have no choice. Their minds have been tainted by polluted drinking water. What's the excuse of the scientists, the clean-up crew and the POTUS? Their barbaric behavior is simply a byproduct of who they are. Much like with Night of the Living Dead, Romero commits to pondering the hostile tendencies of man all the way through the credits. There's no cop-out feel-good ending in The Crazies, only a scene depicting corrupt authority tossing aside their one hope of finding a cure.

Aiding the haunting grimness is the nature of the disease itself, which leaves no physical characteristics for either the characters or the audience to use to discern whose infected and whose not. In a typical zombie movie, you can figure out pretty quick whose undead and whose not by peeling skin or dangling jaws. But in The Crazies, it's a crapshoot. All your neighbors can look totally fine yet carry a newfound urge to set everything on fire. This quality is most hauntingly captured in a climactic shootout between David and other people he perceives to be infected. Turns out, though, they're just a couple of High School kids also looking for any kind of help.

One of these kids even calls out David by his last name, revealing that this was a student that David used to work with. Just a week ago, David saw this kid as a student, now, he almost shot this child without hesitation. It's a grim encapsulation of just how much uncertainty is always hovering around The Crazies. In this film, you can never tell who your enemy is while the people sent to protect you are just concerned with maintaining a good PR image. It's chaos all the way down. That makes The Crazies a harrowing experience for its characters, but another grim tour de force from George A. Romero for the viewer.