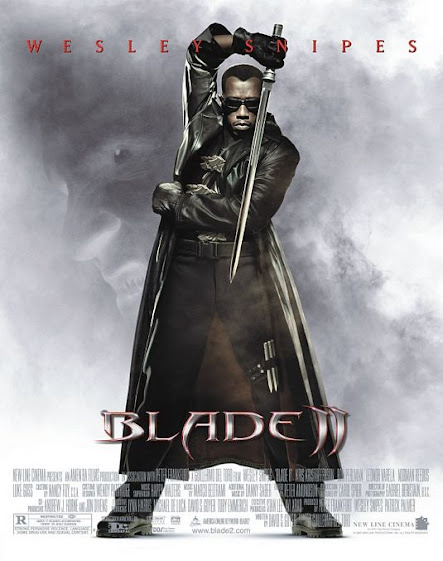 13 Days of First-Time Frights is a series of reviews where Douglas Laman, in the spirit of Halloween, watches and writes about thirteen horror first-time watches. These reviews will be posted each Tuesday and Thursday, as well as three Wednesdays and one Friday, throughout October 2020.
Entry #15: Blade II
Much like the Backstreet Boys or the McRib, Blade (Wesley Snipes) is back! That vampire-hunter is still slicing up undead baddies and has recently used his skills to retrieve his mentor Abraham (Kris Kristofferson). If you're thinking "Didn't Abraham die in the first movie?", the answer would be yes. He died pretty explicitly. We even get to revisit his death scene at the start of Blade II! But much like Men in Black II and Kingsman: The Golden Circle, Blade II just can't let go of a deceased mentor figure, so Abraham is back. Anywho, Blade won't be just teaming up with mentors back from the dead. He's also aligning himself with an elite mercenary group of vampires previously trained to hunt down Blade!

Why would Blade do such a thing? Well, the powerful vampire Eli Damaskinos (Thomas Kretschmann) recruits Blade because he's the only one Damaskinos can imagine being able to face of and defeat Jared (Luke Goss), a new super-powerful form of vampires who could destroy normal vampires and humanity within months. So goes the story of Blade II, which goes about in the expected directions you'd expect. The most prominent female member of the mercenary group ends up being a requisite love interest for Blade. Easily predictable secret bad guys are hiding in plain sight. Oh, and Wesley Snipes still looks cool as heck slicing down foes while wearing dark shades.

All of this means that Blade II might be the most un-Guillermo del Toro movie Guillermo del Toro has ever directed (though I haven't seen Mimic). Making a sequel to a movie he had no involvement in, del Toro is strictly adhering to the trail set up by Blade II's predecessor. That's not a bad thing considering that Blade itself was a good movie, but it did make me yearn for more of del Toro's trademark weirdness. Only Damaskinos lair feels like the kind of gloriously theatrical set you'd find in a del Toro feature. Meanwhile, del Toro's trademark theme of humanizing the monstrous seems to be around when it's revealed Jared is a more complex figure than we originally assumed...but he still becomes just another monster for Blade to defeat. Oh well.

If this all sounds like I'm down on Blade II, I'm really not. It's still a perfectly acceptable action movie. But having seen Hellboy II: The Golden Army and Pacific Rim, I know that del Toro can weave real magic and real weirdness out of American blockbuster fare. Blade II can't help but pale in comparison. Like I said, though, Blade II still works fine on its own merits, particularly in any of the over-the-top action scenes where Blade gets to do exactly what anybody watching this thing wants him to do. Blade has a confident air that couldn't be shaken by the mightiest earthquake. Watching him mow down armies of vampires with his sword is a sight that, shockingly, never gets old.

Plus, whenever Del Toro's fingerprints do emerge, they provide some of the enjoyable jolts of life Blade II has to offer. In particular, the gorier death and body transformation sequences mean the horror in Blade II is a lot more akin to del Toro's Cronos than the scares seen in the original Blade. Plus, Ron Perlman, del Toro's good luck charm, shows up as the most prominently-seen of the vampire mercenaries. Del Toro and Perlman are always a good combo but Perlman's rough-and-tumble onscreen demeanor also just makes for a great flipside to Snipes' Blade persona. These two have such pronounced differences just in how they carry themselves, let alone in the fact that Perlamn's character has been trained to slaughter Blade.

Action sequences involving the vampire hunter make heavy use of slow-motion (ah, the 2000s, a post-Matrix world where slo-mo was everywhere), and CGI stunt doubles. Those two elements kept taking me out of the movie but the more outlandish stunts were able to reel me back in. Blade II is the weakest title in Guillermo del Toro's filmography and it might even be a slight step down from its predecessor. Still, it's Wesley Snipes killing vampires under the direction of the man who gave the world Pan's Labyrinth. Needless to say, that combo can't help but yield some entertaining results.