13 Days of First-Time Frights: Let Me In 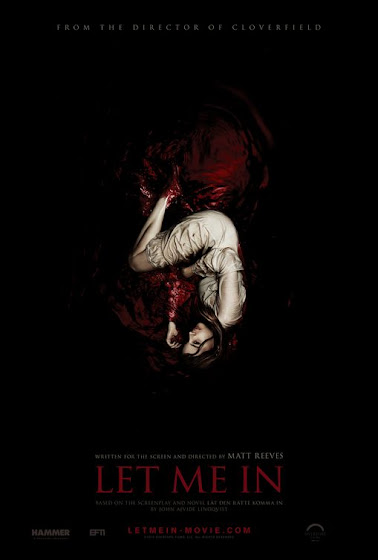 American remakes of foreign-langauge films frequently feel like a pointless exercise. Yes, good examples of this genre exist, most notably in Martin Scorsese's The Departed or The Birdcage. But for the most part, the likes of The Secret In Their Eyes or Godzilla (1998) just miss the whole point of the original property without carving their own identity as an acceptable substitute. Add to the pile of good examples of this trend Matt Reeves' Let Me In. A remake of the 2008 Swedish film Let the Right One In, itself an adaptation of a book of the same name by John Ajvide Lindqvist, Let Me In isn't just rehash leftovers. It's just a good chilling vampire yarn in its own right!

Owen (Kodi Smit-McPhee) is having a troubled time at school. Living in Los Alamos, New Mexico with his newly-single Mom, Owen is constantly harassed by bullies. Feeling all alone, Owen soon finds a friend in new neighbor Abby (Chloe Grace Moretz). Though Abby insists the two keep their distance at first, they eventually bond over, among other things, Rubik's Cubes, arcade games and the shared sense of being lonely in a town full of people. But there's a wrinkle. You see, Abby is a vampire. Not just a harmless kind of vampire either. She needs blood to live and her "father", Thomas (Richard Jenkins), has been slaughtering local townsfolk for her. Owen finally has a friend...and she's also a monster.

Tomas Alfredson's approach to Let the Right One In was one deeply rooted in European arthouse sensibilities with ts prolonged single-takes and muted atmosphere. There was a clinical approach to the movie that was as cold as the snowy ground the adolescent leads walked on. In the hands of Alfredson, that sense of detachment actually worked quite well at reflecting how the protagonists felt so isolated from the world around them. For Let Me In, writer/director Reeves smartly opts to go in the opposite tonal direction. Let Me In is a movie with lush emotional moments that can be popped, like a pin puncturing a balloon, by the grisliness of Abby's condition.

For much of Let Me In, the film could easily function as just a coming-of-age drama rather than a straightforward horror movie. Abby and Owen bonding in an arcade or the duo dancing to music in Owen's apartment while his Mom is out, these scenes perfectly capture that sensation of awkwardly navigating your first crush. Lead performers Kodi Smit-McPhee and Chloe Grace Moretz impressively reflect the unique authentic imperfections of their individual characters. Across both performances, though, is the poignant idea that these two truly feel at home in each other's company. In their time together, two loners don't have to be so lonely.

Just when you're lulled into thinking the whole movie is just centered on adolescent sweetness, Reeves pulls the rug out from under the viewer. This whole thing, after all, is centered on a carnivorous vampire. Reeves commits just as heavily to the gruesome horror sections of Let Me In as he does to the coming-of-age portions. Any of the scenes of Thomas going out to capture people for Abby are especially chilling mostly due to Reeves' sense of restraint. These largely dialogue-free scenes get so much tension out of just Thomas waiting in the backseat of these cars rather than slicing people's throats open. Meanwhile, the choice to frame some of his actual killings from afar only heightens their impact. Again, in these moments, we see how Let Me In uses prudence to its advantage.

Come to think of it, a number of the best scary moments in Let Me In are built on the same thing that fuels the sequences dedicated to Thomas going out and murder people; a sense of growing dread. Abby's feigning an injury to lure a jogger or a cop breaking into Abby's home all get so much suspense out of the viewer knowing more than the characters on-screen. These suspenseful set pieces are a great use of Alfred Hitchcock's "Bomb Theory" but they're also exceptional in how well they play on the audiences' investment in Owen and Abby. No matter how much carnage is occurring on-screen, the relationship between Owen and Abby never gets lost in the shuffle. Scares work in the service of characters in Let Me In, not the other way around.

On top of all that, the movie looks great too. The camerawork is certainly not as distinctive as the bold cinematography of Let the Right One In. But Reeves still delivers plenty of memorable imagery here, particularly in an extended single-take following Thomas trying to hurriedly leave the scene of a botched kidnapping. I'm sure in 2010, when found-footage horror movies with oodles of shaky-cam dominated movie theaters, seeing this kind of crisp camerawork on the big screen was extra exciting.

I'll freely admit that, going into any American remake of a foreign-language film, I carry a good amount of trepidation. But leave it to the filmmaker who turned a pair of Planet of the Apes blockbusters into incredibly evocative pieces of cinema to also make a Let the Right One In remake that can stand tall alongside the original. Let Me In is no cash-grab horror remake. Instead, it's a thoughtfully rendered feature that carves out a bloody involving coming-of-age yarn.