The Core Is a Disaster Movie, Just Not In The Way It Intended 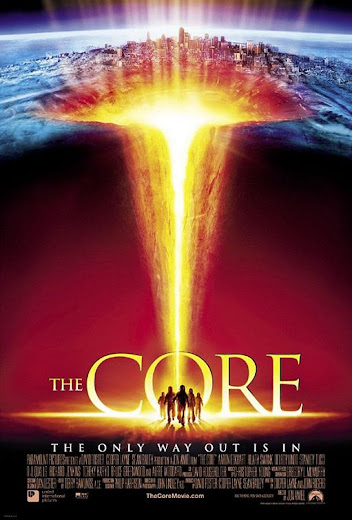 Some genres are hard to parody. Self-serious films are the best kind to lampoon. The humorless disaster movies of the early 1970s made for perfect fodder for Airplane! to skewer while the serious nature of conventional Westerns made that genre ripe for rib-poking when Blazing Saddles came along. The Core isn't really a parody per see but it's also a tongue-in-cheek exercise playing on the hallmarks of 1990's disaster movie blockbusters like Armageddon. The Core is cognizant of the tropes and it wants to simultaneously poke a little fun in them while primarily functioning as a straightforward entry into this subgenre. After all, Armageddon made a ton of money. The dialogue may be bad but they must be doing something right, right?

This is a difficult genre to parody or even just do tongue-in-cheek variations on because of how inherently preposterous it already is. What can any zany comedy do that's more ridiculous than the Erotic Animal Crackers scene in Armageddon? Something like Mars Attacks! found a great solution to this by applying a layer of dark comedy to a traditional disaster movie. These films don't tend to use that type of humor, which gives Mars Attacks! some novelty. The Core, meanwhile, struggles in its attempts to both emulate and satirize the genre. This makes for a messy as hell movie but also an entertainingly bad one, the kind that the Satelite of Love crew were invented for.

The Core begins with a series of heart attacks and then a bunch of pigeons attacking people. What does it all mean? Well, the core of the Earth has stopped. This is going to lead to the total destruction of the Earth within a year. There's nothing we can do to stop the inevitable...but to quote Dr. Conrad Zimsky, "What if we could?" Turns out, Dr. Edward Brazzelton (Delroy Lindo) has created a transportation device, a laser and a sturdy material that can make it possible to travel to the Earth's core. Now, Dr. Josh Keyes (Aaron Eckhart) and Major Rebecca Childs (Hillary Swank) are leading an expedition team into the middle of the Earth. Time is running out and humanity's fate is hanging in the balance.

There are too many baffling visual decisions in The Core to count. Whether this movie was intended as a satire or not, there's really no excusing these confounding choices. The idea to have everything seen out the front windows of the crew's vehicle be filtered through pink lends an unwelcome dissonance to the interior and exterior shots set inside the Earth. Anytime we cut outside the spaceship, it's like a wholly different PC game is being played, one that lacks the pink hue seen inside the ship. The death scene of a crew member who mostly just looks like he's in a cramped storage unit inspires giggles rather than poignancy.

And then there's the dialogue, which actually does succeed in being a humorously stylized reflection of typical disaster movie dialogue. For example, characters solemnly intoning the name of hacker Rat (DJ Qualls) had me laughing way harder than I'd like to admit. Meanwhile, everybody in The Core is just trying to one-up each other with their one-liners. There are no conversations in The Core, just characters engaging in failed attempts at creating the dialogue equivalent to a mic drop. And then there are the solemn monologues. My favorite of these is Bruce Greenwood's character telling Childs she has to suck before she can be a real leader. The phrasing is just so clumsy yet Greenwood's delivery is trying so hard to instill a stoic quality into them. It's such a futile effort.

If there's a feature of The Core that keeps it back from being all-time fun trash, well, beyond the overlong runtime, it's Aaron Eckhart. He's woefully miscast in this part. He can't sell Keyes as an everyman dork in the early scenes of The Core and whenever he has to engage in pronounced emotions, it comes across as hollow even by the standards of this movie. The Core really needed an engaging leading man, someone along the lines of Bruce Campbell, who knows how to lend a wry balance of humor and self-seriousness to B-movie fare. Eckhart's just not up to the task. His performance and plenty of other things in The Core go oh so wrong. It's a blockbuster movie that's constantly bad but whose terribleness alternates between being trashy fun and just trash.