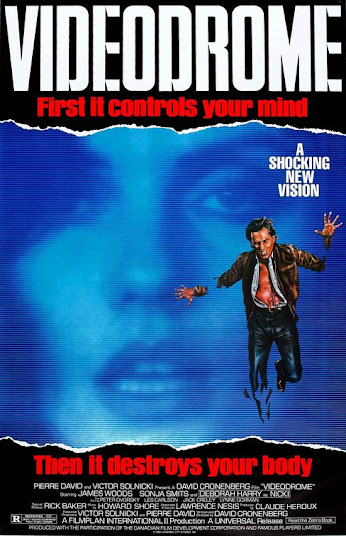 13 Days of First-Time Frights is a series of reviews where Douglas Laman, in the spirit of Halloween, watches and writes about thirteen horror first-time watches These reviews will be posted each Tuesday and Thursday, as well as the three Wednesdays and a Friday, throughout October 2020.
Entry #26: Videodrome

Who better to close out this year's edition of 13 Days of First-Time Frights than David Cronenberg?

Cronenberg has left an undeniable stamp on the world of horror cinema. In particular, he's proven to be the architect of the body horror subgenre. In 2020, if you're doing any kind of pop culture that involves the horrors of the human body, whether you're an indie movie or Rick & Morty, Cronenberg's name is bound to come up. Cronenberg's contributions to this subgenre were solidified in his earliest directorial efforts like Scanners or the subject of this review, Videodrome.  With these projects, the tell-tale signs of Cronenberg were on full display and the world of horror would never be the same.

Videodrome's protagonist is Max Renn (James Woods), who works the terrifying job of being a slimy TV executive. He oversee's CIVIC-TV, a public broadcast station in Toronto, Canada, In order to grab any eyeballs whatsoever, CIVIC-TV plays programming with a fixation on sex and violence. It's not a pretty business but it is his. An obscure program called Videodrome is brought to Renn's attention and he immediately wants it. Videodrome consists of women being tortured by big burly men in an empty yellow room. It's perfect CIVIC-TV content! But going on the hunt for this footage leads Renn to discover that watching Videodrome instills hallucinations into the viewer. Now Renn must figure out if his grasp on reality is slipping away or if he's stumbled onto a new conspiracy...

Videodrome is one of those movies you just have to roll with. What starts out as a commentary on public television and lewd on-air programming quickly becomes...something else. In the final half-hour of Videodrome, I had to chuckle to myself as I realized that Videodrome's central metaphor seemed ot have vanished. The thing is, I don't think that's an accident on the part of screenwriter David Cronenberg. He establishes a world of rules for the character for Renn and a seemingly concrete thematic throughline for the audience to follow. As Renn becomes more and more immersed in the surreal visions of Videodrome, both of those things vanish.

It's an explicit way of telling the viewer that nothing can be trusted in this movie. Any potential social commentary will be sacrificed at the altar of gooey otherworldly visions. And when I say gooey, boy do I mean. Not just in regards to blood either. Renn's own hand, whilst it's a clutching a gun, is transformed into some kind of sticky gooey substance from another world. The HD transfer of Videodrome makes the gloopy texture of this and other substances to tangible. You wanna recoil back, yet your eyes are captivated by the sheer strangeness of the entity. Rick Baker's magnificent makeup effects have created the visual effect equiavelent of a traincrash, something horrendous you must stare at.

Of course, the makeup and visual effects are anything but a traincrash. They're still remarkable decades after Videodrome's release. The wizardry used to realize the opening of Renn's stomach is especially an impressive feat. It totally looks seamless and believable while still carrying an appropriate dream-like quality to it. The VFX in Videodrome constantly challenge you to imagine what could be real and what could be a nightmare, placing us squarely in the mind of Renn. Cronenberg's bravura direction further enhances this quality. He never holds back in filming the gross-out mayhem that's unleashed once Renn watches that fateful video tape. His camera never blinks and he encourages the audience to do the same.

Future Cronenberg efforts like The Fly and A History of Violence might be a touch more cohesive than Videodrome, but then again, Videodrome is going for anything but cohesive. This movies main aesthetic is that of a nightmare gone on the warpath. Since when do nightmares adhere to traditional story structures? Videodrome is all about upending what the viewer expects in the name of the gruesome and slimy. The result of those ambitions is something I couldn't turn away from. Cronenberg's imagination is so vivid, from his obsession with body horror to his own sexual proclivities peeking out of the margins. As seen with Videodrome, his warped creativity makes for totally idiosyncratic horror cinema.

Posted by Douglas Laman (NerdInTheBasement) at 9:32 AM