Austin Film Festival: Paper Tiger Is Too Obvious For Its Own Good 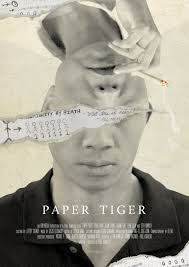 Do you ever watch a movie and get frustrated by it? Not angry, not disappointed, just frustrated. It's like watching a student you know can deliver an A paper settle for just turning in a C paper. Paper Tiger was like that for me. There's an intriguing psychological thriller in here. The potential is there. Certain scenes are good enough to demonstrate that we could have had something special here. Unfortunately, Paper Tiger doesn't quite go the distance like it should. Too often, writer/director Paul Kowalski settles for going the obvious route in its storytelling. It tosses ambiguity into the wind in favor of a more generic exploration of its grim story.

Paper Tiger is about Lily (Lydia Look) and her son Edward (Alan Trong). It's been a tough year for both of them. Lily's husband and Edward's dad recently passed away. At the same time, Edward is struggling to fit into his high school during his senior year. With all this going on, Edward has begun to immerse himself in virtual-reality video games and has begun having psychological episodes at home and at school. With her son lashing out and talking about how much he considers his classmates "zero's", Lily begins to worry. What has her son become? A thought soon begins to creep into Lily's mind that Edward could be gearing up to become a school shooter.

It's easy to see a really compelling version of Paper Tiger. It's one told from Lily's perspective. Edward is kept at a distance from the viewer so that a real sense of ambiguity can be imbued into his actions. Unfortunately, Paper Tiger decides to get up-close-and-personal with both of these characters. Among the many problems with this approach is that subtlety is totally eschewed. Edward doesn't just resemble a traditional version of a school shooter, he practically bellows about it. Additionally, Paper Tigers makes the gross choice of suggesting violent video games are a key contributor to endorsing violent behavior. Is society really still acting like violent games or rock songs are the crux of mass shootings instead of white supremacy?

Even more uncomfortable is how Paper Tigers then coats all of Edward's actions as explicitly evil. Rather than leaving it up to the audience to decide if Lily is misinterpreting her son's behavior or not, moments of Edward just talking to himself or doodling in a journal are played with the same kind of music and cinematography one would use to depict Jason from Friday the 13th butchering someone. It's a strange choice on its own, but it's especially weird to go this route with behavior that can't help but evoke traits largely associated with autism (Edward is not explicitly diagnosed as autistic, for the record). As someone with autism, it's disheartening to see movies in 2020 still coding behavior associated with autistic as "evil".

That troubling stereotype reaffirms how Paper Tiger also goes down incredibly tired routes to generate tension. It's also an extension of how the whole movie tends to not just woke but jab your ribs when it comes to declaring what's ominous. Characters exchange dialogue that awkwardly lays out their frustrations while the direction never leaves room for imagination on what we're supposed to be unnerved by. Paper Tiger doesn't trust its audience enough and all that hand-holding upends its attempts at being a grim thriller.

On the other hand, the production fares much better wringing tension out of scenes hinged on differing approaches to Western medicine. Lily, Edward and Lily's sister Mei (Elaine Kao) have come from China. Mei keeps suggesting that Lily try more traditional Eastern approaches to treating Edward while it's mentioned that Edward's father died because he refused Western medical practices. There's a lot of interesting and very specifically-detailed conflict here that proves to be the most interesting part of Paper Tiger.

Here is the moral complexity that the rest of the movie so desperately lacks. You can so easily see both perspectives of Edward and Lily when they have an argument over this. Lily just wants her son to be better while Edward refuses to trust taking pills after the loss of his father. Here, Paper Tiger creates tension out of material that grounded within these specific characters, not tired stereotypes about "autism=creepy" or video games being inherently the root of violence. Similarly successful is the films final twenty minutes, which certainly deserve props for going all the way with the inherent bleakness of this story, which is apparently based on real events. Nobody can say Kowalski chickened out with a tidy happy ending here on Paper Tiger.

It's a pity Paper Tiger often indulges in over-the-top demonstrations of Edward's anger or motivations because Kowalski's visual sensibilities actually flourish in quiet demonstrations of anguish. Especially powerful is shot that opens the movie concerning Lily sitting in her trashed living room. At this point, this character is or how her living room got like this. But this image exudes so much woe that we're compelled to keep watching and find out how we got here. Unfortunately, what follows in Paper Tiger tends to undercut its best qualities by leaning on tired stereotypes and storytelling that's too overt for its own good. Like I said, the whole exercise proves so frustrating.

Posted by Douglas Laman (NerdInTheBasement) at 9:41 AM