13 Days of First-Time Frights: The Orphanage 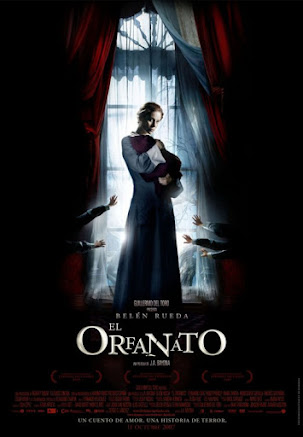 13 Days of First-Time Frights is a series of reviews where Douglas Laman, in the spirit of Halloween, watches and writes about thirteen horror first-time watches These reviews will be posted each Tuesday and Thursday, as well as the three Wednesdays and a Friday, throughout October 2020.
Entry #21: The Orphanage
NOTE: SPOILERS AHEAD!

J.A. Bayona loves his broken families. In The Impossible, a tsunami wave threatens to tear a family apart. In A Monster Calls, the impending death of his mother leads to a boy lashing out. And in Jurassic World: Fallen Kingdom, family audiences were devastated by the films tedium. This trait goes right back to the very beginning of his feature film directorial career with The Orphanage. Released in 2007, Bayona's inaugural feature film also established other critical parts of his repertoire, such as an affinity for gothic locations and emotionally brutal sequences.
Laura (Belén Rueda) grew up as a child in an orphanage that she's now moved back into as an adult with her husband and their adopted son, Simón (Roger Príncep). As they move into their new domicile, Simón''s longtime fixation with imaginary friends gets taken to a new level as he befriends a bunch of imaginary kids that he swears are real. Laura dismisses it as childhood silliness until Simón goes missing shortly after discovering an elderly woman wandering around her property. Now, Lauren is realizing that there's something much more sinister at work from those adolescent imaginary friends. If she wants to see her son again, Laura will have to find out what happened in this orphanage and why the dead refuse to be at peace.
Props to The Orphanage alone for working so well as a campfire story that keeps you on your toes. There's an elegant simplicity to the movie that eschews the usual storytelling detours for these kind of movies, like absolutely nobody believing the protagonist when she starts talking about ghosts. Her husband is dubious, but our lead character is able to find some paranormal hunters in short order. In going this route, The Orphanage is able to spend less time spinning its wheel in a predictable manner and more time on exploring the psyche of Laura The sheer terror Laura feels over losing her son registers so vividly because The Orphanage makes sure there isn't anything to distract from her emotions.

These feelings effectively inform the various suspenseful set pieces of The Orphanage. An extended sequence where the medium Laura has hired has a haunting encounter with the children ghosts proves especially unnerving. Choosing to capture this interaction through security camera footage partially obscures what's happening to her and that's exceedingly frightening. The mind reels with what kind of horrors she's experiencing in that room. Meanwhile, the fact that an expert of the paranormal is being so overwhelmed by these spirits makes one petrified over how Laura could possibly stand up against these ghosts.

Of course, by the end, The Orphanage pulls back the curtain to reveal that it's not really a straightforward spooky ghost tale. While the movie has been playing the ghost children as scary entities for so much of its runtime, the final scene of The Orphanage renders these deceased adolescents as tragic figures. Even the Tomas, who is adorned in an unnerving mask, turns out to be a victim of a prank gone awry rather than a slasher film villain. It's a bold move, one that gives The Orphanage the rare tearjerker ending in horror movies. Many of these films end on a note meant to unnerve the soul. The Orphanage, meanwhile, concludes on a brutally melancholy note.

The execution of this plot turn isn't quite flawless. Most notably, an early scene of Tomas attacking Laura and locking her in her bathroom feels out of place. It works for making the audience think Tomas will be a traditional slasher movie villain, sure. But such brutal actions don't fit in with the actual characterization of Tomas and the other kids. That particular scene feels like a ham-fisted red herring rather than an organic set-up in disguise. Still, the big about-face in Orphanage's final minutes mostly works quite well and wraps this tale up on a memorably creative note. It's interesting to see fragments of Bayona's work in The Orphanage but the film proves plenty intriguing on its own entriely divorced from Bayona's filmography.