13 Days of First-Time Frights: An American Werewolf in London 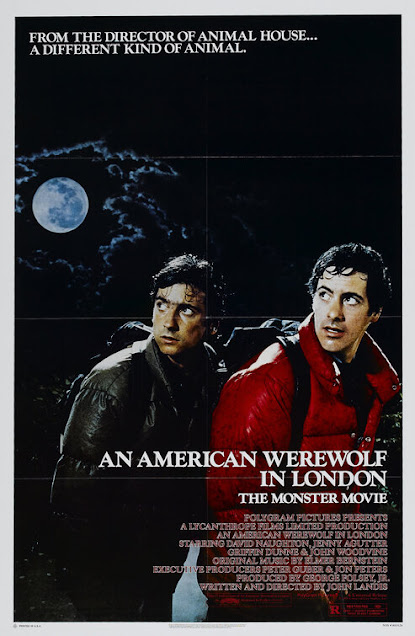 Entry #16: An American Werewolf in London

It's strange that horror comedies have always been such a tough sell when it comes to marketing movies considering how naturally the two genres have gone together. Dating back to the earliest days of Universal Monsters, which peppered their horror films with moments of levity, horror cinema has always made use of comedy. That relationship only grew more profound when filmmakers like Sam Raimi began making movies. Raimi's Evil Dead movies are a quintessential example of groundbreaking ways to combine the worlds of scares and yuks. Coming out in relatively the same era is another notable horror/comedy, An American Werewolf in London.

Werewolf begins not with the titular beast but just two dudes backpacking together. Best buddies David Kessler (David Naughton) and Jack Goodman (Griffin Dune) are walking across the European landscape when they come across a strange pub. After this encounter, they wander further off and are attacked by some kind of hairy beast. Jack is killed in the encounter but David manages to survive. Afterward, David is visited by Jack's ghost and is informed that he's no longer himself. When the next full moon comes, David will turn into the beast that attacked him and Jack: a werewolf. David is dubious of this revelation until he actually transforms into this beast. Now, a bloodthirsty beast is loose in London and Davis is gonna have to make some hard choices if he wants to stop this monster.

You come to Gene Kelly musicals for the song n' dance routines. You come to Charlie Chaplin movies to laugh. And if you're seeking out An American Werewolf in London, you're coming for Rick Baker's makeup work. Baker does not disappoint in his practical effects work used to render the transformation of David Kessler. In 2020, an extended sequence dedicated to David gradually turning into this beast still thoroughly impresses. All the CGI shortcuts that would be used in a modern take on this story (or in that  1997 quasi-sequel An American Werewolf in Paris) are absent. What we have instead is the vastly preferable alternative of Baker's makeup work that lends a tangible quality to the extraordinary.

Equally impressive is the makeup work used to render Jack's deteriorating state as the film goes on. He initially appears to David as just Jack but with nasty scars on the side of his face. By the end of An American Werewolf in London, Jack has become a green-coated skeleton that barely resembles the backpacker David once knew. Both Baker's makeup work and the other visual effects wizardry used to realize this gradual transformation is truly impressive, particularly in how they're able to convey Jack's original personality even in his most far-gone state. That's an excellent detail that demonstrates how An American Werewolf in London never forgets a sense of humanity in its VFX work.

As for the scares in An American Werewolf in London, my favorites are the ones in sequences of David hunting down people across London for the very first time. To conceal the understandable VFX limitations in realizing a werewolf, we don't see David's werewolf all the time. We mostly see his point-of-view, particularly as he hunts down a guy stuck in the subway late at night. Much like with Jaws, a filmmaking choice meant to cover up VFX restrictions just makes things scarier. A more chaotic climax with the werewolf just mutilating people out in the open isn't really that scary since everything is so apparent. Coming hot off the effectively restrained sequences from earlier, this finale can't help but come up short despite throwing everything at the wall.