The Great Escape Is The Best Kind of Rousing Entertainment 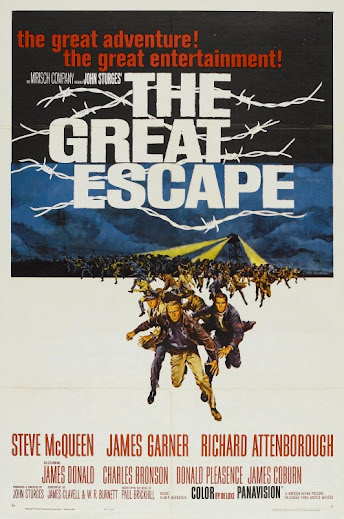 When The Great Escape finished, I felt electric. I wanted to clap my hands together, squeal with glee an even watch the whole darn production over again. I love movies so very much and nothing, and I mean nothing, makes my soul feel happier than watching something truly extraordinary. Crackling entertainment as good as The Great Escape is hard to come by. It's hard to remember that when something like The Great Escape makes this kind of filmmaking look so effortless. But if everyone could make movies this good, well, they would.

The Great Escape concerns a collection of Allied soldiers imprisoned in a German prisoner-of-war camp during World War II. Some of the people assembled here are Captain Virgil Hilts (Steve McQueen), Robert Hendley (James Garner), Roger Bartlett (Richard Attenborough) and Colin Blythe (Donald Pleasence), among many others. From the moment they arrive here, these men begin to assemble an escape plan. They've each got unique strengths that can help them dig their way out from under the noses of their Nazi captors. But no escape comes easy and The Great Escape follows our heroes as they encounter every struggle imaginable in a quest for freedom.

The Great Escape has had an enormous impact on pop culture, particularly on a classic episode of The Simpsons and on basically everything in Chicken Run. This means I was already familiar with certain elements of the production, such as the sight of Virgil Hilts tossing a baseball against the wall of his isolated cell and even the sound of Elmer Bernstein's score. But The Great Escape cannot be boiled down to a handful of pop culture references. There were plenty of great and totally unexpected details awaiting me in my inaugural viewing of this feature from director John Sturges'. Perhaps most notably, and most pleasantly, I was delighted to see that The Great Escape is a movie all about camaraderie.

Some movies with all-male casts can get lost up their own head drowning in macho brawn and testosterone, with none of the individual members even realizing that there are other members of the cast. That's nowhere near a problem for The Great Escape. Over the 172-minute runtime, James Clavell & W. R. Burnett has the individual members of the ensemble cast really connect with each other. We see these people forming bonds that prove totally interesting on their own merits as just human drama. The saga of Colin Blythe is a perfect example of this. This endearing bird-watcher already captures your heart in his introductory scenes. However, he becomes extra compelling once the tragedy of his newly-realized lack of vision comes into play. A scene of Blythe trying to play down his condition in front of his fellow escapees is guaranteed to crush your heart.

Better yet, these fleshed-out characters make the suspense scenes related to the inevitable escape sequences totally riveting. We know what everyone's got on the line. We know what individual defects they have that could jeopardize everything. We know these people, inside and out, and I was on the edge of my seat watching them try to get out. A set piece where everyone tries to slowly make it out of a hole without being noticed by the guards is further aided by the direction from Sturges and editing from Ferris Webster. These two know how to frame and time this sequence for maximum thrills. Each new cut had me petrified that this would be the shot where Hilts and company get made out.

The intimate nature of the early character-building scenes is nicely maintained for post-escape sequences in The Great Escape. The prisoners that did manage to get out are tracked down one-by-one by various Nazi officers. Rather than dealing with this in a compressed montage, we get to follow everybody in their own separate storylines. This gives both the characters and the intense tone (two of the very best qualities of The Great Escape) plenty of room to breathe. Excellent job executing (no pun intended) the deaths of certain inmates here too. There's just enough restrain in how we see (or don't see) these demises that makes the passing of these characters all the more powerful. It's just one of countless thoughtful touches scattered throughout The Great Escape, whose top-to-bottom excellent instilled me with such lively vigor that I'm still reeling from it!!

Posted by Douglas Laman (NerdInTheBasement) at 11:39 AM