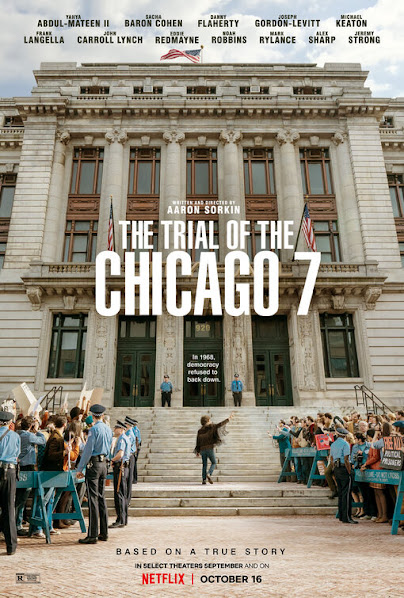 Let's go back to the Democratic National Convention in Chicago 1970. This is where it all went down. This is where the events of The Trial of the Chicago 7 kicked off. A storm of anti-Vietnam War protestors belonging to different groups, like Abbie Hoffman (Sacha Baron Cohen) and Tom Hayden (Eddie Redmayne), had descended on a Chicago park. Shortly thereafter, the local police decided to respond to their presence through violence. Afterward, eight of these individuals, including Hoffman, Hayden, Jerry Rubin (Jeremy Strong), and Bobby Seale (Yahya Abdul-Mateen II), were arrested for conspiracy to cross state lines to incite violence.  A trial proceeded to take place where the eight defendants all tried to get their voices heard in the face of a court more interested in using them to deter further activism than any actual due process.

With The Trial of the Chicago 7, writer/director Aaron Sorkin is squarely situated in the courtroom drama mold that he's worked with so often in film and on Broadway. His expertise in this genre means that Sorkin can play the most cathartic moments in Chicago 7 like a fiddle. Just look at a scene where Michael Keaton's Ramsey Clark reveals the real reason that he allowed two government officials to overhear his conversation with Hoffman's lawyers. It works so well because of how Sorkin knows just when to time the revelation for maximum "Aw yeah!" cheers. There's a number of other moments like that in Chicago 7 that may be cornball but are nonetheless pleasing.

Certain parts of The Trial of the Chicago 7 don't really feel like a Sorkin movie. For one thing, not once did anyone do a Walk & Talk sequence. That's probably because Chicago 7 doesn't focus on any one character long enough for us to follow them down a hallway delivering a monologue. The feature has such an expansive focus that Sorkin is frequently cutting across different characters at different points in time. This tactic proves most interesting in scenes dedicated to police officers being interrogated about what really happened that fateful day in Chicago. Their testimony about unruly protestors is played against flashbacks (and even actual archival footage) showing police brutally harming protestors.

Unfortunately, the worst uses of this cross-cutting tactic tend to muddle characters rather than flesh them out. Sorkin's so busy hopping from one point in time to the next that the personalities of on-screen characters get lost in the process. I kept wishing The Trial of the Chicago 7 would allow me to get to know these characters out of the courtroom, off the stand-up stage, and outside of a rally. Characterization also gets lost due to the film's tendency for high-stage theatrics. The story of Bobby Seale, for example, is told here in a manner that eventually reduces him to being just a prop. Said prop's only purpose is to allow white characters (like rival lawyer Richard Schultz) to establish their credibility as not actually racist people in big dramatic line readings.

Such a scene delivers lines of dialogue that are handy for a trailer but don't do much to make Seale a person. This is especially a shame given that Yahya Abdul-Mateen II gives one of the best performances of the whole movie in his screentime. Alas, Abdul-Mateen II can only do so much when his character is undercut by The Trial of the Chicago 7's surprisingly blase attitude towards minorities and women. The revolution is here, but Sorkin's gaze is only focused on the most privileged of activists. In any year, that would feel like an undercutting of Chicago 7's central themes. In 2020, though, amidst rising protests against race-based police brutality, it feels especially insulting.

The ensemble cast of Chicago 7 contains performances that are all over the map. Sacha Baron Cohen delivers great work in the lead role. It was a clever idea to have Cohen play an outsized jokester who's also an activist. It allows Cohen to play upon traits that he's bee utilizing for years as a comic while also allowing him to flex his dramatic acting muscles. On the opposite end of the spectrum is Eddie Redmayne, who struggles mightily to convey any sort of discernible personality in his performance beyond just being a broadly-defined antithesis to Cohen's Hoffman. Reliable character actor staples like Frank Langella, Mark Rylane and John Carroll Lynch do memorable work in supporting roles.

All these actors are working under the guideship of Aaron Sorkin in his second stab at directing feature films. Unfortunately, his visual style hasn't improved much from Molly's Game. Chicago 7 mostly just looks flat while the filmmaking misses a number of opportunities to serve as a visual reflection of its lead characters. Thankfully, Sorkin's underwhelming directorial work doesn't get in the way of the genuinely effective moments in The Trial of the Chicago 7. There's enough of those moments to make Chicago 7 an agreeable watch. However, Sorkin's best screenplays (The Social Network and Steve Jobs specifically) and the boundary-pushing nature of its real-life characters kept making me wish for more. The Trial of the Chicago 7 could have been more than just a familiar take on people who wanted to upend the world.