By Happy Madison Standards, Hubie Halloween Is A Treat 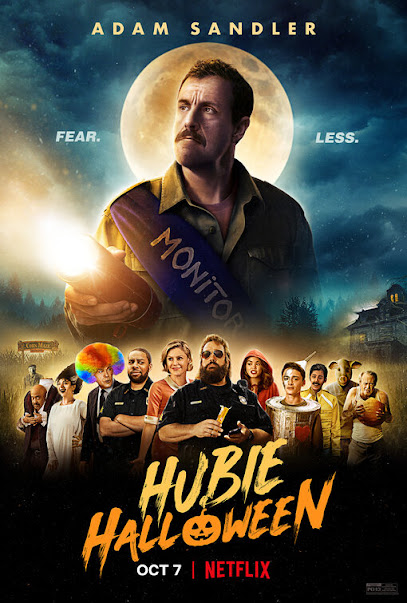 It's that time of year of again. A new Adam Sandler vehicle is upon us. Though they now premiere on Netflix instead of in movie theaters, the formula has largely remained the same. PG-13 humor heavy on slapstick and bathroom humor. Lots of celebrity cameos. Product placement abounds. Oh, and there's also the fact that most of these movies hailing from Sandler's Happy Madison production company haven't been very good. Hubie Halloween carries most of these very same qualities but it's also an improvement over most other Sandler vehicles. As far as general movies go, that makes Hubie just a painless but disposable production. Among Sandler comedies, though, Hubie practically looks like Duck Soup compared to Jack & Jill.

Sandler plays one of two types of characters in his comedies. In films like Grown Ups or Just Go With It, he's an "everyman" without much of a discernible personality. Then there are the characters who are like Saturday Night Live characters he never got to play. They usually have distinct costumes and a wacky voice. Little Nicky, Sandy Wexler, Zohan, those kinds of characters. Hubie Dubois, the lead character of Hubie Halloween, falls distinctly into the second class of character. He probably would have worked fine as a one-off character in a Halloween-themed SNL sketch in the vein of David S. Pumpkins.

As a character we follow for a whole feature-length movie, Hubie's constant muttering and Narc-esque sense of dedication to rule-following gets old.  Something else Hubie has is a penchant for being scared by, well, everything. Even his Mom's goofy Halloween decorations frighten him. But Hubie is gonna need to muster up some courage if he's going to save Halloween night for everyone who lives in his hometown of Salem, Massachusetts. Somebody out there is making people disappear. This town has its own Michael Myers on the loose and Hubie, through a series of plot contrivances, might be the only one who can stop this menace.

The fact that some kind of haunting figure is constantly driving the plot of Hubie Halloween already makes it a stark improvement over Happy Madison comedies.  Whereas the Grown Ups movies felt like a bunch of home videos stitched together, Hubie at least has a cogent character arc and a consistent nemesis to help keep the premise moving. The Halloween setting also make the whole movie a lot more visually pleasing than expected. Anytime there's a crowd scene, you can amuse yourself by picking out fun costumes that the various characters are wearing. It could be the New England side of my family talking, but the various outdoor environments informed by Massachusetts in Autumn prove to be quite nice to look at. Even if a gag falters, you can just turn to the background, see something pretty, and smile.

Also, the humor isn't nearly as irritating as it is in other Sandler vehicles. Farts, for example, are kept to just one gag at the beginning. Even the recurring celebrity cameos are more enjoyable this go-around. Steve Buscemi proves particularly amusing as Hubie's new neighbor who might possibly be a werewolf. It's a weird little role but Buscemi commits to it with such amusing vigor. Really, the weak link here is Hubie. Sandler gets points for tossing himself into the part and the characters trusty thermos provides some amusing sight gags in how, like Mary Poppins' bag, it can produce any object when the occasion the calls for it.

But Hubie just isn't interesting or funny enough to hang a whole movie on. To boot, the eventual romance between him and Violet Valentine (Julie Bowen) is utterly perplexing. Hubie Halloween executes their love with surprising sincerity despite the fact that there's no reason Valentine should be this attracted to Hubie. Why does the film keep returning to their romance instead of engaging in absurdist gags (like Buscemi's character)? Hubie turns out to be the biggest problem with Hubie Halloween and keeps the whole production from really being something special. But as either a family-friendly Halloween-timed diversion or a Happy Madison comedy, you could do certainly far worse than Hubie Halloween.