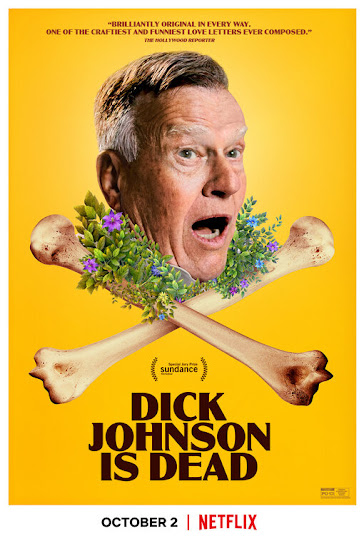 How do we cope with tragedy? Well, one way is through making fun of it. That's why people so often resort to sarcastic quips in the face of turmoil or why so much comedy focuses on ridiculous the power. If we can make fun of something, then it loses some of its imposing nature. How terrifying can a monster be if you can throw a pie into its face? The process of making light of something daunting informs the documentary Dick Johnson is Dead. This project, helmed by Cameraperson director Kirsten Johnson, tackles the scariest tragedy of all: death. Speaking from experience, it's easy to shove that idea to the back of our minds, where it won't consume our thoughts. But death comes for us all. Even for relatives we love.

As Dick Johnson is Dead opens, we meet Dick Johnson. The father of Kirsten Johnson, Dick was born in 1932 and has worked as a therapist. However, he's beginning to show signs of mental deterioration. He's forgetting his keys, he'll forget important dates, and then there was the recent incident where he drove his car through a construction site. Both Dick and Kirsten saw what happened to Dick's wife as Alzheimer's took away the last few years of her life before she passed away. Knowing what's to come, it's time to prepare. It's time for Dick to move into a new apartment in closer proximity to Kirsten Johnson. Simultaneously, Kirsten and Dick craft an ingenious way of taking the sting out of the looming specter of death. The duo, with the help of a film crew, begins to stage filmed versions of the various ways Dick could die.

Falling down the stairs? Getting stabbed with a nail-ridden board of wood? A heart attack? They're doing them all. Morbid? Sure. But it's also a great way to process the inevitable. Plus, there are also more upbeat sequences dedicated to creating a vision of Dick going to Heaven. On papers, these segments of Dick Johnson is Dead seem like a departure for Kirsten Johnson as a filmmaker. She's spent her whole life in the film industry chronicling reality, not stuff shot on soundstages.In execution, though, they go part and parcel with the majority of the movie. Said majority features intimate footage of father-and-daughter coping with Dick's growing struggles mentally. Whether we're watching Dick in "Heaven" or in Kirsten's home, his perspective is always at the forefront of the proceedings.

In chronicling that perspective, Kirsten Johnson also lets viewers into how her point-of-view. She's filming things with equal parts rawness and empathy. There's such a rawness to the everyday conversations captured by her camera. An early scene of Kirsten divulging to her father that he can't drive his car anymore perfectly establishes this trait. Kirsten Johnson doesn't edit around the messy or heartbreaking parts of this exchange. Moments like Dick Johnson's softly uttering "Now I know what your mother felt like when we put her in a home" are left fully intact to give us a glimpse into what this man is going through.

Through using her camera to capture these and so many other tiny moments, Kirsten Johnson is creating video proof of a past her father may soon forget. Additionally, it's a way of preserving this man for herself. Kirsten Johnson notes in voice-over playing over old footage of her mother that she only has videos of her mom in the deepest state of her Alzheimer's. She never got the chance to film her mom as the vibrant human being that she was. That mistake won't be made twice. This mid-movie revelation cements that Dick Johnson is Dead is a testament to how filmmaking doesn't just have to be a vessel for escapism. It can also be a time capsule for a reality that ensures our loved ones can live on even after they pass.

Kirsten Johnson is delivering such thoughtful meditations on the very purpose of cinema all while having Dick Johnson and a troop of stuntmen recreate various scenarios for her father to die. As the movie goes on, these segments begin to evolve. This is done to accommodate both the declining mental state and comfort of Dick Johnson. This means the scripted segments of Dick Johnson is Dead go from recreating possible deaths to recreating an actual experience of Dick Johnson getting lost on Halloween night. Once again, the art of film is being used to recreate and cope with reality. There was a scary lack of control on both Dick and Kirsten's part that night. Through this scripted recreation, some of that control gets maintained.

How do we cope with tragedy? It's a question I've pondered a lot in the last four years after losing my Grandma and my Uncle Doug. I still don't have an answer to it and I've come to accept I probably never will. But one of Johnson's wisest pieces of voice-over in Dick Johnson is Dead gave me clarity on how to cope with the inevitable tragedies that will populate our life. "It would be so easy if loving only gave us the beautiful," Johnson muses over old footage of herself and her parents. "But what loving demands is that we face the fear of losing each other. Then, when it gets messy, we hold each other close. And when we can, we defiantly celebrate our brief moments of joy."

Kirsten Johnson sees vulnerability, unity, and joy as the cornerstones of coping with inevitable loss. They're also the qualities that inform her tremendously impactful filmmaking in Dick Johnson is Dead.