In Trying To Do So Much, Borat Subsequent Moviefilm Comes Up Short 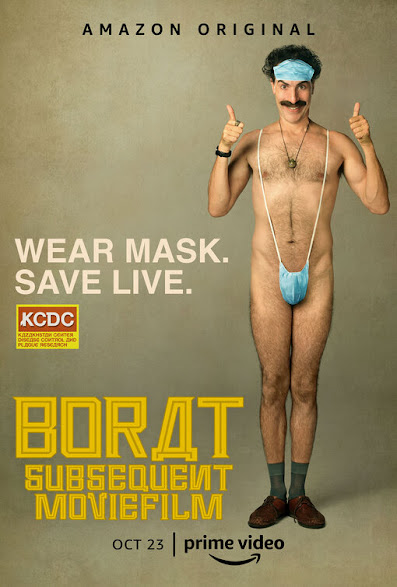 A lot has changed since the original Borat was released. For one thing, comedies focused on boisterous larger-than-life characters, the sort of figures Mike Myers and Jim Carrey made a career out of playing, have gone out of fashion. Grounded Judd Apatow-inspired comedies are the new go-to source for movie yuks. Meanwhile, the novelty of using Borat as a vessel to reveal that everyday people can be prejudiced isn’t quite as impactful in the age of Twitter. It seemed like there just might not be a place in the modern comedy movie landscape for the character behind the phrase “My Wife!”. But despite the hurdles, Cohen’s reprising his role as Borat for the new movie Borat Subsequent Moviefilm.

It’s been fourteen years since the original Borat and that plucky journalist from Kazhakstan is headed back to the United States of America. His mission this time is to get into the good graces of Donald Trump, who has befriended every authoritarian leader on the planet except for the lead of Kazhakaiztan. Borat’s come along with his daughter, Tutar Sagdiyev (Maria Bakalova), in tow as a potential bride for someone close to Trump. These two will navigate the American landscape, which has only gotten more...openly problematic, let’s say, in the fourteen years since Borat was last here.

It must have been strange making Borat Subsequent Moviefilm. Having kicked off filming last Fall, nobody behind-the-scenes could have predicted the arrival of the coronavirus (COVID-19) pandemic. It may not have been in the shooting script but how could Borat ignore this ongoing health crisis? In an attempt to cover all these real-world hot button topics, Borat Subsequent Moviefilm ends up strained. The most distracting sign that Borat Subsequent Moviefilm is trying to stitch together a lot of disparate material is Cohen’s omnipresent voiceover narration. This has to do a lot of heavy lifting carrying the film from one ripped-from-the-headlines topic to the next. Especially awkward is a transition from Borat going on a personal mission to him suddenly navigating a world affected by COVID-19.

Borat Subsequent Moviefilm too often feels pieced together by scotch tape. Even amusing segments, like Borat briefly working at a barbershop, are so detached from the rest of the movie that they feel like discarded Ali G Show or What Is America? sketches. Further hindering Borat is how it’s torn between opposing narrative impulses. On the one hand, it wants to recognize as many real-world issues as possible through episodic comedy adventures. On the other hand, it also wants to do a strangely conventional narrative involving Borat & his daughter. Borat can be a lot of things but predictable is not one of them. Unfortunately, watching him go down familiar character beats regarding his relationship to Tutar ends up being pretty predictable. That, as Borat might say, is not very nice.

In trying to spin all these narrative plates, jokes get lost in the shuffle. Though Borat Subsequent Moviefilm as a whole can't escape its messy nature, the various antics Borat and especially his daughter get into deliver a high amount of giggles. But yes, there are laughs to be had here. Adding Tutar to the mix as Borat's spirited daughter turns out to be a great way to keep the Borat character fresh. Maria Bakalova turns out to be Sacha Baron Cohen’s equal, and sometimes even superior when it comes to gross-out bravura. She’s a lot of fun in her ribald antics, with the only downside to Nowak’s performance being that her absence is truly felt whenever she’s not on-screen.

Borat’s interactions with everyday Americans, meanwhile, aren’t quite as impactful as the ones seen in the original film. This is mostly because it’s not as surprising to hear, say, sexist views of women coming out of the mouth of an Instagram influencer. Still, some of the extended set pieces involving Borat getting people to lay their prejudices out bare do inspire both chuckles and gasps, particularly a sequence involving Borat’s country music ditty. Plus, giving Borat a daughter and a bunch of disguises to don (he has to conceal his identity after the popularity of the first movie) turns out to be a great way for Borat Subsequent Moviefilm to ensure it’s more than just a rerun of the original.