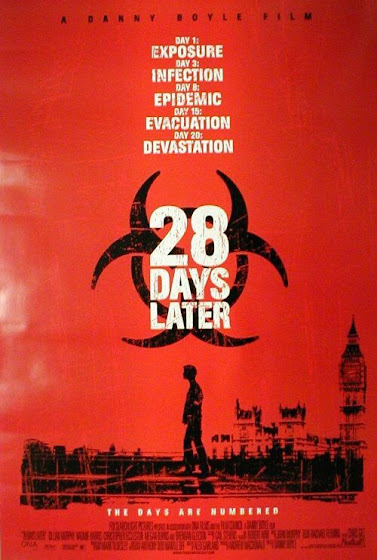 Entry #20: 28 Days Later
Zombies came roaring back at the start of the 2000s. Like any cinematic trend, it wasn't just one movie that caused this resurgence. Zack Snyder's Dawn of the Dead remake while Shaun of the Dead, while a parody of the genre, still helped to spur renewed interest in the undead. Before either of those movies was Danny Boyle's 2002 feature 28 Days Later. This one proved especially impactful due to how it established a new pop culture norm for fast-moving zombies rather than the slower ones that had been the norm ever since George A. Romero's Night of the Living Dead. While zombie fans remain divided over whether fast zombies are an improvement or not, it's much more certain that 28 Days Later is a darn good movie, zombie-affiliated or otherwise.

28 Days Later begins with an utterly terrifying prospect; what if you woke up and the whole world was different? This isn't even a Rip Van Winkle scenario where decades have passed, which makes it at least understandable why everything has been upended. Jim (Cillian Murphy) was in a coma in a hospital for only four weeks when the world went to hell. Now awakened, Jim wanders the empty streets of London before eventually discovering that the undead are roaming the country. Teaming up with one of the human survivors, Selena (Naomi Harris),  Jim is trying to adjust to a radically different world and stay one step ahead of the flesh-hunry undead.

Danny Boyle has shown a gift for zeroing in on tangible humanity in the middle of much larger stories. The internal anguish defining a bunch of street punks in Trainspotting. A contestant on Who Wants to Be a Millionaire is deeply explored and revealed to be far more than just a game show participant . Even Steve Jobs, a mythic figure in pop culture, got unearthed as a complicated human being in the hands of Boyle. No surprise, then, that a zombie apocalypse allows Boyle a chance to linger on the strands of humanity left and focus on them in an intimate manner. Zombie carnage abounds, of course, but so too does a constant sense of what is making these survivors tick.

Contrary to the wall-to-wall grimness that defines something like The Walking Dead, it's nifty how there's discernible humanity in the people who inhabit 28 Days Later. This is especially apparent in the rapport between ftaher-and-daughter duo Frank (Brendan Gleeson) and Hannah (Megan Burns). It's the end of the world, sure, but they goof around with shopping carts in an empty grocery store or Hannah will bonk Frank on the head with a suitcase. It's the same kind of goofball behavior they'd engage in even if an apocalypse wasn't tearing apart the world. Juxtaposing normalcy against bleak doomsday material serves 28 Days Later quite well, as seen by an oddly moving scene of our principal leads observing a bunch of horses just galloping along as the world around them crumbles.

Of course, this is still a zombie movie, so it's not all galloping horses and father/daughter shenanigans. There's also lots of super-speedy zombie carnage to deal with. Said violence is dleivered through a  rapid-fire editing and hyperactive camerawork that will prove familiar to anyone whose watched Boyle's earliest movies. Jim's first time running from zombies has some visually murky moments, but otherwise, 28 Days Later does a great job making this world seem not just scary but utterly overwhelming. Zombies are crashing through doors, windows or anything else in their way. Danger can appear at any moment and the visual elements of 28 Days Later harrowingly reflect this sense of unpredictability.

Of course, much like in Night of the Living Dead and so many other pieces of zombie-centric media, humans end up being the principal villains of 28 Days Later rather than zombies. Really makes you think whose the real monster, huh? In all seriousness, though it's not the boldest take on a zombie movie, the third-act of 28 Days Later reaffirms that familiar storytelling can be made to feel brand-new so long as the execution is good. Here, the intense filmmaking, not to mention some nicely cathartic gruesome deaths, ensure that it's able to lend a new dimension to the idea of humans being the real foes during a zombie apocalypse. No wonder zombies got a new lease on life after 28 Days Later. With this movie, director Danny Boyle has managed to make stories about the undead feel more alive than ever.