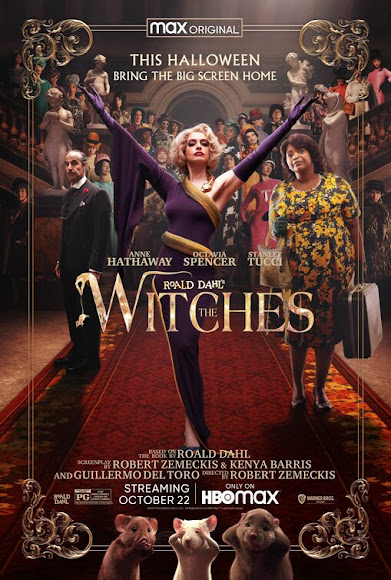 With the caveat that, yes, Roald Dahl was an alleged anti-semite, the children books by Roald Dahl proved to be some of my favorites as a kid. A simple reason I enjoyed them was how they weren't afraid to get dark. When you're a kid, entertainment that doesn't talk down to you is like catnip. So it is with Dahl's works, which weren't afraid to depict the despicableness of the world. Characters could get gobbled up by giants, get squished by gigantic peaches, and get sucked up chocolate pipes with no prior warning. None of his books went quite as hardcore with darkness as The Witches, which dealt with a band of witches who wanted to turn kids into mice. Like all kids books, The Witches ends with the child protagonist becoming comfortable with his own impending death. That's just what Dahl books did.
The newest attempt to translate Dahl's books into the world of movies comes with The Witches, which hails from director Robert Zemeckis. The basic plot skeleton of the original is kept intact, though th setting has been changed to Alabama circa. 1968. An unnamed Hero Boy (Jahzir Kadeem Bruno) goes to live with his Grandma (Octavia Spencer) after his parents are killed in a car accident. While here, Hero Boy learns that witches are real and want nothing more than to snuff out all children. In an attempt to evade these witches, Hero Boy and Grandma go to stay a luxurious hotel. Unbeknownst to them, a gaggle of witches, led by Grand High Witch (Anne Hathaway), are staying here and have a new plot to turn kids into mice.

As far as late-period Zemeckis movies go, The Witches is far more tolerable than Welcome to Marwen or The Polar Express. However, Hero Boy's first encounter with a witch in a supermarket confirmed my worst suspicions that The Witches would indulge in Zemeckis' worst modern-day filmmaking trait. It isn't enough for this witch to act unusual or adhere to the witch dress code (long gloves, wigs, shoes, etc.) established by Dahl's text. This witch also must have a giant glaringly CGI snake slither down her arm. Aren't these witches supposed to be incognito? That's the whole point of a disguise! Why would she have a CGI snake just out in the open?

This visual decision isn't bad because it departs from the source material. It's bad because it's a testament to how modern-day Zemeckis layers his scenes with in-your-face CGI that make subtext text. He's like George Lucas randomly adding a Dug to a nighttime scene of Return of the Jedi. The heavy reliance on CGI ends up undercutting moments that could have been enjoyably creepy in The Witches. You need things to be tangible to be scary and the distractingly fake nature of The Witches' use of CGI, like Grand High Witches cartoony enhanced nostrils, just makes the whole thing feel artificial, not eerie. The one exception here in the Grand High Witches fittingly unnerving elongated CGI arms. Credit where credit is due, those arms are pure nightmare fuel!

The screenplay, credited to Zemeckis, Kenya Barris, and Guillermo del Toro, fares better at conveying a sense of actual dread, at least initially. Early scenes of Hero Boy coping with the loss of his parents at least take the time to show that his recovery isn't an immediate thing. Similarly, the initial instances where Hero Boy is learning about the witches have a fun campfire story vibe to them. But the second half of the story goes in a much more hurried direction. Here, The Witches finds itself much too in love with the antics of talking CGI animals as well as undercutting any sense of danger. Hero Boy is always so confident in his ability to take down witches that there's never any suspense even by the standards of a kid's movie.

Without much in the way of suspense in its back-half, The Witches mostly has to lean on the performances of its cast to keep the audience entertained. Luckily, Octavia Spencer does good work in the role of Grandma, and major props to her for acting so naturally off of CGI co-stars in her later scenes. The MVP of the cast, though, is easily Anne Hathaway, who is having a ball eating up the screen as the Grand High Witch. Armed with dialogue that makes no effort to conceal her wicked nature and a thick European accent, Hathaway has thrown caution to the wind, thank God. If nothing else, The Witches delivers some delightful camp with Hathaway's performance.

The rest of The Witches mostly falls under the category of forgettable. Aside from a staggeringly miscalculated ending (which combines a dance party set to We Are Family and a sequel-tease), little of it offends. But also, little of it leaves any kind of mark. Even kids, the ones raised on Coraline, The Nightmare Before Christmas and the original Witches book, will probably be hoping for more bite out of The Witches. Dahl's books worked so well because they didn't talk down to kids. Meanwhile, the Robert Zemeckis take on The Witches constantly sands off the edges of its own story to placate youngsters. In the process, we're left with a movie that's bound to leave few satisfied but most disappointed.

I guess it could have been worse though. They could have given The Grand High Witch a father who was also a dentist...

The Witches is now available to stream on HBO Max.

Posted by Douglas Laman (NerdInTheBasement) at 10:27 AM