Austin Film Festival: Whether You're a Bowie Super-Fan or Not, Stardust Proves Infuriatingly Incompetent 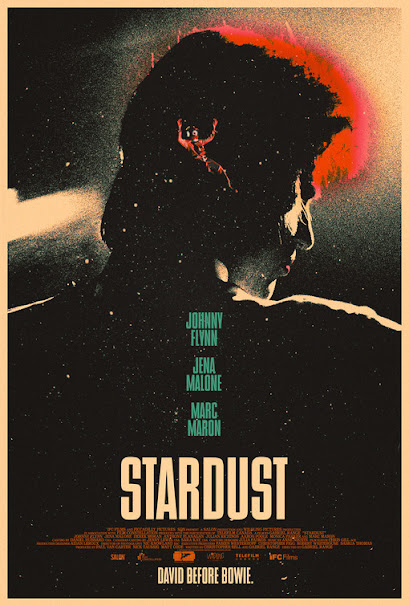 Who is this movie for?

Often times, that question is redundant. A piece of art doesn't have to be made for anyone beyond the person crafting it. Other times though, one can't help but wonder who the target audience for a movie is. Take Stardust, for example. This David Bowie biopic is a mechanical mixture of Bohemian Rhapsody and A Beautiful Mind. Who is this for? A sanitized take on Bowie would seemingly be for older audiences but would that crowd have any interest in a Bowie biopic in the first place? And the whole thing seems to be made from the ground-up to alienate fans of either Bowie or good filmmaking.

Stardust is the cinematic equivalent of a bad singer belting out a tired rendition of Billy Joel's Piano Man to an empty lobby at a Holiday Inn. It's lazy art made for exactly nobody.

Stardust follows David Bowie (Johnny Flynn) at the start of 1971 as he embarks on an American tour to promote hs newest album. Bowie's eccentric stage persona has alienated all American publicists save for Ron Oberman (Marc Maron). He see's something special in Bowie even after this rock star keeps botching high-profile interviews. As Bowie and Oberman try to make America fall in love with this singer, Bowie has a personal crisis centered on his brother. No, his brother didn't die in a machete fight when they were young. His brothers in an asylum, suffering from schizophrenia as part of a long-tradition of mental health issues in Bowie's family. Bowie now struggles to establish his own new identity in the face of his family's past and the modern-day world's rejection of him.

The greatest flaw in Stardust's screenplay by Christopher Bell and Gabriel Range (the latter of whom also directs) is how often it sidelines Bowie in his own story. The movie treats Bowie as a sideshow act we're supposed to laugh at. In the hands of this script and Flynn's performance, Bowie is more like a late-period Johnny Depp character. He's a bunch of eccentricities (like engaging in a mime performance during an interview) but no actual personality. Scenes set inside his head prove similarly underwhelming. Stardust is more interested in using Bowie's personal troubles to craft a tidy origin story for his Ziggy Stardust persona than using them to explore Bowie as a human being.

This caricature of David Bowie is plopped into a rote road trip story where Bowie and Oberman spend the first-half of Stardust engaging in the same dynamic as Dennis the Menace and Mr. Wilson. Bowie will do something wacky, Oberman gets frustrated, the two barely reconcile, the road trip continues until Bowie's next round of shenanigans. Rinse, wash, repeat. On and on this goes. All the while, the script forgot to give us any reason to care about these characters. This is mainly due to the staggeringly stupid decision to keep what's aching this version of Bowie a secret until the final half-hour. Going this route makes it impossible to get a hold on who Bowie is as a person. By the time we understand his motivation, it's too little, too late.

Then there are the characters surrounding Bowie and Oberman, which include Jena Malone as Kimberly Guilfoyle as Angie Bowie. These figures frequently talk about either how weird or great Bowie is as an artist. The praiseworthy dialogue about Bowie begins to feel like Tobias Funke trying to do awkward watercooler talk after a while. All of this talk feels so hollow, though, since Stardust never shows us the performances inspiring all this talk. You see, Stardust isn't legally allowed to use any of Bowie's actual music. This means the only songs sung by this version of Bowie are covers of tunes by Jacques Brel. Thus, we never get to actually see the performances that are inspiring all of the in-movie conversations. It's a terrible case of telling but not showing. To boot, removing sequences of Bowie singing songs on-stage robs Stardust any opportunities for visual extravagance. Under the direction of Range, the whole production looks like a TNT original movie processed through a washed-out color filter. Even just some mechanically-orchestrated musical numbers could have livened up the color palette.

Then again, a climax featuring Bowie performing on-stage, complete with a laughably bad recreation of his Ziggy Stardust outfit, is so horrendous that maybe it's a blessing Stardust didn't give us more music. Also a no-show here? Any exploration of Bowie's sexuality. Anytime Bowie's gender fluidity gets brought up here, it's for either jokes or comments from bigots about how "weird" it is to see a man wearing a dress or makeup. Meanwhile, the only explicit depiction of queerness is two ladies kissing, a moment shot for maximum male gaze pleasure. Starman is a pretty bad music biopic all around. However, it's total botching of Bowie's sexuality and gender makes it feel like something extra gross. Stardust is nothing short of the "safe" version of Bowie's life that your homophobic aunt would adore.

Stardust doesn't just betray its central subject when it comes to queer material. Bowie was a person who pushed artistic boundaries whereas Stardust is all too happy to fit snugly into a music biopic box. This is a movie that conforms to the norms whereas the real Bowie did anything but. Worst of all is the baffling idea to make a David Bowie movie that keeps everything about this artist at arms' length. His internal psyche, his music, his sexuality, none of it is explored in Stardust. What we're left with is a hollow mess that oscillates between being boring and uncomfortable.  Who knows if there's life on Mars, but I know for sure there's no life in Stardust.

Posted by Douglas Laman (NerdInTheBasement) at 9:25 AM