13 Days of First-Time Frights: The Innocents 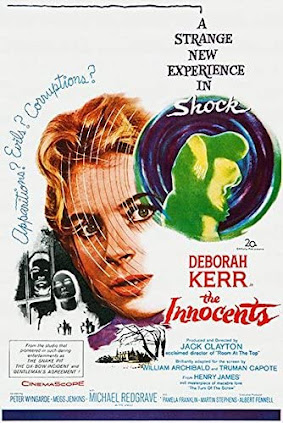 13 Days of First-Time Frights is a series of reviews where Douglas Laman, in the spirit of Halloween, watches and writes about thirteen horror first-time watches These reviews will be posted each Tuesday and Thursday, as well as the three Wednesdays and a Friday, throughout October 2020.
Entry #23: The Innocents

Does anyone remember that movie from January of this year called The Turning? I can't blame you if you don't considering that feels like an entire lifetime ago. That horror movie directed by Floria Sigismondi didn't call attention to the fact that it was based on previously existing source material. But it's a major movie in 2020, so of course, it was! In this case, the 1898 Henry James horror novella The Turning of the Screw was the inspiration for The Turning. This new feature was not the first time the novel had made its way to the big screen. Decades earlier, it had been adapted into a Deborah Kerr vehicle entitled The Innocents.

Miss Giddens (Deborah Kerr) is very excited about her new job. She's been tasked with looking over the two kids, Miles (Martin Stephens) and Flora (Pamela Franklin), of a wealthy governor. The mansion the kids live at is just glamorous and apparently the youngsters are adorable too. Now, of course, The Innocents is a horror film, so you know this can't be as simple as just another nanny job. On the premises of this place are a pair of ghosts that keep appearing to Miss Giddens and seem to be connected to abnormal behavior in the children. Could there be some haunted secrets in this seemingly idyllic location? Miss Giddens is going to get to the bottom of that if it killers her.

Across The Innocents, there's this growing sense of something being wrong. While the audience see's recurring glimpses of the ghosts driving Miss Giddens mad, we're never certain if they're totally real. The Innocents challenges the viewer to question what is reality and what isn't. In the process, an eerie atmosphere is created even when nothing obstenisbly scary is even happening on-screen. Like so many great horror movies, The Innocents isn't about the horrors you see but the horrors in your mind. In this case, the uncertainty over what's real or not, as well as the stability of our lead character, ensure constant terror hangs over the proceedings.

Aiding the persistent ominous tone is the environment the lead characers inhabit. The lavish manor Miles and Flora inhabit certainly looks like a postcard snapshot of wealthy living. But in the hands of director Jack Clayton, this mansion and its grounds can go from looking scrumptious to being terrifying. Specifically, Miss Giddens is dwarfed by everything around her. Add a few shadows and the creepy tone of The Innocents and the expansive nature of this mansion suddenly goes from feeling spacious to terrifying. Every nook and cranny of this place, from a lovely lake to the attic, is mean to be a reflection of exorbinant wealth but The Innocents cunningly turns it into a perfect visual reflections of Miss Giddens' despair.

The Innocents is just as creepy on-screen as it is on paper. The latter achievemt is due to screenwriters William Archibald and Truman Capote not only committing to their grim story but hinging the whole thing on the troubles of refusing to confront the past. Everyone around Miss Giddens, from her employer to a maid she befriends, tells her to just forget about what happened to her predecessor (who now serves as one of the ghosts haunting her). They say to bury her head in the sand and just ignore reality. Of course, much as it does in real life, that only allows problems to build up rather than actually solve anything.

Grounding the scares in a very real phenomenon mirrors how Deborah Kerr does superb work in her lead performance grounding the plight of Miss Giddens in something tangible. Her depiction of Miss Gideens becoming more and more unraveled as the movie goes on really stirs something inside of you. Kerr lends authenticity to this depiction of madness...or is it determination? Much like with the slippery grasp The Innocents has on reality, it also lends a similar sense of ambiguity to the psychological state of Giddens. The lack of a concrete psychological state for her character just makes The Innocents all the more effective as an eerie piece of cinema.