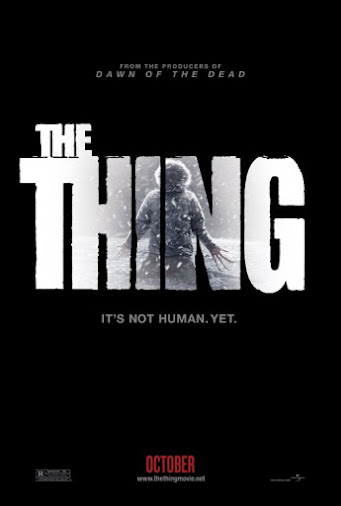 13 Days of First-Time Frights is a series of reviews where Douglas Laman, in the spirit of Halloween, watches and writes about thirteen horror first-time watches These reviews will be posted each Tuesday and Thursday, as well as the three Wednesdays and a Friday, throughout October 2020.
Entry #18: The Thing (2011)

Who exactly is the 2011 Thing movie for?

If you're a total newcomer to the world of The Thing, I'm not sure the movie itself will have much value to you. The scares just aren't that scary and it's never able to establish its own compelling standalone identity. An epilogue playing over the credits that ties directly into the opening of the 1982 movie will prove incoherent for those who haven't seen it.

What about fans of the 1982 movie? Well, there's not much here either. The Thing is a prequel, not a remake, but it functions like a traditional remake. It's another story about a bunch of people trapped in an icy isolated outpost who come face-to-face with a shapeshifting alien. You've seen this before, with the primary different being that, back in 1982, trailblazing practical effects were used to render the titular Thing.

Perhaps then the 2011 Thing isn't for any audience of moviegoers. Perhaps it's target demo is studio executives at Universal. Remember, The Thing was coming eight years after The Texas Chainsaw Massacre popularized the trend of remaking classic horror movies. With all the biggest library titles like Friday the 13th exploited, the trend was on its way out. Universal was now just looking to make sure they had a remake of every big horror title in their library. Thus, a Thing prequel that functioned as a remake was born. I'm sure studio executives gobbled it up. The rest of us, though, reacted with a shrug.

The Thing's protagonist is Kate Lloyd (Mary Elizabeth Winstead), an archeologist called up to examine what the crew of a Norwegian research station has found in the Arctic. Turns out, they've gotten a hold of an alien, trapped for centuries in the ice. While everyone is celebrating their discovery, the beast gets loose. As Lloyd quickly discovers, this alien has the unique ability to copy its prey. Taking the shape of any organic material, this Thing is now hunting down the people on this base. Paranoia begins to grow in this chilly wasteland. There's nobody anyone can trust. Who's gonna make it out alive in this movie whose resolution was already made apparent in the original Thing?

Because this new Thing adheres so closely to John Carpenter's version of The Thing, you can't help but notice how this new version comes up short compared to its predecessor. Ennio Morricone's iconic score has been replaced by disposable compositions from Marco Beltrami. Memorable character actors like Keith David and Wilfred Brimley are here traded out for an interchangeable cast of heavily-bearded actors. Worst of all, though, is the creature effects, which are rendered through hideous CGI. The mind reels at seeing The Thing on the big screen in 2011 and seeing visual effects straight out of Spawn or Lost in Space.

Worst of all, these CGI renderings of the Thing mean the creature is out in the open for prolonged periods of time. Much like the CGI Xenomorph romping around in broad daylight in Alien: Covenant, being able to see more of a famous movie monster doesn't make them scarier. Any of the intrigue of the original is gone and The Thing fails to substitute it with anything new. It's content to just be a generic brand extension exercise. A handful of solid suspense scenes (mostly centered on more intimate matters than a giant CGI monstrosity) and game performances from the cast ensure it's harmless and more average than bad. But those positive details still can't make The Thing feel like anything more than a perfunctory prequel.

What a shame, especially since casting a woman in the lead role immediately lends the possibility of this new Thing having something new to offer. Oodles of thoughtful academia has been published over John Carpenter's Thing being a reflection on various aspects of masculinity. Making a new Thing movie that is instead a reflection of femininity could have at least been a new approach. But Kate's gender proves superfluous to the whole movie. Mary Elizabeth Winstead tries her best with this role, but she can't overcome poor writing that fails to give her even the barest amount of personality. The potential to unlock new gender-related examinations in the world of The Thing goes unrealized.

Who is The Thing for? Well, certainly not people looking for top-shelf horror. Oh what could have been if those original practical effects made it into the final cut...