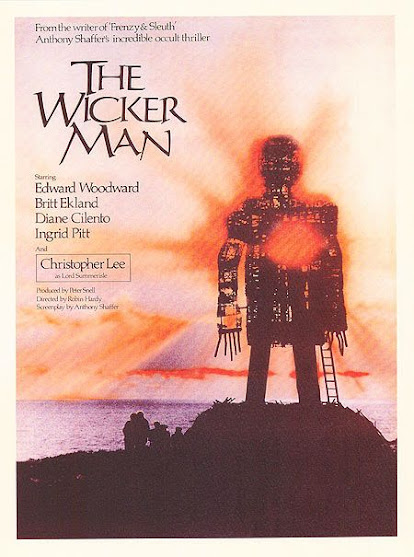 13 Days of First-Time Frights is a series of reviews where Douglas Laman, in the spirit of Halloween, watches and writes about thirteen horror first-time watches These reviews will be posted each Tuesday and Thursday, as well as the three Wednesdays and a Friday, throughout October 2020.
Entry #25: The Wicker Man
If you're a moviegoer of a certain age, you might know The Wicker Man only as a 2006 movie starring Nicolas Cage. More specifically, you might know The Wicker Man as a 2006 movie that spawned a GIF's of Nicolas Cage getting attacked by bee's Those GIF's are pretty fun, no question. The movie itself, meanwhile, is a disaster but the fun kind. It's one step above The Creeping Terror, just a totally miscalculated horror movie more capable of delivering unintentional laughs than anything resembling scares. But before all of that nonsense, there was the original Wicker Man, which is rightfully hailed as one of the all-time great horror movies.

Police Sergeant Neil Howie (Edward Woodward) has come to the remote island of Sumerisle to investigate something serious. He has received a note that a girl named Rowan Morrison has gone missing on this island. When he arrives, Howie's suspicious are immediately activated by how nobody on this island seems to believe Morrison even exists. Perturbed by the fact that nobody on this island cares a girl is missing, Howie becomes even more disturbed once he realizes that this island's inhabitants are worshipping Pagan Celtic Gods. As a Christian man, Howie is utterly appalled by this theological transgression and only becomes even more so after a talk with the island's leader, Lord Summerisle (Christopher Lee).

The 1973 Wicker Man made me dislike that new Wicker Man remake even more than I already! Now it's apparent that the remake goes the safe route in every place imaginable! Most notably, the musical numbers of the original Wicker Man and the theological quarrels are all gone. To make a generic 21st-century horror movie, The Wicker Man (2006) sucked all the personality out of its predecessor. Oh well, at least we'll always have this original movie, which really is an impressive feat. Screenwriter Anthony Shaffer's ambition with The Wicker Man to create a more "literate" horror movie has been fulfilled and then some!

Much like modern-day horror movie Midsommar, Wicker Man realizes how much terrifying things can be when caught in broad daylight. Nighttime is heavily eschewed in favor of setting Howie's investigation in the middle of the day. With the sun pouring in, Wicker Man often conjures up images that are just as beautiful as they are unnerving. The first time Howie sees a group of naked women engaging in a pagan ritual, for instance, is framed and shot to look warm, inviting and even like something you'd seen in a classical painting. The reason this sight is so terrifying to Howie is that it goes against his beliefs, not because it's inherently an unnerving image.

All throughout Shaffer's script, he finds unique and specific ways to define what's "scary" in The Wicker Man. A prime example of this is how Howie takes it upon himself to barge into everybody's homes in the third act to investigate where Rowan could be. Suddenly, our supposed "protagonist" is carrying out more intrusive acts than Howie's antagonists. If someone did this in your own home, wouldn't it be chilling? The Wicker Man keeps fiddling around with what is scary and to whom and it makes for such a thrilling experience. All the while, director Robin Hardy delivers striking images that deliver equal levels of beauty and scares.

Nowhere is this more apparent than that iconic climax, which simultaneously rivets, unnerves, and leaves you in visual awe. Howie and the residents of Summerisle engaging in competing religious chants as Howie burns alive in a giant wooden man. The fact that The Wicker Man is keeping the religious elements of its story so apparent right down to its final scene is thoroughly impressive. Meanwhile, the shots of this wooden figure being engulfed in the flames are flat-out gorgeous. The Wicker Man closes out with the kind of craftsmanship and ambition that defines the entire production. Don't let that dreadful remake steer you away from the original Wicker Man, which remains a feat of horror filmmaking nearly fifty years later.