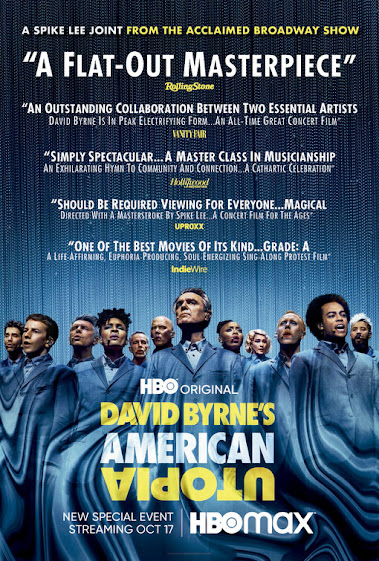 American Utopia, a filmed recording of the Broadway show of the same name, begins with musician David Byrne contemplating how many neural connections we lose when we go from babies to adults. "Does that mean we get dumber as we get older?" Byrne ponders to the audience. Byrne's desire to understand what happens to those connections establishes the contemplative attitude of the whole show. American Utopia then gets into twenty different musical performances delivered by Byrne and eleven accompanying musicians. If you're familiar with the last concert film Byrne headlined, Stop Making Sense, you'll get an idea for the kind of creativity that's unleashed in American Utopia.

However, anyone expecting just a rehash of Stop Making Sense will be disappointed. American Utopia is totally its own creation and a magnificent creation at that. From its very first song, Here, American Utopia hits the ground running with such bold creative swings. Here has an ethereal quality to it, thanks to the soft chants in the background and the use of instruments like a sitar and a tambourine. Listening to it makes one feel like they're occupying some sort of dreamscape you've never seen before. The gentle vocals of Byrne are the perfect guide to take you through this new land. As the music soaks over you, American Utopia reassures the viewer that they're in masterful hands.

From there, American Utopia delivers a barrage of songs that carry the kind of distinct sounds and unique lyrics we've all come to expect from Byrne tunes. Much like Wild Wild Life or Take Me To The River, the songs in American Utopia are the kind of tunes you want to sing along to even if you're just hearing them for the first time. How can you not want to wrap your lips around lyrics like "Oh, I'm wicked and I'm lazy"? Accompanying the memorable words are sounds that just dig into your eardrums and don't let go. The drums in Lazy, for example, create an amusingly energetic contrast to the lyrics praising the virtue of lethargy.

Such drumming skills demonstrate that, across these assorted tunes, the accompanying musicians are just as much of a treat to watch as the captivating Byrne. It's truly impressive to watch them gracefully adapt to new styles and tones whenever the songs require it. They can sound like a jubilant marching band for one tune and then immediately switch gears to carry a more somber quality when the occasion calls for it. Among the musicians, the most memorable have to be Chris Giarmo and Tendayi Kuumba. At times, these two act as extensions of Byrne himself, with this becoming literal for one musical number where they move his appendages across the stage. Giarmo and Kuumba are the most prominent of the accompanying musicians in terms of screentime. However, they more than earn their pronounced presence thanks to how they can seemingly do everything from play instruments to dance to engage in physical comedy.

These talented performers play off a sparse stage that surrounds everyone with what looks a wraparound Doorway Bead Curtain. The minimalist approach to the set turns out to be a gift in many ways. For one thing, it's a great way to emphasize the focus on the actors. For another, it's easy to implement new elements to the backdrop. This is most notably seen in the musical number I Should Watch TV, which incorporated a gigantic beaming light on the side of the stage to simulate the warm glow of a television set. The set and surrounding beads are also covered in a light blue color that's extremely pleasing to look at. One can appreciate these visual accomplishments thanks to the exquisite direction of Spike Lee. Like the best visual effects, Lee's camerawork is so good because you so often forget about it. Lee immerses you in the on-stage performance to the point that we forget we're even watching a pre-recorded production.

All of these visual and musical gifts are used for splendid entertainment but Byrne also wants to use American Utopia to make the audience appreciate the wider world around them. From a segment dedicated to emphasizing the unique home countries of the individual musicians to Byrne engaging in amusing visual comedy to drive home how important local elections are, American Utopia isn't just escapism. It's also conscious of the shortcomings of the real world. This is most notably seen in the most stirring portion of the production, a rendition of the Janelle Monae song Hell You Talmbout. Here, Byrne and his musicians urge viewers to say the names of lives lost to race-based police brutality while photographs of the likes of Trayvon Martin and Eric Garner are held up, sometimes by their own relatives.

In the middle of American Utopia, Byrne goes into a monologue about dadaist artists and he describes their aims as "Using nonsense to make sense of this nonsensical world". In a way, Byrne and his accompanying musicians are aiming to do something similar. The lyrics of songs like Every Day Is A Miracle may sound like total lunacy out of context. However, tunes like this and the other ditties that populate American Utopia are grappling with matters that are all too real. Songs like Hell You Talmbout do this through appropriately overt means that force viewers to confront real systemic problems that are too often ignored. Others like Once in a Lifetime and Toe Jam tap into distinctly relatable feelings through their bold artistic tendencies.

I was particularly struck by this latter type of song while watching I Dance Like This. The song swiftly jumps from tranquility in its verses to an aggressive sound during its chorus. To me, I took that as a realistic reflection of what it's like to live life as someone considered "different" from society. You don't always feel just one way about it. Sometimes you're at peace with it, other times you're feeling much more abrasive about it. The emotional complexities of that experience are reflected in the varied sounds of I Dance Like This. Whenever Byrne and his musicians chant "If we could dance better, then you know that we would" against harsh guitar strums, you can feel the frustrations of anyone who has ever been told to erase the things that make them "different" (like gender, sexuality, disability, etc.) This is just one example of how the songs of American Utopia so effectively channel the real world through creative means.

With I Dance Like This, American Utopia delivers a song that you can both rock out to and dissect in such an in-depth fashion. Believe it or not, the entire production is able to constantly deliver songs this good. American Utopia doesn't solve the problems of the world. No piece of art could ever do that. But American Utopia does give us a musical means to confront those problems. To boot, it emphasizes the power of unity and the virtues of individuality, two things so often ignored in this world. Watching this movie, the overwhelming nature of the world suddenly felt a bit more manageable. These qualities are reinforced by the movie's closing number, a rendition of Road to Nowhere. Never have the songs lyrics felt more inviting, more exhilarating, more like a call to action for people to be themselves, and to challenge the world they occupy.

David Byrne and director Spike Lee have crafted something special with American Utopia. It's a toe-tapping soul-enriching experience you do not want to miss.

American Utopia is now streaming on HBO Max and the HBO app.

Posted by Douglas Laman (NerdInTheBasement) at 10:56 AM