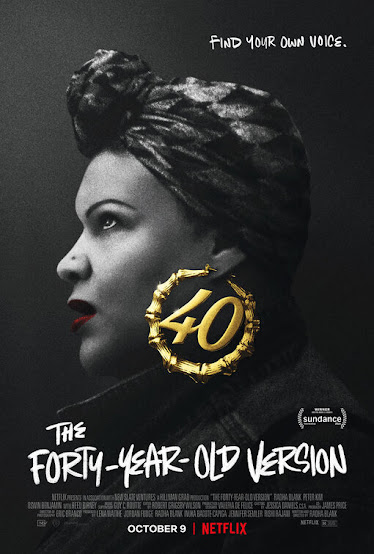 Success comes at a price. At least, that's how Radha (Radha Blank) sees things. She's a playwright and teacher in New York City who managed to secure a spot on a high-profile 30 Under 30 Playwrights list in her late twenties. That exciting development seemed to signal that her career was about to take off like a rocket. However, flash-forward to 2020, and Radha is approaching forty with all kinds of problems. She's reeling from her Mom's recent death, she can't get any of her plays produced, she's struggling to get through the students she teaches...is her life going nowhere? Just to vent her frustrations, she begins rapping and turns out to be surprisingly good at it. Just as Radha begins to embrace her new career field, she gets a chance to have her play, Harlem Ave., produced on Broadway, albeit in a creatively compromised manner.

The Forty-Year-Old Version will resonate as all too familiar for those who make art. The eternal struggle between fulfilling what society defines as success and fulfilling your own definition of success. Radha Blank's screenplay recognizes how easy it is to just say "Yes, I'll be true to my creative self" but that it's a whole other thing navigating the world of art and being true to that. For Radha, her experience with this conundrum is compounded by problems unique to artists of color. When society's vision of "success" is only defined by powerful white gatekeepers (here personified by a character named J. Whitman, played by Reed Birney), that means bolder material can get its edges sanded off. After all, what's deemed conventionally "successful" also isn't supposed to offend or challenge white audiences.

While the fictional character Radha grapples with her creative vision on Harlem Ave. getting stifled, writer/director/lead performer Radha Blank flourishes as an artist with The Forty-Year-Old Version. Her exploration of Radha's life brim with authenticity. I love how realistically Blank conjures up complex human experiences for her protagonist, like Radha constantly putting off the act of cleaning out her Mom's apartment or Radha's stoned rap performance that goes awry. Radha's life, like anyone's, is messy. Embracing that leads to The Forty-Year-Old Version being so consistently compelling. Just like our own lives, one never knows just where Radha's journey will take her next.

The realism and detail that marks Radha is also found in the variety of entertaining characters that surround her throughout The Forty-Year-Old-Version. This trait, as well as Blank's creativity as a writer, is especially noticeable in the handling of Radha's students. These kids could have easily been a mish-mash of hackneyed stereotypes, but they all feel like real people. Plus, it's so sweet that they all turn out to be genuinely excited for their teacher. Whether Radha is rapping or getting her show produced, these students are there to cheer her on, it's so wholesome. Particularly memorable among these students is are the characters Rosa (Haskiri Velazquez) and Elaine (Imani Lewis). Their dynamic ends up going in an unexpected direction that masterfully reinforces The Forty-Year-Old Version's ultimate thesis of embracing who you are above all else.

All of these characters are captured in a monochromatic color scheme. Cinematographer Eric Branco makes particularly good use of this visual detail anytime shadows are employed in The Forty-Year-Old Version. A scene of Radha and D (Oswin Benjamin) talking in a dressing room before Radha's first public performance especially makes great use of striking shadows to instill an appropriate sense of unease. In this scene, we also see how well Radha Blank utilizes empty space as a filmmaker. With a 2.39: 1 aspect ratio at her disposal, Blank makes the world around her protagonist feel vast, you can understand why she feels so overwhelmed by it. This affinity for wider shots is particularly noticeable whenever Radha is interacting with a local homeless man by the name of Lamont (Jacob Ming-Trent).

In his interactions with Radha, Lamont is always captured in a wide shot while Radha is framed in a close-up. This immediately conveys how the two characters keep such distance between one another. They're not friends, it's more like they're inadvertent neighbors. Plus, there's something inherently humorous about a character trying to carry on a conversation even while they're a great distance away. That's another great thing about The Forty-Year-Old Version, it's just oh so funny. There's so much to unpack in its thoughtful writing and filmmaking. But if you're also just looking for a good comedy, this movie has got you covered. A scene where two of Radha's students pitch an action/adventure play focused on a sperm warrior alone proves hysterical.