In Laman's Terms: OK, Where Do Movie Theaters Go NOW? 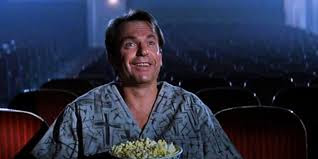 On Monday, news broke that Regal Cinemas, the second-biggest theater chain in North America, would be closing all 535 of its US locations for the near future. "This is not a decision we made lightly, and we did everything in our power to support a safe and sustainable reopening in the U.S.," said Mooky Greidinger, CEO of Regal's parent company Cineworld (per NPR). In response, the other two biggest movie theater chains in America, AMC Theatres and Cinemark, announced that their locations would not be closing anytime soon. American theatrical exhibition wasn't going into hibernation again, but with Regal's locations closing on Friday, it has suffered another blow.

Back in late August and early September, American movie theaters reopened their doors after closing in the wake of COVID-19 pandemic. The original plan was for Tenet to kick off a new resurgence of releases that would bring theatrical moviegoing back to its pre-COVID-19 state. In reality, Tenet ended up underperforming domestically compared to even the most generous expectations. Other new releases like The Broken Hearts Gallery and The New Mutants have also failed to bring in moviegoers. Autumn 2020 tentpoles like Wonder Woman 1984, No Time to Die and Candyman got delayed. Facing these factors, Regal chose to close down their locations for the near future.

Meanwhile, frustrated individuals of power in the exhibition industry have begun to look around for what's caused the domestic relaunch of theatrical moviegoing to go so awry so fast. This has included recurring targeting of Andrew Cuomo for not reopening New York movie theaters. While I'm no expert, I can tell you right now that problems with the theatrical exhibition industry in America go way deeper than New York. If people aren't going to the local Cinemark's in Texas (seriously, the theaters around here have been so empty), they're not gonna show up in droves in New York.

The central issue here is a lack of government funding, with the Orange Fuhrer abruptly refusing to help small businesses like independent movie theaters get the cash they need to stay alive. However, another problem here is the biggest movie theater chains (big corporations like Cinemark and AMC) refusing to see that the world has shifted. Through rushing to reopen like they did, movie theater chains showed a staggering lack of self-awareness of the outside world. Comments like  "This is the worst thing that could have happened, having Tenet open and nothing behind it. It’s the worst possible outcome and we needed that Mulan one-two punch behind it," which came from a "big circuit insider" speaking to Deadline in Sept. 2020, are common.

People in the American theater industry seriously thought that successfully reopening theaters would be as simple as turning on a light switch. It's not. With a pandemic still raging across the country, comments like the one above feel like a sick joke. It's not the lack of blockbusters that's the problem. It's the fact that theaters jumped too quickly. Trying to rush a return to "normalcy" only caused more problems. Now movie studios are delaying all their movies until 2021. Meanwhile, movie theaters are just burning money staying open to play few titles to even fewer moviegoers. Cuomo isn't the issue. It's big movie theater chains putting "normalcy" over the safety of moviegoers.

The aversion to reality on the part of the biggest movie theater chains comes as movie studios have had no choice but to face said reality in scheduling their movies. Dune, The Batman, Jurassic World: Dominion, they've all delayed their releases in the last week, with the postponement of Dune ensuring one less potential 2020 blockbuster for theaters to play. Theaters would like to just go back to playing movies regularly. With no new major movies on the docket for two months (Soul is currently scheduled for release on November 20, but there's no way that happens), though, that desire just isn't feasible.

Big chains like AMC and Cinemark will have to get by with a smattering of smaller titles like Honest Thief while independent theater chains (the ones who really have my sympathy in all of this mess) hope for a miracle when it comes to government aid. The government needs to give these businesses, particularly smaller independent locations, the money they need to stay operational. Meanwhile, the biggest movie theater chains need to start getting a grip on reality. Recent lucrative box office in countries like China show that movie theaters are far from dead. But if theaters keep trying to bring them back despite audiences clearly being uncomfortable with going during a pandemic, well, that could actually threaten the long-term viability of movie theaters domestically.

Where do movie theaters go now? It's hard to say given how both the upcoming release date calendar and COVID-19's impact on America changes every second. But hopefully, movie theaters, specifically ones owned by giant corporations, are going to a place more cognizant of the realities related to this pandemic.