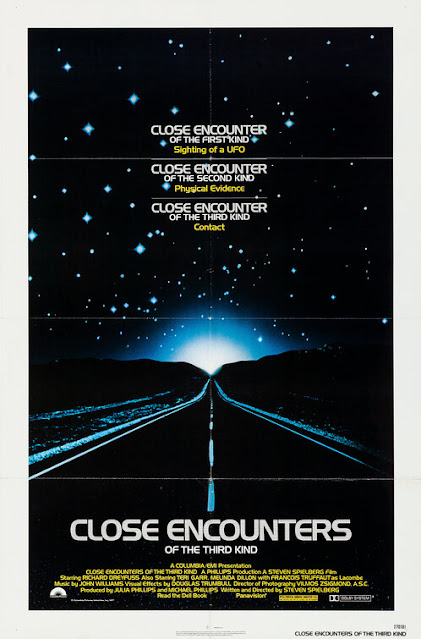 It's hard to imagine now, but there was a time when sci-fi movies featuring aliens and human beings crossing paths were not common in mainstream American cinema. In drive-in B-movies, the kind directed by Ed Wood, they were plentiful. But it was rare to see these type of movies get major budgets and the polish of professional filmmaking. This makes Close Encounters of the Third Kind the proto-model for an entire strain of American cinema. Everything from Independence Day to Arrival to The Avengers owes a tip of the hat to Steven Spielberg's 1977 feature. While being the originator of big-budget alien tales means Close Encounters is a simpler story (almost a fable, really) compared to the films it would inspire, it still packs a wallop when being viewed in 2020.

In the mold of fellow Spielberg movies Jurassic Park and Jaws, Close Encounters of the Third Kind plays things close to the chest as it begins. The word alien isn't even uttered at first. We just know government officials, including Claude Lacombe (Francois Truffaut), are curious about peculiar occurrences like the surprise reappearance of fighter jets from the 1940s. However, as the viewer is introduced to protagonist Roy Neary (Richard Dreyfuss), it soon becomes apparent that something otherworldly is happening here. Aliens have come to Earth and Roy, along with a select few other human beings, are obsessed with finding out more about these extra-terrestrials.

Close Encounters is a movie that's all about intrigue. The appearance of the aliens isn't the only thing Spielberg's screenplay keeps concealed. For much of the runtime, Neary's erratic behavior (as well as the structure he's fixated on building) is kept mysterious. There isn't just an air of uncertainty around here, Close Encounters is practically drowning in the unexplained. Playing things close to the chest allows Spielberg, as a filmmaker, to have some real fun in constantly pulling the rug out from under the viewer. Just look at a magnificent early shot where a pair of headlights pull up behind Neary's car...only to then start floating up into the air, revealing that those lights belong to a spaceship.

In this scene, we see how Spielberg merges the unexplained with a sense of wonder. Even in its most intense moments, Close Encounters isn't here to scare viewers. Even a shot of unconscious farm animals lying on the ground is later revealed to be the result of animals being sprayed with temporary sleeping gas. Spielberg wants to put you on the edge of your seat, not curled up in fear. It's like the antithesis to his later film, War of the Worlds. That 2005 alien invasion movie reflected a post-9/11 world where all you could do in the face of tragedies is run. With Close Encounters, this is a post-space race movie full of hope that humanity's future lies in the stars.

This sense of hope is best exemplified in an extended climax that eschews any fireworks or explosions for simple communication between two different species. Dialogue itself is largely absent here as both the viewer and in-movie characters simply soak in the majesty of the gigantic alien spaceship. Said spaceship is brought to life through practical effects work that still dazzles in 2020. The level of detail and tangibility on the model used for the spaceship is truly impressive. In another remarkable feat of visual effects work, even the aliens themselves, in their brief screentime, still look good. On a lighter note, I had to laugh at a moment where the aliens play the Jaws theme on their spaceship. Referencing your own movies, what a flex Spielberg!

Posted by Douglas Laman (NerdInTheBasement) at 11:31 AM