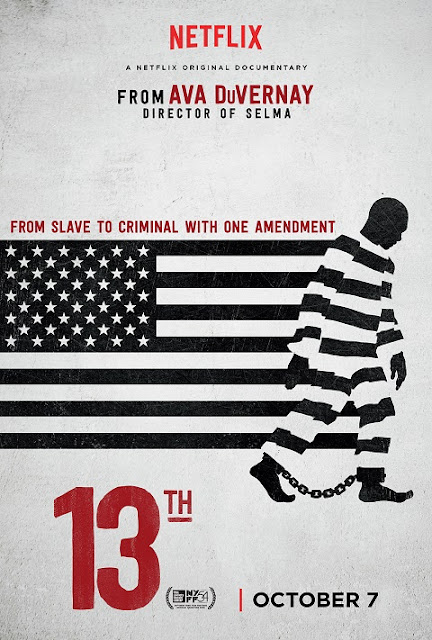 One of the key components of art even existing in the first place is for it to help us grapple with universal problems in any given society. Sometimes art engages with said issues in a more stylized manner, other times it manages to confront pervasive problems in a more naturalistic method. Documentaries tend to fall into that second classification, allowing filmmakers and audiences alike a chance to interact with actual people and locations that relate to pressing matters. That certainly seems like an apt way to sum up 13TH, a new documentary from director Ava DuVernay (now streaming on Netflix) that thoroughly investigates systemic racism in modern-day American society.

It's pretty clear that a large portion of movies made in Hollywood that focus on the concept of racism make sure they set their stories in the past in order to create the false impression that such inequality is a thing of the past, like disco or a Richard Nixon presidency. Setting a film about racism in the past isn't an inherently bad thing of course (Selma is obviously set in the 1960's and it's a fantastic motion picture), but the trend of constantly setting movies about the struggles of people of color in past eras robs one of the chance to look at the myriad of issues and examples of bigotry still impacting our society today.

Lo and behold, here comes 13TH to provide an in-depth examination of our modern day prison over-population problem, one stemming from decades of policies and procedures that explicitly target minorities for low-level non-violent offenses. Crucial events from decades past (including how the word "criminal" was used by former POTUS's like Ronald Reagan as derogatory shorthand for African-Americans) that have led to today's situation are explored in a similarly thorough manner. A light is cast upon the true level of scope of this de-humanizing matter by 13TH and the unflinching way it approaches the way African-Americans have been treated as sub-human over the decades through system manners both subtle and overt is extraordinary to witness.

The information about past and present-day intolerance is delivered through a large number of interview subjects who range from academic experts to civil rights activists who have actually been incarcerated. These interviews are filmed in a manner that lets the engrossing accounts from these human beings take center stage while a most interesting editing tactic is used in certain segments of the movie. A select few interview subjects have differing opinions on specific topics and their contradicting viewpoints are edited in a rhythm that simulates the feel of  a debate despite the two participants in the faux-debate never being in the same room together. It's a sly maneuver that adds vitality to the discussion portions of the movie and also a tactic 13TH never overuses.

As can be expected, the various interviews are accompanied by a large quantity of various pieces of archive footage from the past few decades, as well as thrice incorporating snippets from political comedy shows hosted by Stephen Colbert, John Oliver and Larry Wilmore. These brief appearances from these comedic programs is to have them explain organizations (such as John Oliver explaining ALEC) or specific individuals circumstances for improvement (Larry Wilmore handles that one). It's a truly clever way to convey and/or explain information to the viewer in a way that's mighty succinct.

A commonality through all of the interviews and archive footage that becomes readily apparent is the terrifyingly pervasive treatment of African-American citizens as "sub-human" individuals. Dating all the way back to 1915 when The Birth Of A Nation had depictions of African-Americans that wallowed in hurtful stereotypes to the way the word "criminals" was used as a connotation by various POTUS's to refer to African-Americans in a derogatory manner and conflate an entire ethnicity with the very act of breaking the law. The way the concept of systemically projecting the idea of African-American human beings being lesser than their white counterparts is transmitted may change from era to era, but it's a frightening constant in America.

13TH thoroughly digs deep into America's constant inability to treat African-American citizens as equals by shining a spotlight on the humanity on the numerous individuals of color affected by the systemic racism existing in this country that far too many toss aside. To say such an artistic goal has been met is an astounding accomplishment. Thank you Ava DuVernay for directing this vital documentary, which forces viewers to confront the brutal reality African-Americans in this country are all too aware of; systemic racism persists in this country in countless areas, including our prison system wherein African-Americans make up over 35% of the American prison population. That's a terrifying statistic that's just one of the horrifying realities 13TH is not at all afraid to confront with exemplary artistry and humanity.
Posted by Douglas Laman (NerdInTheBasement) at 3:02 PM