The Scariest Thing About Boo! A Madea Halloween Is Its Overlong Running Time 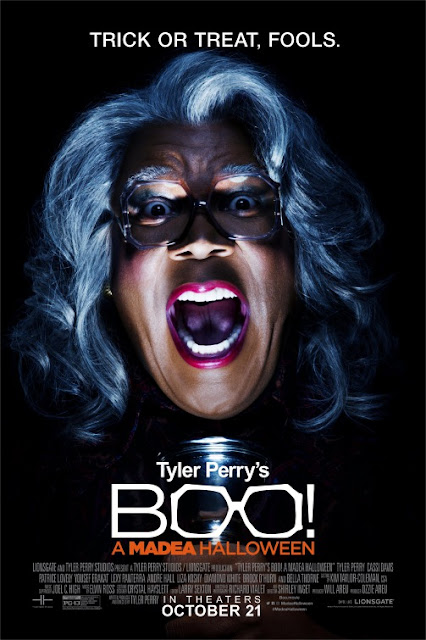 Tyler Perry's Boo! A Madea Halloween was quite the momentous movie for me, for you see, I have never watched any other entries in the Madea saga (aside from the opening five minutes of Madea Goes To Jail) or any Tyler Perry directorial effort for that matter. With the release of this new Madea feature (the first new Tyler Perry film since Land Of The Nerds started, believe it or not), it was time for me to get better acquainted with a filmmaker whose been met with non-stop critical derision over the past decade unless he's appearing in a David Fincher drama.

Yes, Madea (Tyler Perry), that unfiltered hammer-carrying old lady, is back for her seventh theatrical film. This time around, Madea and her similarly elderly pals are tasked with making sure that a 17-year old girl from going out and partaking in a Halloween-themed party a local Fraternity is holding. Said young lady manages to sneak out of the house, meaning it's now up to Madea and her chums to take on the extra endeavor of going out to look for this rebellious child at the big party, drumming up the ire of that local Fraternity in the process.

This is a very simple premise that obviously cannot work as a feature-length film, but Tyler Perry's screenplay attempts to just that, stretching the story beyond its breaking point by stuffing the running time with plenty of urine gags and an extended sequence involving a famous YouTuber twerking. The majority of the plot points in this film just feels like everyone killing time until Madea can drop another piece of "witty dialogue" or a slice of "introspective" wisdom that I'm sure is already on a T-Shirt on some sort of Tyler Perry owned-website. Madea is the driving force of anything and everything occurring in this movie, which wouldn't be a bad thing if the character was at all funny or interesting.

Now, the weirdest thing about this film is how much it's just tonally all over the place. Plenty of tidy lessons are dropped about discipline, parenting, respecting your elders, morals abound here to the point that I'll be surprised if home video releases don't take a cue from the Veggietales movies and have a blurb declaring "A Lesson In Respect" on the cover. At the same time, this newest Madea film also wants very much to be a conventional PG-13 American comedy, so plenty of jokes about medicinal marijuana, urine and sex abound throughout the movie. In fact, the last scene of this motion picture primarily consists of jokes all about prison rape.

Perhaps a better filmmaker could have made the co-existence between schmaltzy moralizing and ribald humor work, but since Tyler Perry just seems to be on auto-pilot here in his various duties as writer/director/leading actor, there's nowhere near enough effort being put forth to make the schizophrenic tone of Boo! A Madea Halloween remotely work. Plus, and this is a big thing for me personally when it comes to comedies, the jokes aren't funny whatsoever. None of the actors have good comic timing, particularly the three major characters Perry plays in the movie, none of those individuals bounce off each other well at all, there is no disguising the obvious that they filmed all their scenes separately.

Now, of course, lots of comedic actors can play multiple roles that directly interact with each other and still be funny (just look at Mike Myers in the first Austin Powers movie) but like I said before, Perry is obviously sleep-walking through this film, he's got about as much energy in his screen presence as some briefly appearing zombies. He can't make any of his multiple roles bounce off each other well nor have them work well on their own terms. This may be my first Madea movie, but I gotta say, the tepid and bereft of laughs Boo! A Madea Halloween makes me think I haven't been missing all that much.
Posted by Douglas Laman (NerdInTheBasement) at 4:12 PM