I Spy, With My Little Eye, A Subpar Comedy Entitled Keeping Up With The Joneses 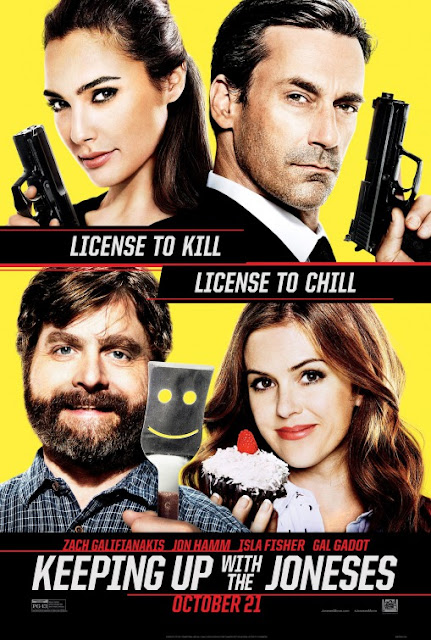 With James Bond and Jason Bourne being more popular than ever in the 21st century, not to mention Austin Powers becoming a pop culture phenomenon in the last few years of the 20th century, spies have been prime fodder for American comedies in the past decade or so. But man, the last five years have put the pedal to the metal when it comes to spy comedies, ranging from family comedies (Cars 2, Despicable Me 2 and Penguins Of Madagascar), action-comedies (The Man From U.N.C.L.E. and Kingsman: The Secret Service) and general comedies (Spy, Central Intelligence and The Brothers Grimsby all come out in a 54 week span). And now there's Keeping Up With The Joneses, whose greatest accomplishment is ensuring that The Brothers Grimsby isn't the worst spy comedy of 2016.

Jeff (Zach Galifianakis) lives a simple life as an HR manager whose peppy and has a knack for understanding people. He and his wife, Karen (Isla Fisher) are living a cozy life in suburbia and it looks like Tim Jones (Jon Hamm) and Natalie Jones (Gal Godot) are looking to also live this sort of life now that they've moved into the neighborhood. Jeff immediately tries to spark up a friendship with Tim while Karen has some suspicions about these overly perfect new neighbors. Turns out, her fears are reasonable since the Joneses are actually super-spies who have been keeping close tabs on the company Jeff works for.

It's easy to see how someone could come up with the premise for Keeping Up With The Joneses. I can already see some circa-1920's executive chomping on a cigar and going "What if we juxtaposed a normal suburban couple with Jason Bourne? It'd be a big o'l hit I tells ya!" And yeah, that could indeed be a very funny movie. Really, any concept or storyline could work into a successful movie if executed properly. Keeping Up With The Joneses obviously bungles the execution of its premise in a myriad of ways, but it's actually quite odd that more isn't done with the individual couples trying to adjust to newfound worlds.

The Joneses equip themselves quite easily to the rules of suburbia, with only Karen's high-end dresses drawing ire from the neighbors. Jeff and Karen find themselves more out of their element in the spy stuff but even then either Tim and Natalie aren't far behind to lend much-needed support or they manage to abruptly be just component long enough to do the right thing. There's plenty of comedy to be mined from having normal people plopped into the realm of espionage as recent films like Spy and Central Intelligence showed or vice vera, so why isn't this movie taking advantage of all that comedic potential? It's impossible to put out of one's mind how many opportunities for jokes the film is blowing right past considering how every gag that ends up on-screen isn't just unfunny but sends out an unintentionally awkward vibe in its failure.

There's no doubt in my mind that the discernable lack of chemistry between the film's two leading couples is a key component of why many of the jokes just don't click and also why any attempt at schmaltzy sentimentality fails to register. On their own individual merits, the various actors trapped in this mess fare no better. Zach Galifianakis has one note to play in the movie (high-strung) and nothing else to do, while my only takeaway from Jon Hamm here is that he looked particularly sickly in this movie. Seriously, was he ok when they were filming this movie because he always looked kind of feverish. Isla Fisher and Gal Godot don't have anywhere near as much to do as their spouses so they're mostly just around.

Practically a co-star unto itself in Keeping Up With The Joneses is any source of natural light, which always is so overly bright that it distracts from the already tedious dialogue occurring in any given scene. What kind of visual move was that? Similarly dumb is the decision to reveal early on that The Joneses are explicitly shady by showing Tim break into the place where Jeff works with Natalie's assistance. Well, now we the viewer know that these two aren't what they seem, but Jeff and Karen (who are otherwise the audience POV characters) are gonna still be going round and round in circles for numerous scenes afterward wondering if the Joneses are who they say they are. Now there's no tension in the film, our main characters come off as more dumb than endearing and there are no fun jokes to speak of. Honestly, you're bound to find more painful boredom than any sort of actual levity in Keeping Up With The Joneses.
Posted by Douglas Laman (NerdInTheBasement) at 9:35 AM