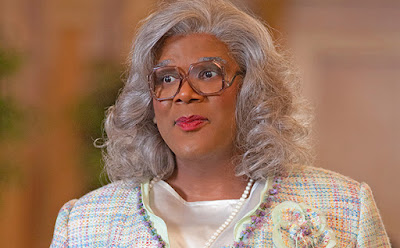 First of all, I wanted to make a thorough apology for something that appeared in last week's box office article written by yours truly. I inadvertently used a terrible awful racial slur in the headline of last week's box office round-up article and from the bottom of my heart, I want to say I am so very sorry.  While I had no clue that the word itself was a racial slur when I used it initially, that's no excuse for the ignorance my article spread and I shall be more diligent about such things in the future. Again, my most sincere apologies to everyone, I assure you, it won't happen again.

Anywho, let's look at this weekend's box office, which was a quite one as studios prepare for the holiday season to kick off with Doctor Strange and Trolls this Friday. Winning the box office for the second weekend in a row was Madea, with her newest movie, Boo! A Madea Halloween, grossing another $16.6 million, only 41% below the movies opening weekend, a way better second-weekend decline than past Madea movies. Boo! A Madea Halloween has now taken in $51.9 million, a fantastic 10-day sum.

In second place was Inferno, which became the umpteenth sequel this year that audiences thoroughly rejected. Inferno grossed only $15 million in its entire opening weekend, about 9% less than solely the opening day of Angels & Demons and 48% less than just the opening day of The Da Vinci Code. For Tom Hanks, this is his nineteenth biggest opening weekend ever, narrowly behind the significantly cheaper non-sequel Bridge Of Spies from last October. At least the $75 million budget of Inferno meant it was significantly cheaper than its predecessors and it's been doing decent business overseas, though it's pretty apparent that this is the end of Robert Langdon and his globe-trotting adventures on the big screen.

Jack Reacher: Never Go Back grossed $9.5 million this weekend, a 58% decline from last weekend that brings its domestic total to only $39.6 million in ten days. With intense competition from Doctor Strange and Hacksaw Ridge next weekend, it'd be shocking if this one got past $60 million domestically. The Accountant held far better in its third frame, grossing $8.4 million, a 38% dip from last weekend. Ben Affleck's action/comedy has now made $61.2 million in 17 days and appears to be heading for a total in the neighborhood of $80-85 million, a solid sum for the motion picture. Rounding out the top five was Ouija: Origin Of Evil, which grossed only $7 million, a 50% decline from last weekend, bringing its domestic cume to a disappointing $24.6 million in ten days.

Last weekends big dud, Keeping Up With The Joneses actually had a solid second-weekend hold this frame, losing only 38% to add $3.3 million to its meager domestic cume that now stands at $10.7 million. Joneses may just creep past $15 million domestically. Rounding out the top ten was Ae Dil Hai Mushkil, a feature hailing from India that grossed $2.1 million at 232 theaters for a per-theater average of $7,070, the second best per-theater average of any film in the top 12, only behind Boo! A Madea Halloween.

Moonlight continued to do strong business in its second weekend of limited release, expanding to 36 theaters to gross $900,826 for a per-theater average of $25,023. This Barry Jenkins movie is looking to expand into more theaters this coming weekend and it appears there's no stopping this indie box office sensation. On the opposite end of the box office success spectrum was box office dud I'm Not Ashamed, which lost 52% this weekend to add only $440,000 to its domestic gross in its second weekend. Finally, Certain Women expanded into 90 theaters this weekend to gross another $202,500, bringing its domestic cume to $486,275.

The top 12  movies this weekend grossed a total of $77 million, up about 13% from this same weekend last year when The Martian ruled the box office one last time.
Posted by Douglas Laman (NerdInTheBasement) at 11:54 AM