Apocalypse Was An Unstoppable Foe For The Newest X-Men Movie, But For All The Wrong Reasons 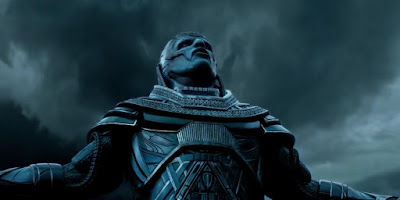 MASSIVE SPOILERS FOR X-MEN: APOCALYPSE AND ALL OF THE X-MEN MOVIES FOLLOW

Lots and lots of things went awry in this past summer's X-Men: Apocalypse, which just came out on Blu-Ray this past Tuesday and re-ignited my brain with memories of all of that features failings. Too many extraneous characters to count (Quicksilver, Psylocke and Rose Byrne's character had nothing to contribute) and tepid action scenes that looked so cheap and fake they wouldn't pass muster in a particularly poor episode of Agents Of S.H.I.E.L.D. Some movies that go off the rails feel like they could have been salvaged at one point or another, but honestly, X-Men: Apocalypse doomed itself the moment the current creative team behind these X-Men films decided to tackle the titular antagonist.


The majority of these X-Men movies are pretty grounded affairs, despite starring people with metal claws and other individuals adorned with blue skin. For the first X-Men movie way back in 2000, that seemed like a conscious decision to distance that movie from the then most recent comic book film, Batman & Robin, which had received worldwide disdain for its stylized nature. Out were the yellow spandex and in went ugly leather uniforms. But y'know, despite ditching those awesome costumes the X-Men wore in the comics, the first two live-action X-Men movies are pretty good stuff, particularly X2. They're certainly not on par with The Dark Knight, The Avengers, Hellboy 2, the first two Sam Raimi Spider-Man movies or the Captain America sequels as the best the comic book movie subgenre has to offer, but they work on their own and manage to tap into some interesting themes.

Because of the desire to distance themselves from the despised color infused realm of Batman & Robin, and also because of major budgetary restrictions, director Bryan Singer kept things in these first two X-Men movies firmly in the territory of "grounded" and "realistic". While other filmmakers like Matthew Vaughn and Tim Miller would come into the world of mutants and offer more stylized efforts (and those yellow costumes that always look awesome in live-action!), Bryan Singer has taken the reins on the last two main X-Men movies, Days Of Future Past and Apocalypse.

Both entries in the saga incorporate more fantastical elements that were largely absent from Singer's first two efforts in the X-Men franchise, but for Days Of Future Past, the primary heightened creation, the massive robotic Sentinels, basically get one scene dedicated to them dishing out anti-mutant carnage at the start of the movie. The rest of Days Of Future Past concentrates on substantially smaller-scale character conflicts. And that's great! That's why that film works! It's actually a nice way to bridge the gap between Singer's more restrained template from X-Men and X2 and the more over-the-top elements from the X-Men comics. It doesn't hurt that the character-related stuff in Days Of Future Past is really top-notch, particularly a conversation between old and young Xavier and the film's climax, which doesn't revolve around endless CGI battles but rather Xavier giving Mystique the chance to turn things around for mutant-kind forever.

Ah,  but just like Icarus flying too close to the sun, Bryan Singer and co. decided the next X-Men movie should go even bigger than Days Of Future Past instead of building on the characterization that occurred in that 2014 X-Men movie.

Out goes any semblance of character-related stuff in the script (leaving newbie mutant Cyclops with even less depth than he had in the original X-Men trilogy, a truly remarkable, in all the wrong ways, accomplishment) and in comes an endless barrage of characters that add nothing to the plot and are only around to engage in poorly done action scenes. Big cities go boom, Magneto moves continents with his mind, there's no emotional underpinning for any of this chaos and by the end I wanted to doze off. This whole movie is like the result of someone wishing on a Monkey Paw that they wanted Bryan Singer to make a more comic book faithful X-Men movie.

Honestly, the whole problem with X-Men: Apocalypse can be summed up by noting how the other Bryan Singer X-Men movies thrived on character and this one just wants to get by on uninteresting spectacle. Before, Bryan Singer and co. seemed to realize their disinterest in the more comic booky elements of the X-Men universe and just decided to focus on the character dynamics and the subtext of persecetuion in these mutants instead. That's a great decision! Realize your own weakness and then embrace what you do well! That's how you get movies like X-Men: Days Of Future Past!

But nope, now we have Apocalypse, a bad guy whose evil plan and motivation seem to be in a close race to see who can be more nonsensical. There's nothing interesting going on with Apocalypse and his power set is even boring (his grand evil move is that he can....push people into walls....the horror, The horror!), so there's not even some neat visuals to distract one from the grating lack of depth. And then there's the aggravating storytelling flaw that making Apocalypse the bad guy in a story where characters like Cyclops and Jean Grey are going into their first battle is an absolutely terrible idea. That's like having Harry Potter go through The Battle Of Hogwarts in Harry Potter And The Sorcerer's Stone! Younger versions of Cyclops and Jean Grey should battle smaller-scale bad guys at first and then have some build up to facing off against a foe like Ronan The Accuser...er, Apocalypse.

But to notice a blatant character-related flaw in the basic premise of X-Men: Apocalypse would be to harken back to the storytelling methods that marked Bryan Singer's earlier mutant-centric movies. The main agenda from a storytelling perspective this go-around was clearly to shove as much crap into the movie as possible, which results in stuff like that terrible Quicksilver scene. That's not what the best X-Men movies stand for though, the highest-quality entries in this saga emphasize interesting characters and storytelling over pointless and empty grandeur. Bryan Singer doesn't have a perfect track record with these movies even before Apocaylpse came around (remember how little Storm, Jean Grey and Cyclops had to do in that first X-Men movie?), but Apocalypse is just such a poor fit for Bryan Singer's aesthetic and prior approach to the X-Men franchise that it staggers the mind. I'm sure a better writer/director/creative team could have made this character work, but here, it feels like Brya Singer is just flailing around, constantly unsure of how the hell any of this more over-the-top material is supposed to function and just throwing explosions and mayhem on-screen to see what might possible maybe hopefully work. But hey, at least the X-Men didn't stop Apocalypse by invoking the name of his mother. What kind of idiotic superhero movie would try that kind of idiocy?
Posted by Douglas Laman (NerdInTheBasement) at 3:21 PM