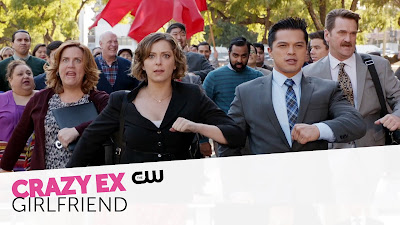 Yes, this one's a tiny bit of a cheat since it covers two songs instead of the typical one, but whatever. Anywho, both of these musical numbers come during a storyline wherein Rebecca's (Rachel Bloom) newest way of garnering extended periods of time with Josh (Vincent Rodriguez III) is to help spearhead a lawsuit against his apartment complex regarding the faulty plumbing system that is making showers a chilly nightmare for Josh and numerous other individuals. It's the kind of storyline that expertly combines numerous facets of Rebecca's complex personality, namely her infatuation with Josh, her desire to be seen as a good person who crusades for the little guy and the legitimate talent she carries in her profession.

What's also notable about both musical numbers is how they manage to pay homage to two of the most high-profile musicals in history in a naturalistic way. First off, Cold Shower is a clear homage to Ya Got Trouble from The Music Man, with both songs depicting the lead characters of the programs they belong to telling hordes of everyday people of a problem hiding in plain sight in their society while both protagonists belting out these tunes have ulterior motives for bringing such a crisis to everyone's attention. Lead singer Rachel Bloom also does a clever vocal trick of making their delivery of the various lines in this song channel the "Ya gonna give me what I wants see"-type rhythm of dialogue that existed in the original Ya Got Trouble song, which is both a nice way to homage the past and sells the underlying conniving nature of her proposal.

And how exactly does Rebecca convince the various residents of this apartment complex that overly cold showers is a dangerous problem? Why by saying that cold showers inevitably lead to crack of course! It's an absurd notion obviously, but it does appeal to people's concern over their children that can lead people to believe any crazy o'l hogwash (just look at the anti-vaccine movement!) Yes, the idea of cold showers leading your poor children to high-risk drugs is a prospect so horrifying that it leads to Rebecca's proposal gaining steam and a myriad of supporters, which leads to the companion songs to Cold Shower, Flooded With Justice.

Now, whereas Cold Shower a parody of The Music Man, Flooded With Justice sets its sights on another famous musical, Les Miserables. Yes, the musical adaptation of that Victor Hugo novel is what Crazy Ex-Girlfriend chooses to satirize next with Flooded With Justice, an an obvious pastiche on Do You Hear The People Sing? While choosing to make a parody of this particular musical number makes for a prime opportunity for Crazy Ex-Girlfriend to pay homage to one of the most famous musicals, like the choice to parody Ya Got Trouble from The Music Man, there's a greater significance to the plot for why this particular song was chosen.

Do You Hear The People Sing? is all about swathes of people coming together to speak against injustice and using it as the jumping-off point for Flooded With Justice means we get a great opportunity to see just how wide-reaching and resonant Rebecca's lawsuit against faulty plumbing has become. Plus, it allows for a non-sequiter involving the actual B.J. Novak and that's just hillarious, plain and simple. Between these two musical numbers, one can clearly see how Crazy Ex-Girlfriend's homages to the past manage to illuminate the strong musical-based storytelling its presenting in the here and now.
Posted by Douglas Laman (NerdInTheBasement) at 3:18 PM