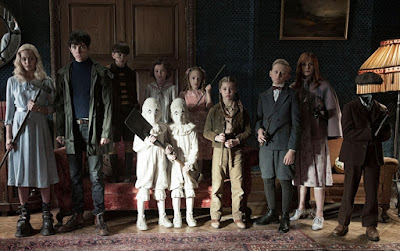 One month of fall came to an end this weekend as another month began, an occasion that was timed to the release of three new wide releases and the notable expansion of another title into over 1,000 theaters. Nothing really managed to break out though and that includes the top title at the box office, Miss Peregrine's Home For Peculiar Children, which grossed $28.5 million in its opening weekend. In terms of Young-Adult Book Adaptations, that's ahead of star Asa Butterfield's 2013 feature Ender's Game and just behind the third Divergent movie, Ascendant, from earlier this year. In terms of Tim Burton directorial efforts, it's actually his eighth biggest opening weekend ever, only slightly behind the bows of Dark Shadows and Sleepy Hollow.


This is a decent bow for a movie that didn't have an outrageous pricetag (it cost $110 million), but how come it didn't go higher? Well, the marketing made it look derivative of films like X-Men, Tim Burton is nowhere near as alluring as he used to be, the book it's based on isn't as famous as Twilight or Harry Potter, take your pick, adult audiences were busy galloping with The Magnificent Seven or going to Deepwater Horizon, take your pick. There won't be much competition for Peregrine and her peculiars in October, so it wouldn't be shocking to see this have stamina at the box office similar to Fox's other YA-book adaptation released in September, the first Maze Runner, which would lead Peregrine to an over $80 million total domestically, an alright sum for the film that would make it the seventh biggest Tim Burton film ever domestically. It's larger than expected increase on Saturday could point to its audience being more family-oriented than expected and family movies do tend to have better multiples at the box office.

In second place was Deepwater Horizon, which grossed $20.6 million, which puts it slightly above the $20.2 million bow of the far cheaper Pain & Gain when looking at opening weekends for Mark Wahlberg movies. It's a decent bow that I'm surprised didn't go higher; it's lower than the majority of the opening weekends for Mark Wahlberg led films that aren't the only two films that debuted to under $10 million, The Gambler and Broken City. Otherwise, the guy's pretty consistent with delivering solid opening weekends, and while Deepwater Horizon is by no means a "dud, I'm sure Summit/Lionsgate were hoping it would open a tad higher given its immense $110 million budget. How Deepwater Horizon holds up in the next few weeks remains to be seen considering there's a few adult-skewing titles like The Accountant that could cut into its business big time.

Last weekend's new releases continued to putter along, with The Magnificent Seven coming in at third place with $15.7 million, a 55% decline which is a larger second-weekend dip than the 45% decline of the last Denzel Washington action film released in late September, The Equalizer. The Magnifcent Seven has now taken in $61.6 million and should be able to get past $100 million in its domestic run.  Storks lost 31% this weekend to add $13.8 million to its cume, a second-weekend dip that's on par with the one seen by Hotel Transylvania  2 in this same weekend last year. Even with that strong weekend-to-weekend decline, Storks still has a ways to go before it's profitable with an underwhelming $38 million cume in its first ten days. Rounding out the top five was Sully, which had another solid weekend-to-weekend decline of 37% that gave it another $8.4 million that brought its domestic cume past $100 million to $105.3 million, to be precise. This the nineteenth movie Tom Hanks has starred in over the past 28 years that has managed to gross over $100 million domestically, an incredible achievement.

After a whopping 13 month delay stemming from the bankruptcy of its distributor, Relativity Media, Masterminds finally debuted to dismal numbers, grossing only $6.6 million in its opening weekend. That gives Masterminds the fourteenth worst opening weekend ever for a motion picture debuting in over 3,000 locations and for leading man Zach Galifianakis is one of his worst opening weekends ever, opening beneath the 2010 Michael Cera comedy Youth In Revolt that he only had a supporting turn in and there's only two movies he's appeared in (Out Cold and It's Kind Of A Funny Story) that had worse wide release opening weekends. Between this and the flat-out failure of The Disappointments Room, the rebooted version of Relativity Media is off to a disastrous start. Their next film, Kidnap starring Halle Berry, arrives December 2nd and it'll be interesting to see if that one can finally turn things around financially for the extremely troubled indie studio.

Don't Breathe had another excellent dip in seventh place, grossing $2.4 million (a 37% dip from last weekend) and bringing its domestic cume to a fantastic $84.8 million. Another holdover fell into eighth place, Bridget Jones's Baby, gathering up another $2.2 million (a 49% decline from last weekend) to bring its domestic gross to a disappointing $20.9 million, though at least Bridget Jones is making noticeably more cash overseas.

Right in at ninth place was Queen Of Katwe, which expanded into 1,242 theaters this weekend to only $2.1 million. one of the worst opening weekends for a wide release from Disney in eons. To boot, only four other movies this year (Morgan, The Disappointments Room, Jane Got A Gun and The Bronze) have opened in over 1,000 theaters and had worse opening weekends. While nobody ever expected Queen Of Katwe to have box office figures on par with Disney's Star Wars and Marvel films, there's also no way box office expectations for the title were at these basement level figures. Expect this one to vanish from theaters quite quickly, to the point where it will likely end its domestic run with only a little over $5 million.

This past Thursday, both Lights Out and The Jungle Book ended their domestic runs. Lights Out grossed $67.2 million, a fantastic result given its only $4.9 million budget and far far far above any expectations people had for the film. Speaking of shattering expectations, The Jungle Book also blew all projections with a massive $364 million cume that makes it the fourth biggest movie of the summer.

The Top 12 movies this weekend grossed $106.4 million, a 26% decline from the same weekend last year when The Martian blasted off to massive box office. This weekend was also down from the same frames in 2014, 2013 and 2012. It's also worth noting that September 2016 closed with a total gross of $584.4 million making it the third biggest September ever.
Posted by Douglas Laman (NerdInTheBasement) at 10:36 AM