Angels & Demons Is, At Best, Only Passable, But It's Got Way More Life In It Than Its Predeccesor 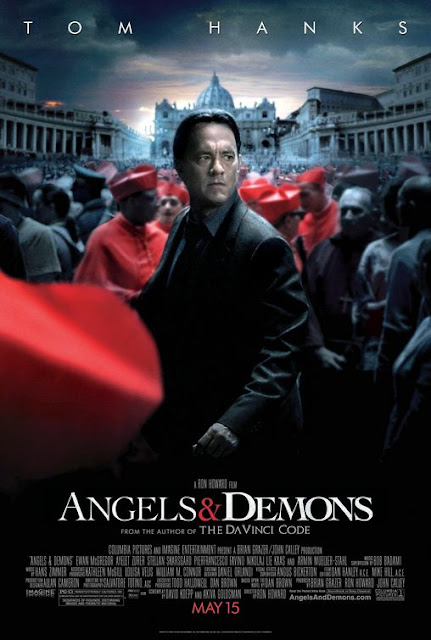 It's hard to imagine someone walking out of The Da Vinci Code in the summer of 2006 and going "Oh man, I wanna return to that universe!", though it's easy to picture vividly audiences leaving screenings of that 2006 Ron Howard film and muttering under their breaths "What was all the hype about?". And yet, Sony/Columbia was not going to be the studio that ignored the $700 million worldwide box office gross of The Da Vinci Code and respond to it with a sequel, so May 2009 brought the world Angels & Demons, a book actually published prior to The Da Vinci Code but reformatted as a sequel in its cinematic adaptation.

It looks like nobody's favorite Tom Hanks character, Robert Langdon (Tom Hanks, obviously), is embroiled in another foreign adventure heavily utilizing religious imagery, as four cardinals have been kidnapped from the Vatican just as the Pope has passed on! Now, as the decision as to who will take over as the Pope is being determined, Robert Langdon tries to find the missing priests with the help of scientist Vittoria Vetra (Ayelet Zurer). The clock is ticking for the duo as the kidnapper has promised to murder one cardinal an hour starting at 8 PM.

That's the big detail that makes Angels & Demons far more tolerable than the first Robert Langdon adventure, the stakes are incredibly more clear in this story and the presence of a bomb driven by anti-matter may provide an overtly science-fiction element that doesn't fit at all into the more grounded nature of the overall film, but at least it gives a ticking clock element to the plot that allows it to have some sort of energy. There's finally a reason for me to care about what's going on on-screen and I probably would...if the characters weren't just as poorly concocted as last time around.

Robert Langdon still just isn't that interesting of a character, coming off more like a blatant waste of Tom Hanks more than anything else. This time around, his lack of direct belief in God comes up in one or two dialogue exchanges, but it never comes up in a noteworthy way. Like The Da Vinci Code, you also have one woman in the entire movie whose got next to nothing to do in the plot and characters played so broadly in their "good" or "bad" nature that it's fairly clear the feature is attempting to play up a horribly botched attempt at misdirection.

On a more positive note in regards to changes from the first movie, things are certainly more energetic this time around, an intentional move on the productions part if a quote from producer Brian Grazer is any indication. Editing during car chases seems to be channeling the work of Tony Scott while Hans Zimmer's score heaps on music to every scene that basically screams "INTENSE STUFF IS HAPPENING!!". It's frequently more exhausting than exhilarating, but there are certainly times where this more fervent atmosphere works to the advantage of Angels & Demons.

I suppose this all means Angels & Demons falls into the type of sequel that manages to outdo its predecessor. That's far more impressive when you're something like The Empire Strikes Back or The Dark Knight where the first film was a top-notch movie too and like here where The Da Vinci Code was a total snooze of a film. Angels & Demons still can't overcome a number of the issues that plagued its predecessor, namely the fact that Robert Langdon is a dreadfully boring protagonist to set all of these supposedly exciting movies around. At least there's more clarity in the script this time around which at least keeps things watchable more often than not.
Posted by Douglas Laman (NerdInTheBasement) at 3:40 PM