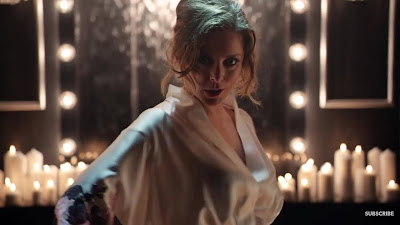 Crazy Ex-Girlfriend returns to The CW Friday night, and in honor of its return, I've decided to do a column each weekday this week chronicling noteworthy songs from the first season. First up....

The practice of women taking elongated amounts of time to prepare for going out has been the butt of jokes for ages, typically in the form of shallow jabs consisting solely of dudes asking "Why are women so slow?!??! LOLZ!" Leave it to Rachel Bloom to add some humanity to this endeavor from the perspective of the gender that actually goes through the extended rituals to match societies narrow vision of what constitutes beauty. This is The Sexy Getting Ready Song, a tune that dropped in the middle of the first episode of Crazy Ex-Girlfriend and established right off the bat that this would be program that explored concepts and ideas not frequently seen on American television.

Like so many of the songs on this show, it cannot be overstated how freaking funny, in addition to being introspective, the lyrics are. The high-level of production quality seen in the musical number for this, as well as Rachel Bloom's exceptional vocals, being juxtaposed against lyrics that have a chorus cooing "ASS BLOOD!" is just wonderful all around. And then there's the moment where Rachel Bloom says "Now let's see how the guys get ready" and then hard-cutting to Santino Fontana snoozing on the couch. Again, priceless priceless.

Let me go back to a point I touched on early on in my second paragraph though, the high-level of production quality in the sets, cinematography and choreography in this sequence. While a number of the songs on the show are obvious pastiches on numerous types of genres or specific artists, the various visual depictions of said songs on the TV show proper have numerous visual facets that either help lean into the origin source that the tune is parodying/homaging/etc. as well as just providing yuks on their own merits. Here, you get a number of just humorous visuals like a lady playing a violin in a tub as well as Rachel Bloom attempting to dance in the background in a tub while a rapper (Whose life will be forever changed by this song) begins to drop his rhymes.

Like the songs of Weird Al Yankovich, the tunes of Crazy Ex-Girlfriend work perfectly well as their own separate entities but when given visual accompaniment (for Weird Al that comes in the forms of music videos while for Crazy Ex-Girlfriend it is in the form of the way the songs are performed within various episodes of the show) another layer of humor is added to an already scrumptiously hilarious entree. The level of apparent craftsmanship that goes into the various performances of the myriad of musical numbers that crop up on Crazy Ex-Girlfriend pay off in dividends both in terms of the themes these tunes present as well as the countless jokes the show manages to squeeze into a singular 2-3 minute long musical number.

We can't forget too how this musical number debuted in the very first episode of Crazy Ex-Girlfriend, a bold move that showcased the unique format of the program as well as the type of comedy they'd be doing through this first season. Nothing was being left on the table here and it's yet another example of how, from the very start, this show had a drive to embrace its own unique nature and provide laughs and thoughtful insight in equal measure. That's a pairing the show's kept going throughout its first season and it all got started thanks to a brillaint creation entitled The Sexy Getting Ready Song.
Posted by Douglas Laman (NerdInTheBasement) at 8:57 AM