The Da Vinci Code Is The Worst Kind Of Nonsense...Boring Nonsense 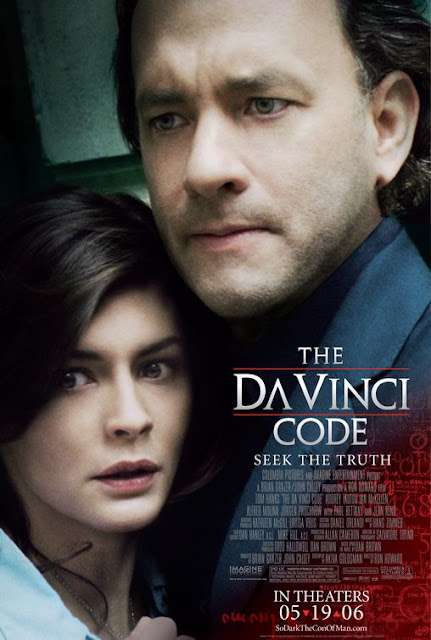 At the dawn of the 21st century, The Da Vinci Code was everywhere. That 2003 Dan Brown novel was pervasive in its presence and it was only a matter of time before a feature film adaptation. And who better to handle such an adaptation than recent Best Director Oscar winner Ron Howard who was also coming off the biggest movie of his career, How The Grinch Stol Christmas. Reunite him with Tom Hanks, his lead actor from the 1995 hit Apollo 13, and you've got a surefire recipe for a major blockbuster right?

Well, The Da Vinci Code movie certainly made bundles of cash at the box office that's for sure. In fact, it made enough money to spawn two sequels, one of which (Inferno) opens this Friday. But a decade after its release, the film itself seems to be mostly forgotten and after watching it for the first time, I can't say I'm surprised by how much it has receded away from the pop culture radar. Now, the plot of The Da Vinci Code is your typical convoluted treasure hunt movie storyline, one wherein Robert Langdon (Tom Hanks) is sucked into a hunt for the Holy Grail against some high-ranking Catholic officials who wish to take the Holy Grail for themselves and eradicate a secret society that Robert Langdon's companion Sophie (Audrye Tautou) may have some connection to via her grandfather.

What follows is a bunch of globe-trotting stuff complete with Ian McKellen as an old friend of Robert Langdon's obsessed with the Holy Grail coming along for the ride. Some double-crosses ensue, some clues seems impossible to decipher until they're not, it's all sub-standard stuff for this subgenre of storytelling. Despite the twisty-turny nature of the plot that constantly shoots out "unexpected" plot points the way a machine gun blasts out bullets, it's all rather rote and predictable, with no sense of fun or urgency seeping into our lead characters quest. Everyone just plainly shuffles along from one location to the next with someone in the cats all the while spouting out tedious expository dialogue.

Oh God, the expository dialogue. There is so much explaining going on in The Da Vinci Code about everything, from the inner working of a secret society to the importance of the Holy Grail to the importance of Mary Magdalene to Jesus Christ and it all just prattles onward forever. You know you're in trouble when even Ian McKellen's awesome voice can't make this all of this endless explaining entertaining. It's like being stuck in the most portentous lecture ever conceived, one that doesn't have the courtesy to sprinkle in the occasional dash of personality.

Worst of all, the monotonous and endless expository dialogue doesn't even help shed light on The Da Vinci Code's storyline. So much of this dreck makes no sense and critical plot points are activated by characters doing bizarre and nonsensical actions. Despite its insistence of explaining every nook and cranny of its universe, The Da Vinci Code is still far more puzzling than exhilarating. Even Tom Hanks can't make it all work. To be fair, only he could make a super poorly written ending monologue where Robert Landon recounts a time where he fell into a well as a kid feel remotely human, but for the rest of the movie he's just sort of chilling in the background until the script needs him to remember some crucial historic factoid so the plot can sort of keep moving.

It's a competently enough made movie I suppose, in that there's no really bad editing, the sets look good, though it's worth mentioning that neither director Ron Howard nor cinematographer Salvatore Totino manage to create any interesting visuals or shots to speak of despite some amazing European archetciture and locations at their disposal. But prepare to be both dumbfounded and constantly yawning at the ho-hum actions on-screen. The Da Vinci Code (boy, that title is super odd since Da Vinci plays such a minuscule part in the story proper) is pretty nonsensical cinema, though at least it's better than the other Ron Howard book adaptation from the same era, that wretched live-action Grinch movie.
Posted by Douglas Laman (NerdInTheBasement) at 2:00 PM