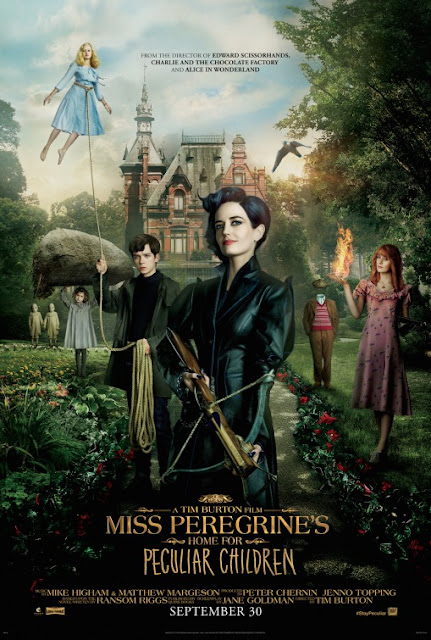 While dabbling in some weird-ish fantasy oriented imagery and having the requisite outsider protagonist that have been hallmarks of Tim Burton's work for decades now, Miss Peregrine's Home For Peculiar Children may be one of the most generic films to come from the director, right alongside that Planet Of The Apes remake he did back in 2001. Don't mistake generic inherently for "worst", Miss Peregrine is most certainly better than Charlie And The Chocolate Factory, the defensive nadir of Burton's work as a director, but it does feel like any sort of identity he usually brings with him to his work has been sanded off.

Instead, Miss Peregrine's Home For Peculiar Children resembles something a filmmaker like Chris Columbus might have churned out in that period in the late 2000's when every studio was churning out high-concept fantasy movies (like The Spiderwick Chronicles or The Seeker: The Dark Is Rising) starring teenage characters that were adaptations of book franchises in an attempt to get some of that sweet sweet Harry Potter money. This means our tale follows a normal human, Jake (Asa Butterfield), whose an outcast in the normal human world. We breeze right past the part of the story where we're supposed to really get a feel for our protagonist and his dreams, goals, personality, all that minor stuff (we get one rushed scene demonstrating Jake's an outcast by way of some jerks in his age group knocking over a display case of adult diapers at a grocery store Jake meticulously put together), instead going almost directly into Jake mourning the loss of his grandfather (Terrence Stamp).

Jake's grandad used to tell the youngster tales of a place run by Miss Peregrine (Eva Green) where children with special gifts could live in harmony. Now our leading man heads off to find this home for peculiar children and ends up discovering that not only does such a place exist, it's permanently stuck in a 24-hour loop in 1943, allowing Miss Peregrine and the children who live with her to never age a day. So, once Jake arrives at the titular location, he and the audience must be told a whole bunch of explanations involving time travel, magical powers, specific character traits and personalities and there's also a bunch of squid monsters after the eyeballs of peculiar children. Plus, there's a weird vibe of "Things aren't as they seem" for much of the middle of the story involving Miss Peregrine keeping seemingly vital information from Jake that concludes with a bizarre fizzle.

It's fairly clear that a lot if happening in Miss Peregrin's Home For Peculiar Children, but the whirlwind of information dumped on the audience doesn't really amount to all that much, particularly in the way of the characters (none of the peculiar youngsters who stay at this school leave much of a mark) nor is any of the exposition told to both Jake and the viewer in an interesting way. It feels like the entire movie is just spinning its wheels and waiting until the climax arrives. Granted, the finale of the feature is the best part, no question, since a delightfully hammy Samuel L. Jackson arrives as an eyeball gobbling monster who detests Florida.

Samuel L. Jackson is the kind of actor whose always got enough energy to make it seem like he's a firecracker that's just been lit in the lion's share of his roles, He makes for a menacing enough foe in his limited but enjoyable screentime and the section of the story he appears in, the ending, also offers the chance for the various "peculiar children" to use their various special abilities to take down some nefarious adults, which is also the sort of fun the rest of the movie could desperately use since the rest of it is just ho-hum. This is especially true of Asa Butterfield in the lead role of Jake, a part that seemed to be trying to be, in the realm of"everyman-caught-up-in-a-daunting-situation" characters, like Luke Skywalker, but instead is more along the lines of that whiny thief Brenton Thwaites played in Gods Of Egypt. At least Jake is more interesting than some peculiar and constantly agitated individual he encounters named Enoch (Finlay MacMillan), who holds a pervasive grudge against newbie Jake and comes off like a serious version of the archetype that Chris Roth was a dead-on parody of in Team America: World Police.

I'll freely admit to being shocked that Bruno Delbonnel was the one in charge of the cinematography for this project, considering how excellent his work was on Inside Llewyn Davis. That is most certainly not how I'd describe the look of Miss Peregrine's Home For Peculiar Children, which carries a flat and uninteresting visual look that struck me as more like something straight out of a subpar Cartoon Network TV movie. The color choices are mostly uninteresting while a number of scenes set in the present are given that obnoxious blue color grading tint that I just can't escape from in recent movies. Boy, when even the sets and costumes in a Tim Burton are blah, you know something's gone awry. Aside from a solidly fun climax, if only even a tenth of the kind of boldness that marked better Tim Burton films like Edward Scissorhands or Big Fish was around in Miss Peregrine's Home For Peculiar Children. maybe it could have lived up to its full potential. Or at least it couldn't have wasted Chris O'Dowd (who gets to done an American accent here, which is super weird to hear) and the crimianlly underrated Eva Green, I'd also have settled for that!
Posted by Douglas Laman (NerdInTheBasement) at 8:51 AM