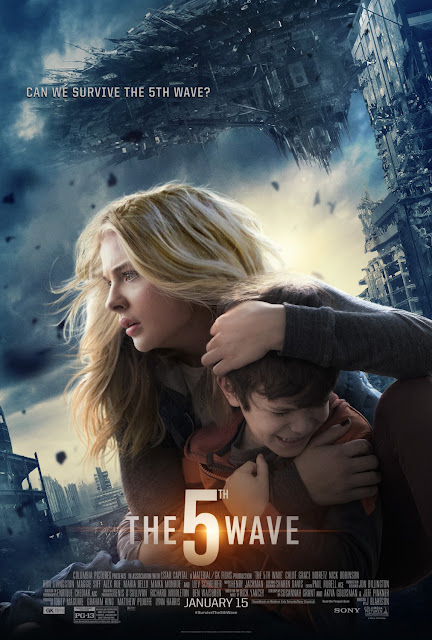 So much idiocy is crammed into the running time of The 5th Wave that I wondered at the end what screenwriter could possibly be responsible for this disaster. Then I saw in the credits that none other than Akiva Goldsman was one of the three credited screenwriters. Now it all made sense. Of course the man responsible for Batman Forever and Insurgent would be in charge of this project. Clarity washed over my body and suddenly the reason for why this project had gone so horribly off the rails was clear as day, though the script is far from the only thing that simply doesn't work in any way shape or form in The 5th Wave, believe you me.

Aliens have come to Earth and have begun to wipe out the human populace via various attacks that eliminate human beings in great numbers. Each of these attacks are referred to as "waves" and soon the human race has been greatly reduced in numbers. Cassie Sullivan (Chloe Grace Moretz) and her father and younger brother, Sam (Zackary Arthur) are trying to make it in this post-apocalyptic future when, all of a sudden, Cassie is separated from her brother and her father is killed. Now Cassie must spend the majority of the running time wandering through the woods in an attempt to get to her younger brother whose at a military base. Along the way, Cassie has fun misadventures like killing an innocent unarmed man at a gas station and losing her virginity to a hunky woodcutter.

Once Cassie and Sam are separated, much of the plot simultaneously also follow Sam as he's recruited for...a child army that's being taught to become kill-loving soldiers in order to fight off an impending attack by the aliens. You'd think the main focus of these segments would be Sam, but nope, it's actually a guy nicknamed Zombie (Nick Robinson) that Cassie used to have a crush on. Sam makes brief appearances throughout this plot making the child soldier segments feel extremely disconnected from the sequences where Cassie is romping through the wilderness. And also the child soldier stuff is incredibly stupid. Why are children being turned into soldiers? There seem to be plenty of adults on the military compound, why don't they just fight in this war instead of handing five-year-olds grenade launchers and the fate of humanity?

I didn't understand a damn thing about this movies limp excuse of a plot and I doubt director J Blakeson (whose lack of skill behind the camera and his unusually brief first name has led me to assume he's related to McG) really cared all that much about the coherency of the script he was directing. He seems to be going through the motions as a filmmaker here, with much of the feature looking super cheap and, while we're on the subject of visuals, it's worth noting that one particular set where the kid soldiers train looks eerily similar to the place where the Dauntless faction train in the first Divergent movie. Coincidence? Evidence of an Illuminati conspiracy? Laziness? Who even cares anymore, I sure don't.

Chloe Grace Moretz is our leading lady here and it's one of the more tepid performances I've seen her give, though at least she registers more than one emotion on her face during the film which cannot be said of her male co-stars Nick Robinson and Alex Roe, the latter actor playing the aforementioned hunky woodcutter. Nick Robinson reveals that the far-away gaze he carried throughout Jurassic World was not a trait he adopted just for that 2015 film while Roe seems to be in a perpetual state of seemingly trying to come to terms with the idea that his mouth is capable of pronouncing syllables. Seriously, Alex Roe has got some dismal line readings in this movie, though I do feel sorry for him since I doubt anyone could make this films abysmal dialogue work. And then there's poor Liev Schrieber, Maria Bello, Maika Monroe (I had no clue she was even in this thing until the closing credits) and poor poor Tony Revelori are also dragged down into this mess.

It's a real shame a bunch of good actors got sucked into the vortex of awfulness that is this motion picture, though the good news at least is that, thanks to this movie's poor box office, none of them will have to come back for a sequel that The 5th Wave blatantly sets up in a manner that makes the cliffhanger ending of The Golden Compass look subtle in its ambitions by comparisons. Silver linings people, ya gotta look for them even in disastrous garbage like The 5th Wave, especially when said silver linings promise that we will never see the return of Hunky Woodcutter in movie theaters everywhere.
Posted by Douglas Laman (NerdInTheBasement) at 8:58 AM