Madea Frightens Her Way To The Top Of The Box Office, Jack Reacher Does Alright, Oujia Underwhelms And Moonlight Gets Off To Bright Start 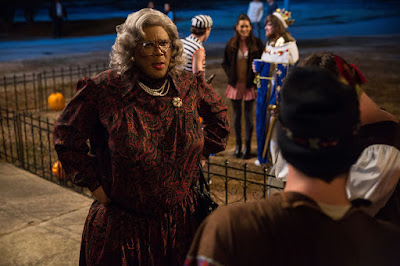 After three years away from multiplexes across the country, Madea returned to movie theaters with a strong showing in Tyler Perry's Boo! A Madea Halloween, which grossed a fantastic $27.6 million over the weekend. That's the third-best opening weekend for a Madea movie and the fourth biggest opening weekend ever for Tyler Perry as a director. It's also the first movie from Lionsgate to be the number one movie in America in 11 months. The last time that happened was with the very last Hunger Games movie.

October has shown itself to be a very fortuitous time to release a comedy with hit titles like Couple's Retreat, two Jackass films (one of them being Bad Grandpa) and certain movies designed to take advantage of their Halloween release dates like Scary Movie 3. Boo! A Madea Halloween was obviously looking to take advantage of the Halloween holiday and considering the impressive financial consistency of the Madea films (all 6 past entries in this series have exceeded $50 million domestically), it's no shocker this one managed to over-perform.

In second place was Jack Reacher: Never Go Back, which performed only OK with a $23 million bow. That's considerably above the $15.2 million bow of the first Jack Reacher movie, but that one opened in the Christmas timeframe where movies stick around longer. The same cannot be said for the late October timeframe, particularly this year where Jack Reacher will have to compete with Inferno and Doctor Strange over the next two weeks. In terms of Tom Cruise's opening weekends, it's his 16th biggest opening weekend, just behind the $24.2 million bow of The Last Samurai and just above the $21.7 million debut of Eyes Wide Shut. This new Jack Reacher movie will likely end its domestic run around $55 million, which, considering the likely strong foreign box office (Tom Cruise always does well overseas) and $60 million budget, isn't bad, but Paramount was likely hoping for more from Tom Cruise's first ever non-Mission: Impossible sequel.

Ouija: Origin Of Evil came in at third place this weekend, grossing only $14 million, down about 26% from the opening of the first Ouija movie. Its predecessor didn't exactly garner the best reception, so it's no shocker that another Oujia movie didn't exactly strike like a wildfire with general audiences despite some strong reviews. This one will likely hold slightly better than usual for horror fare only because of the impending Halloween holiday, but it'd be shocking if this got above $35 million domestically.

Despite the presence of new action movie Jack Reacher, The Accountant held decently in its second weekend, going down only 43% to add $14 million to its domestic cume that now stands at $47.9 million. Not too shabby, not too shabby at all. Looks like this one will possibly end its domestic run in the vicinity of $75-80 million. Rounding out the top five was The Girl On The Train, which grossed $7.39 million, a solid 40% decline from last weekend. Emily Blunt's train-based thriller has now grossed $59 million domestically. Miss Peregrine's Home For Peculiar Children actually had a really stand-out dip this weekend going down only 29% to gross another $6.3 million. Tim Burton's latest motion picture has now grossed $74.9 million domestically and, combined with strong foreign grosses, is turning into a tidy hit for the filmmaker.

In seventh place was Keeping Up With The Joneses, which pretty much clinched the idea that this has not been the best four weeks for Mr. Zach Galifiankis. Joneses only grossed $5.6 million in its opening weekend, the tenth worst opening weekend ever for a movie opening in over 3,000 theaters.  It's not exactly a shock this one failed to drum up much interest considering its lackluster marketing campaign and the fact that it faced formidable comedic competition from comedy sequel Boo! A Madea Halloween.

Kevin Hart: What Now? felt the brunt of the presence of two new comedies in the marketplace by plummeting 65% in its second weekend of release, adding $4.1 million to a domestic take that now stands at $18.9 million, making it now the 6th biggest stand-up comedy concert film of all-time. Storks, on the other hand, held quite well, in its fifth weekend of release, grossing $4 million (a 28% dip from last weekend) to bring its domestic gross to $64.7 million.

All the way down in sixteenth place was I'm Not Ashamed, which had a dismal opening weekend of $900,000. Chalk this one up as yet another loss for Pure Flix in 2016, a year that has not been kind to the small Faith-based studio with God's Not Dead 2 and Hillsong: Let Hope Rise also becoming notable box office duds. Just behind I'm Not Ashamed was Max Steel in its second weekend of release, grossing only $659,126 to bring its abysmal domestic cume to only $3.4 million.

There were actually a few titles of note debuting in limited release this weekend, one of which was the critically savaged American Pastoral, which grossed $151,000 at 50 locations for a per-theater average of $3,020. The original plan was to expand this Ewan McGregor directorial effort into wide release this coming Friday, though that's likely to be scrapped after these subpar box office results. The new Chan-wook Park movie The Handmaiden bowed to great results over the weekend, grossing $91,600 at 5 locations for a per-theater average of $18,320. Finally, Michael Moore's impromptu Trump-centered film Michael Moore in Trumpland played at two theaters for a $50,200 opening weekend.

Two 2016 titles ended their domestic runs this week, the first being War Dogs, which ended its domestic run with $43 million, making it the 2nd lowest grossing Todd Phillips directorial effort that went into wide release ever domestically. Also closing out its domestic box office run was Star Trek Beyond which grossed only $158.8 million, considerably less than the last two Star Trek movies domestically. Adjusting all of the Star Trek movies for inflation, Star Trek Beyond comes in eighth place out of thirteen movies, narrowly ahead of the attendance of Star Trek: Generations.

The Top 12 movies this weekend grossed $113.9 million, actually a nice bounce back for the Autumn 2016 box office that's been a bit slow thus far. That $113.9 million sum is about 20% above the top 12 gross from this same weekend last year when The Martian ruled the box office for the third time and also makes this the fourth biggest 43rd weekend of any given year in history.
Posted by Douglas Laman (NerdInTheBasement) at 8:39 AM