The Next Pirates Of The Caribbean Movie Has A Trailer With A Javier Bardem Ghost...And No Johnny Depp 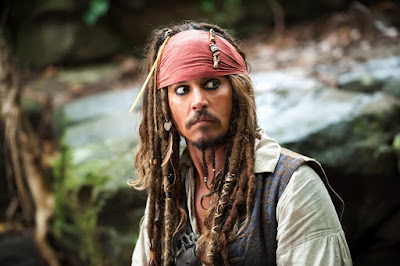 Because it worked out so well this past summer when Disney released a Johnny Depp-starring sequel to a six-year-old movie over Memorial Day, we all have Pirates Of the Caribbean: Dead Men Tell Not Tales to look forward to come May 26, 2017. This new installment basically ditches everything from that stand-alone fourth movie no one liked (though I'd assume Barbossa's peg leg will return) and brings back stuff from the original trilogy, namely Will Turn and his now grown-up son. Oh, and Johnny Depp is also back, but not that adorable dog with the keys, as far as I know. Check out the first trailer for the new Pirates movie below.

I think what irks me about this trailer most of all is how little "new" stuff it shows the audience. More undead evil pirates (how the hell has this series not found any other form of antagonists in the past 13 years?) and once again Jack Sparrow is being hunted by someone or another. Because of course Jack has to be the lead again, of course. It's totally not like the only really good movie in this saga actually had Jack in a more supporting capacity, nope, we gotta have Johnny Depp mugging at the camera for three hours because that worked in box office sensations like Mordecai.

Pardon the relentless snark, but this franchise has really pissed away all of its initial goodwill in a way only The Terminator and The Matrix really know about. Two last things I'll note about this trailer; one is that I actually like the implication in the visuals that Javier Bardem and his crew are moving on land like they're underwater, that's cool. Plus, Bardem's vocals are super cool in the teaser, won't lie about that. The other thing worth mentioning is that I was wondering over the past few months how the hell they'd market an all-ages summer blockbuster starring a newly revealed wife-beater and it turns out the way they're getting around that is by...not showing Johnny Depp in the marketing materials just yet.

Posted by Douglas Laman (NerdInTheBasement) at 9:01 AM

Email ThisBlogThis!Share to TwitterShare to FacebookShare to Pinterest
Labels: Pirates Of the Caribbean: Dead Men Tell Not Tales