The Accountant Is Plenty Watchable But Also Sort Of A Mess 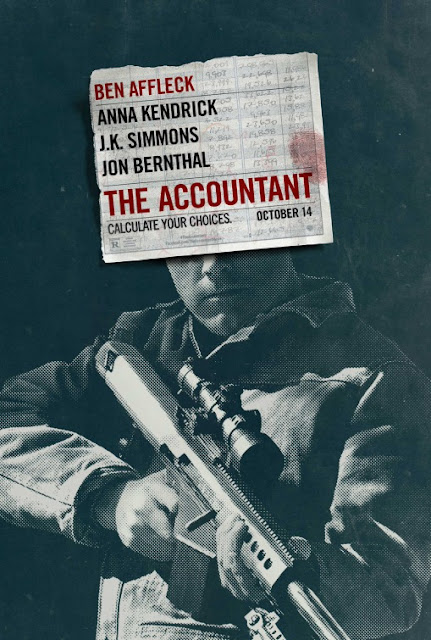 The Accountant is kind of an oddball movie. There's a lot of big actors wriggling around on-screen inhabiting a script that feels like it could have easily belonged to some sort of Steven Seagal and Charles Bronson action vehicle in the 1980's. It's an interesting dichotomy that actually makes the film watchable but it's kept from being truly as fun as it could have been by a script that seems to be hopping all over the place tonally and there's also the problem of the story being plagued by pervasive predictability.

So who is The Accountant? Well, he's Christian Wolff (Ben Affleck), a man who poses as a normal Illinois residing accountant but actually frequently cooks the books for high-ranking gangsters and criminal organizations. He's gone under many different aliases over the years and government official Ray King (J.K. Simmons) wants to know exactly who he is. He's not the only one searching for Christian Wolff though, as it appears Christian has ticked off someone powerful considering that he and work companion Dana Cummings (Anna Kendrick) are both being hunted by a ruthless assassin named Brax (Jon Bernthal).

It's worth noting that Christian Wolf has Autism and, as a person with Asperger's Syndrome on the Autistic spectrum whose seen plenty of poor representations of individuals on the Autistic spectrum in pop culture (Sheldon Cooper is a particularly dismal depiction of someone on the spectrum to the point that I want to jump into a lake every time I hear the word "Bazinga!"), I can say that with some authority and experience that, Ben Affleck's lead character in The Accountant is an alright depiction of someone on the spectrum. It's still indulging in a few too many stereotypical portrayals of people with Autism, namely that this is still a mathematical savant that's also a white dude (where is the representation of Autistic women in American pop culture??) and Ben Affleck's performance occasionally veers into feeling like he's going an over the top caricature instead of playing an actual human being. But it's a fine portrayal overall I guess and it is cool to see an Autistic person leading the show instead of being a sidekick ala Rain Man or something like that.

While the screenplay by Bill Dubuque has a decent handling of its protagonists Autism, it's got less of a firm grasp on a tone that suits the story and characters its depicting. The Accountant has more comedy than one might expect, some of it funny (anything with Anna Kendrick is a hoot), but frequently the lighter tone just does not work with the characters themselves. For instance, there's a sequence where Brax forces a dude to kill himself, with the worst thing the film can say about him being "Aw man, that rascal! What won't he do??" The father of Christian Wolff that puts his son through rigorous training exercises seems like a crazy person (because only such a person would train his son to become a stone-cold killer), but the feature plays him off as a source of inspiration.

A more introspective film could have made such characters work, but The Accountant plays things so broad that there's no room for grey areas in where the various players in the story fall. The good guys are good, the bad guys are very bad and that's that. That tonal dissonance kept ripping me right out of the movie, especially since the broad nature of the characters seeps over into the actual story structure which ensures that every "plot twist" and character-related emotional pay-off can be seen coming a mile away. Even the action scenes tend to feel derivative of the likes of John Wick, though there are some fun moments to be had here, most notably in Christian Wolff's response to an enemy pulling out a knife and some comedy juxtaposing the heightened Jason Bourne style action with Christian Wolff's no-nonsense style of communication.

Gavin O'Connor, director of the exceptional and criminally underrated 2011 feature Warrior, is the one in the director's chair here and he fares solidly as the guiding hand of this production. His experience with filming the riveting boxing scenes in Warrior seems to have prepared him for the action-heavy set pieces in The Accountant since such moments are mostly clearly shot (aside from a night-time climactic showdown which was hard to make out) and don't feel gratuitous. He does fine work here, just like the murderers row ensemble cast assembled, though I can't help but wonder if they could have all been better served by putting their efforts into a more substantive endeavor.

Posted by Douglas Laman (NerdInTheBasement) at 8:39 AM