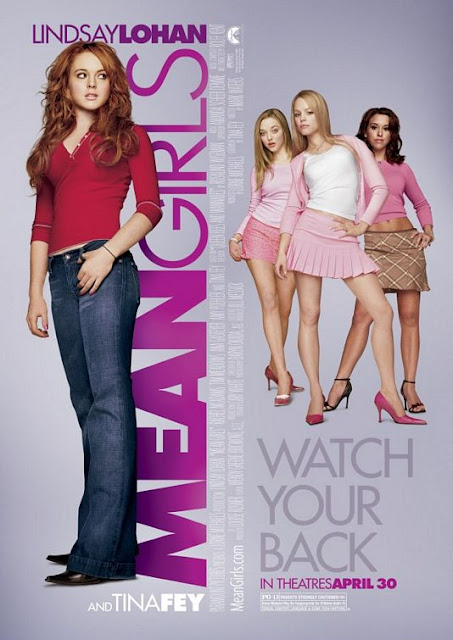 Isn't it nice when a movie kind of just knocks you off your feet in how much its quality surprises you? It's an unexpected sensation that totally happened with me after I finished watching Mean Girls for the first time yesterday. Now, it's not like I had never heard of this 2004 Mark Waters effort in the past 12 years, far from it. I knew about October 3rd being Mean Girls Day, I'd heard how fetch was "not gonna happen", the various jokes that had cemented themselves in pop culture in a way very few 21st-century comedies have. Basically, I was familiar with Mean Girls in that I'd absorbed that the film had managed to resonate with people in a certain way....and now I totally understand it.

The kind of fascinating thing about Mean Girls is the unique perspective it's filtered through. The protagonist of this story is Cady (Lindsay Lohan), a lady whose spent a large portion of her life home-schooled in Africa. She's completely unfamiliar with the traditional social ropes of High School and so being plunked into the public school system in her Junior year of High School leaves her high and dry as well as seeing the various social hang-ups of High School for what they really are; ridiculous.

Part of that ridiculousness comes from how much the school seems to worship The Plastics, a trio of ladies, led by Regina (Rachel McAdams), who seem to just spread deceit, gossip and hatred everywhere they go. They're also a faction of students who have taken a liking to Cady. Now, one of Cady's few true friends, Janis (Lizzy Caplan, one of a number of "before-they-were-big-time-actors" turns in the movie), suggests a plan for Cady to use her newfound friendship with The Plastics to take the group down...but Cady soon finds herself succumbing to the sort of nasty duplicity that she wanted to eradicate in the first place.

It's the classic "become-what-you-hate" narrative filtered through the lens of a High School movie, a setting that makes the gradual transformation of Cady into the kind of person she used to detest extremely natural. It sounds ridiculous once you actually leave the wretched place, but social status does weigh down on one's psyche in High School and it can be easy to lose one's self when trying to appease everyone, including the most popular individuals on campus. Seeing Cady struggle to retain her identity in the midst of layers upon layers of chicanery feels naturalistic and very accurate to the kind of social complications that feel apocalyptic in the mindset of a High School student.

Tina Fey's screenplay shows an incredible amount of authenticity when it comes to capturing the psyche of a High Schooler, but it should also be mentioned that, even putting aside the noteworthy amount of thoughtfulness incorporated into the script, maybe the best thing about Mean Girls is, simply put, just how constantly funny it is. Memorable quips and assorted pieces of dialogue come at a steady clip in an impressive manner that doesn't break the more naturalistic tendencies of the script, a sense of authenticity concerning its treatment of High Schoolers and their struggles for social acceptance is kept amidst the deluge of uproarious humor.

While pretty much everyone in the cast gets a notable humorous moment to shine, the highlights of the cast easily are Amanda Seyfried ("I can fit my whole fist in my mouth! Wanna see??") and Tim Meadows as a sorely underprepared principal. Mean Girls is basically this laugh riot of a movie with a super introspective gaze into the world of High School social circles. It's well-written, funny, chock full of super duper hilarious actors, Mean Girls more than earns its reputation as a noteworthy modern-day comedy.
Posted by Douglas Laman (NerdInTheBasement) at 6:32 AM