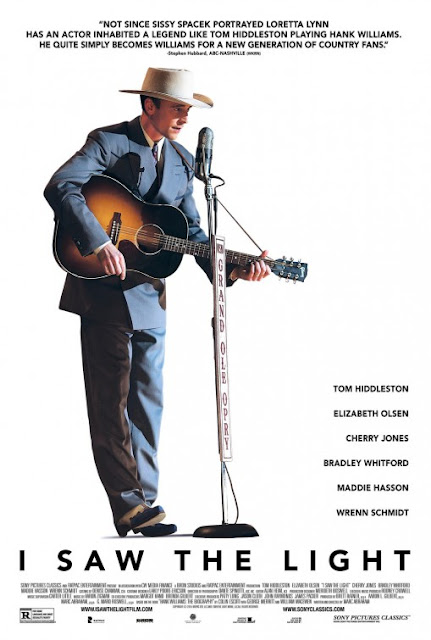 For those searching for a motion picture that examines the life of 1950's country music sensation Hank Williams in a remotely interesting way, well, you're gonna have to look elsewhere, because such a film is most certainly not what you'll find in the 2016 motion picture I Saw The Light. If you've been looking everywhere for the worst kind of musical biopic, the sort of movie that goes through a real-life individuals life with no compelling drama or filmmaking to speak of, well, I'd ask you what kind of life choices led to you pursuing such a hunt, but I suppose I Saw The Light fits such qualifiers.

I Saw The Light fits into that mold of biopic movie that attempts to cinematically re-tell the majority of a famous person's life instead of concentrating on a short segment of that individuals existence. The former approach tends to lead to a scattershot narrative and that's most certainly what happens here. Marc Abraham has created a script that attempts to shove in every event imaginable from Hank Williams life into a singular motion picture, with very few of these big events having much effect on one and another and Hank himself never becoming a fully fleshed out human being. He's got two modes; sly womanizer and alcoholic.

The actor stuck playing this shallow interpretation of Mr. Hank Williams is Loki himself, Tom Hiddleston, and he brings the only level of depth in the entire movie solely by the fact that he's obviously thrust himself into the role. He equips himself to the Southern twang in the dialogue, the requisite singing and those big puppy-dog eyes of his actually do work on an extra level for this character because it helps make it feel like there's pain and sorrow in Hank's eyes even in more happy scenarios. Alas, Hiddleston's effort really come through in only one or two scenes, otherwise he's trying but still comes as stagnant thanks to some poor directing and even worse writing.

Like I said, there's just no flow to the story itself, covering Hanks rise to fame without ever really giving a context for the level of fame he achieved or the way his songs impacted people. Nope, the movies in too much of a hurry to get going to the next real life event in Hanks life that it has no time to dawdle on actually growing its real-life protagonist into a human being. The whole movie has all of the energy and dramatic propulsion of that "Bueller...Bueller...Bueller" teacher reading off the Biography section of Hank Williams Wikipedia page.

I Saw The Light is more polished from a visual standpoint, though being better than this dismal script is not exactly the most sterling accomplishment. And Marc Abraham's direction as a filmmaker really isn't all that noteworthy either, with the only visual element of the entire that stands out being the aggravating repetitive use of awkward zoom-ins in random moments. Such an odd move that proves more distracting than anything else. And then there's the puzzling choice to have fictitious documentary footage scattered that comes and goes in the movie not to further emotional stakes or shine light on the finer intricacies of certain characters, but rather solely to provide clunky exposition.

It's very easy to see why this biopic just came and went in such a hurry from movie theaters this past Spring, it's truly a super inept movie that fails to really do anything of substance despite running for about two hours and centering its entire story on a real-life country singer who changed the musical genre forever. But the most this movie seems to have to say about Hank Williams through it all is "He sure did drink a lot, huh?" and "He sure was a good singer, huh?" and even my descriptions of those elements are honestly more nuanced than how I Saw The Light handles those parts of Hanks life.
Posted by Douglas Laman (NerdInTheBasement) at 6:12 PM